Who is an adolescent? Classification and definition of the adolescent period? Characteristicchanges during adolescence?

WHAT WILL YOU LEARN IN THIS LESSON?

Adolescence is derived from the Latin word “adolescere” meaning to grow into maturing. The World Health Organisation defines adolecence as any person between the age of 10 and 19. It is between child-hood and adulthood and is closely related to the teen age years.

ADOLESCENTS : Persons between 10and 19 years of age 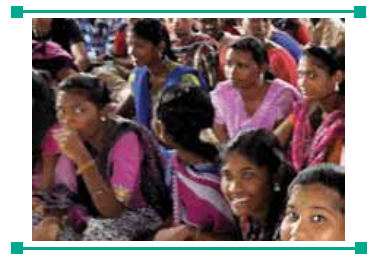 Stages of adolescence in boys and girls

The period of adolescence is extremely important in one’s life because at this stage, one moves from childhood to the onset of maturity. In every period of devel-opment from birth onwards a person may face many challenges due to the changes that occur during that period. Each phase in life has distinct characteristics.

Characteristics of the Adolescent Period

Adolescence is a period of transition. During this phase the individuals status is vague and there is a confusion about the roles they are expected to play as they are neither children nor adults.

The stage of adolescence is characterized by changes in physical, cognitive, social and emotional areas of their lives. This sets them apart and uniquely distinguishes them from other stages

Primary Sex characteristics- In males, the testes grow rapidly during the first year or two of puberty. After that, the penis starts to grow in length and the seminal ducts and the prostate gland enlarge. The female uterus, fallopian tube and vagina grow rap-idly through puberty. The ovaries produce ova and secrete the hormones needed for pregnancy, menstruation and the develop-ment of secondary sex characteristics. 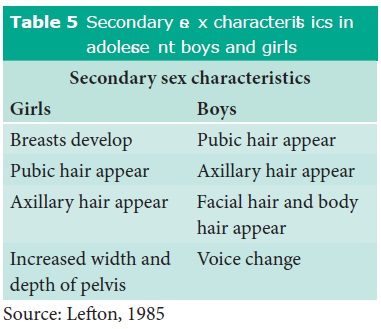 The secondary  sex  characteris tics are those which are not directly tied to reproduction yet distinguish the male from the female species. The secondary sex characteristics between boys and girls are given in the table above: 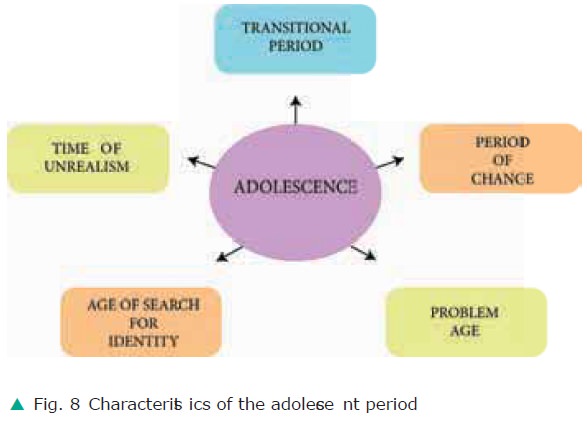 (b) Cognitive changes in adolescents .

In this stage, adolescents develop the abil-ity to process Information, improve in areas of decision making, memory, criti-cal thinking and self-regulatory learning. This is known as the ‘Formal Operation Stage of Development’

Crowds – they are made up of cliques and close friends

Organised groups – These groups are planned by orgainised sectors like schools, churches or community centres

Who are your chums? – What criteria do you have to select your confidants?

How many members are there in your clique? What are your common interests?

Are you part of an organized group? List any three social causes addressed by your group.

Every 5th person in India is an adolescent

– Hence adolescents are a very precious segment of the population.

Significant changes in the area of social development occur in the period of ado-lescence with regard to their peers and relationship with adults.

Relationship with peers- Adolescents are very much influenced by their peer group. Their behaviour and attitude are affected by peers.

Relationship with adults- Adoles-cents develop values different from the ones held by adults because the influence of peer group is more than that of adults. Hence the adolescent is torn between his loyalty to his parents and peers. Their values often clash with those of adults and many rebel against parental authority. 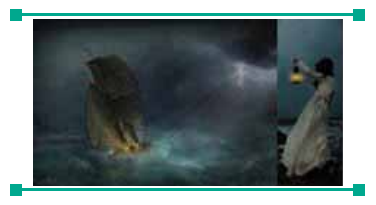 The major causes for heightened emotion-ality are as follows:

·     Psychological problems due to phys-ical changes – Sudden spurt in height, appearance of secondary sex characteris-tics, voice change, appearance of pimples and acne, on the face. etc. cause much embarrassment to them and they become worried about their physical appearances.

·     Social expectations- Adolescents are treated neither as a child nor as an adult. The constant pressure to live up to social expectations causes a generalized state of anxiety in them.

·     Unrealistic aspirations- Adolescent aspirations are sometimes unrealistic. When they are not able to attain them they feel inferior and frustrated.

·     Urge for sex- Reproductive hor-mones are active and so there is the presence of sex urge. This may lead to anxiety.

·           Identity crises- The adolescent is expected to form a realistic self-concept. They have to try out different roles and develop a holistic idea of their future role. Until they find their role they are often confused and anxious

·           Unfavorable  family  relationships- Conflicts often occur between adults and adolescents due to the generation gap between them.

(iii) Adolescence is a problem age

Adolescence is known as a problem age because they are faced with many chal-lenges that arise due to the anatomical, psychological changes. This is further enhanced by peer pressure and conflicts with parents and elders. Most of these problems are aggravated due to mislead-ing and misguiding parents, teachers and friends, ignorance of elders, being half informed or ill-informed about the real-ities in life and wrong messages and con-cepts depicted though the media

(iv) Adolescence is period when there is search for identity

Adolescence is the period of transition between childhood and adulthood. It is a stressful and confusing period because at times they are expected by the society to think and behave in mature manner. At the same time, they are often reprimanded for the same and are demanded to be meek and submis-sive as they are under the control of parents, elders and teachers. The conflicts that arise due to this, cause a lot of stress among ado-lescents as they are confused whether they should be like children or behave as adults.

(v) Adolescence is a time of unrealism

Many adolescents have unrealistic goals and aspirations. They live in an imaginary world. These unrealistic thinking pattern may often lead to anxiety and depression especially when they are not able to fulfill their goals. For this purpose, it is impor-tant for parents, teachers and elders to guide adolescents into identifying their strengths, weakness, opportunities and challenges and help them set realistic goals based on available resources.

National Youth Day is celebrated in India on 12 January on the birth-day of Swami Vivekananda. In 1984 the Government of India declared the day as the National Youth Day and since 1985 the event is celebrated in India every year. To quote from the Government of India's communica-tion, 'it was felt that the philosophy of Swamiji and the ideals for which he lived and worked could be a great source of inspiration for the Indian Youth.'

Delinquency is a problem associated with the period of adolescence. It is engaging in activities which are against law and are pun-ishable. When a delinquent act is committed by a child or young person before the age of age of 18 it is called juvenile delinquency.

ii.   Family causes- Children from bro-ken homes lack love and affection and a feeling of security. They tend to seek the comfort from peers involving antisocial activities

a.           Poor housing – Poor housing is a symbol of poor economic and social status. Overcrowding in poor houses and lack of privacy is said to be a cause for committing sex offences. 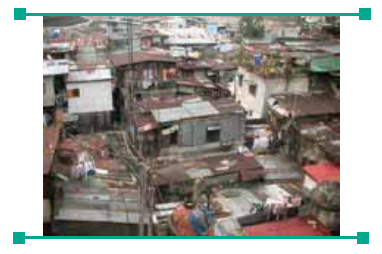 ·        Satisfactory adult-adolescent relation-ship, absence of feeling of rejection and presence of love and affection among members of the family will be of much help in preventing delinquency.

·        Mass media such as radio, television and newspaper should educate parents and the society on proper treatment of children.

·        Educational Institutions can have pro-grammes such as “Earn While You Learn” by engaging adolescents in use-ful activities.