The trait of impulsivity has been the subject of increasing in-terest in psychiatry.

The trait of impulsivity has been the subject of increasing in-terest in psychiatry. New research findings seem to associate various forms of impulsive behavior with biological markers of altered sero-tonergic function. These include impulsive suicidal behavior, impul-sive aggression and impulsive fire-setting. Impulsivity is also a focus of interest in the increasing attention paid to the behavioral phenome-nology of borderline personality disorder. In all these circumstances, impulsivity is conceived of as the rapid expression of unplanned be-havior, occurring in response to a sudden thought. (This is seen by some as the polar opposite of obsessional behavior, in which delibera-tion over an act may seem never-ending.) Although the sudden and unplanned aspect of the behavior may be present in the impulse dis-orders (such as in intermittent explosive disorder and kleptomania), the primary connotation of the word impulsivity, as used to describe these conditions, is the irresistibility of the urge to act.

The National Comorbidity Survey Replication (NCS-R) (Kessler et al., 2005) extended the definition of impulse control disorders described to include intermittent explo-sive disorder, attention deficit hyperactivity disorder (ADHD), conduct disorder (CD) and oppositional defiant disorder (ODD). This decision was based on the fact that ADHD and anger symp-toms often persist throughout adulthood. The NCS-R found that the combined lifetime prevalence for these disorders is greater than that of mood (20.8%) or substance abuse disorders (14.6%). Impulse control disorders in the extended definition had a 12 month prevalence of 8.9% and a lifetime prevalence of 24.8%. Moreover, this group was judged to have a greater proportion functioning at the serious level than either anxiety or substance abuse disor-ders. with approximately half of all lifetime cases receiving no treatment. An important objective in studying the impulse control disorders in this fashion was to highlight how common hostility and aggression are in psychiatric disorders, two dimensions often not receiving sufficient diagnostic consideration but which are significantly present as comorbidities with other disorders.

Trichotillomania, pyromania and pathological gambling may involve episodes in which a sudden desire to commit the act of hair-pulling, fire-setting, or gambling is followed by rapid expression of the behavior. But in these conditions, the individual may spend considerable amounts of time fighting off the urge, trying not to carry out the impulse. The inability to resist the impulse is the common core of these disorders, rather than the rapid transduction of thought to action. A decision tree for the differen-tial diagnosis of impulsive behaviors may be seen in Figure 60.1. 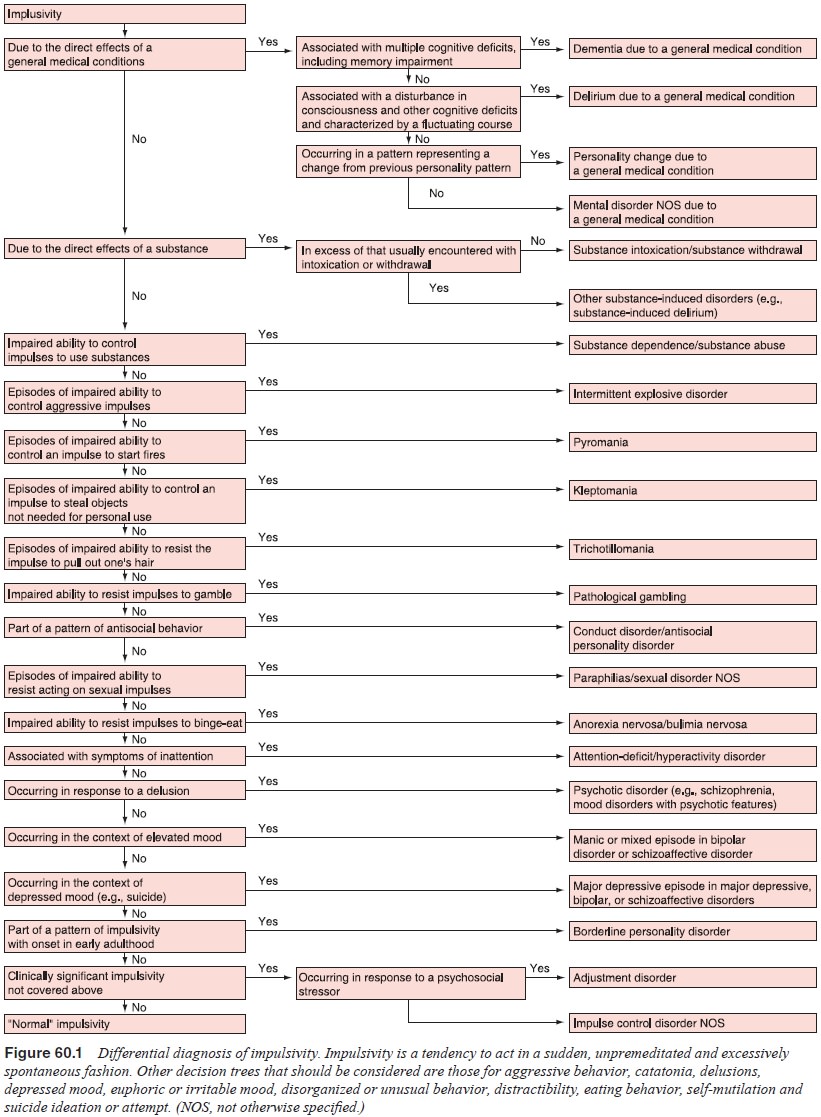 Other than sharing the essential feature of impulse dyscon-trol, it is unclear whether the conditions bear any re-lationship to each other. Emerging perspectives on the neurobiology of impulsivity suggest that impulsive behaviors, across diagnostic boundaries, may share an underlying pathophysiological diathesis. As noted earlier, markers of altered serotonergic neurotransmission have been associated with a variety of impulsive behaviors: suicid-ality, aggressive violence, pyromania and conduct disorder. These observations have led to speculation that decreased serotonergic neurotransmission may result in decreased ability to control urges to act. In accord with this model, these disorders may be varying expressions of a single disturbance – or closely related disturbances – of serotonergic function. Although such markers of altered sero-tonergic function have been demonstrated among impulsive fire-setters and impulsive violent offenders, there is, as yet, insufficient research on these conditions to accept or dismiss this theory.

It has been noted that these conditions are embedded in similar patterns of comorbidity with other psychiatric disorders. High rates of comorbid mood disorder and anxiety disorder ap-pear typical of these disorders. This contextual similarity, com-bined with the common feature of impulsivity, may further sup-port the notion that these conditions are – at the level of core diathesis – related to each other.

Although these conditions have historically been consid-ered uncommon, later investigations suggest that some of them may be fairly common. Trichotillomania, for example, was once considered rare. However, surveys indicate that the lifetime prev-alence of the condition may exceed 1% of the population. Patho-logical gambling may be present in up to 3% of the population. Extrapolation from the known incidence of comorbid conditions suggests that kleptomania may have a 0.6% incidence. It would seem reasonable to suspect that individuals with pyromania and kleptomania may seek to avoid detection and may therefore be underrepresented in research and clinical samples.

The aggressive quality of kleptomania, pyromania and intermittent explosive disorder and the self-damaging nature of trichotillomania and pathological gambling have presented tempting substrates for the application of traditional analytical concepts. From this perspective, these behaviors have been seen as symptomatic expressions of unconscious conflict, often sexual in nature. Other formulations include desires for oral gratification and masochistic wishes to be caught and punished, motivated by a harsh, guilt-inducing superego. The increasing influence of object relations theory was reflected in increasing emphasis on narcissistic psychopathology and histories of disturbed early par-enting. As successful behavioral interventions were developed for other conditions, case reports of behavioral treatments for these conditions emerged. Reports of hypnotic treatments are also prominent in the literature.

The contemporary medical and psychological literature reflects, not surprisingly, prevailing general interests in current research and theory. As pharmacological treatments are applied to an increasing range of symptoms, the impulse disorders present new opportunities to widen the application of thymoleptic and anxiolytic and, more recently, (atypical) neuro-leptic medication. Some are reconceptualizing the idea of mood and obsessional disorders, widening them into affective and ob-sessional spectrums, encompassing various impulse disorders into these domains.

As part of the ongoing dynamic of evolving theory, the very concept of impulsivity is still in ferment. Attempts further to refine the idea of impulsivity are reflected in a perspective of-fered by Van Ameringen and associates (1999). In a discussion of preliminary evidence indicating that trichotillomania may be preferentially responsive to neuroleptics, they suggest that indi-viduals with trichotillomania may have features in common with the subgroup of obsessive compulsive disorder (OCD) patients who have comorbid Tourette’s syndrome (TS). These authors offer a thoughtful model, applying the idea of an “Impulsion” (Shapiro and Shapiro, 1992), an action performed until a sense of “rightness” is achieved, rather than a compulsion, which is de-signed to reduce an anxiety brought on by an obsession. They go on to note one formulation of OCD, which divides symptoms into three types: symmetry/hoarding, pure obsessions and contamina-tion/cleaning. The symmetry/hoarding factor – impulsion-driven behavior – was differentially related to OCD with comorbid TS. They point to recent data suggesting that the OCD/TS subgroup is not as responsive to SSRI medication alone as other OCD sub-types, but responds better to SSRI/neuroleptic combinations. These observations, taken together with their report of enhanced response of trichotillomania to neuroleptics, is the basis for their argument that trichotillomania should be seen as more similar to OCD/TS then OCD, more impulsion than compulsion. The idea of anxiously seeking “rightness” is consistent with the clinical experience of many individuals with trichotillomania and is a thoughtful addition to the other attributes associated with impul-sivity: anxiety reduction, irresistibility of action and rapidity of its execution.

Trichotillomania provides an example of the convergence of current research techniques and treatment perspectives. The absence of new psychodynamic formulations would seem to re-flect not an abandonment of dynamic theory but an acceptance that such models are most useful in understanding individual patients rather than providing universal explanations for the symptom. Dynamic considerations may be useful in trying to understand why particular circumstances may provoke episodes of the problem behavior for a particular individual.

Not all these conditions are, as yet, receiving significant attention. Trichotillomania, intermittent explosive disorder andpathological gambling have become the focus of increasing inter-est. Kleptomania and pyromania, however, remain stepchildren of research. Perhaps the legal implications of these behaviors and their entanglement with similar, but not impulsively motivated, behaviors complicate the availability of sufficient cases to facili-tate research.

Because of the limited body of systematically collected data, the following sections largely reflect accumulated clinical experience. Therefore, the practicing psychiatrist should be par-ticularly careful to consider the exigencies of individual patients in applying treatment recommendations.