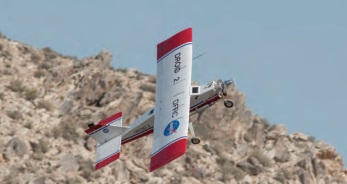 This research project is testing and validating automatic iGCAS software technology for use on UAVs in a variety of terrain conditions. The technology outperformed engineering expectations in a series

of demonstration flights using a small, remotely operated integrated drone research plane. The team adapted the iGCAS software into an application for the Android smart phone linked to a small Piccolo Autopilot. The small drone is an affordable, low-risk, and effective way to test the miniaturized iGCAS system before an operational system can be installed on a multi-million-dollar unmanned aircraft like Armstrong's Ikhana, which is one of the project's eventual goals.

Work to date: The project team successfully validated the iGCAS software in a series of UAV flight tests on the Dryden Aeronautical Test Range. The iGCAS repeatedly executed pull-ups and sharp turns to avoid imminent terrain impact and many times extricated the UAV from a box canyon.

Looking ahead: When fully developed and matured, the miniaturized iGCAS technology could have wide applications for potential use in general aviation aircraft, including crewed and remotely/autonomously operated unmanned aircraft systems. In 2014 the research team intends to incorporate obstacle avoidance and a specialized pilot interface for general aviation use.

Increases safety: Provides the framework for analytical systems that can learn, predict, and adapt to both routine and emergency situations

Portable and affordable: Enables implementation on existing aircraft systems and on tablets and smart phones

Researchers at Armstrong are dramatically improving upon existing ground collision avoidance technology for aircraft. Controlled flight into terrain remains a leading cause of fatalities in aviation, resulting in roughly 100 deaths each year in the United States alone. Although warning systems have virtually eliminated this problem for large commercial air carriers, the problem still remains for fighter aircraft, helicopters, and general aviation.

Armstrong innovators have been working with the U.S. Air Force for more than 25 years to develop automatic col-lision avoidance technologies for fighter aircraft that would reduce the risk of ground collisions, the leading cause of fatalities in both military and general aviation. The result of the collaboration is lifesaving technology that incorporates onboard digital terrain mapping data with data-adaptive algorithms that predict impending ground collisions.