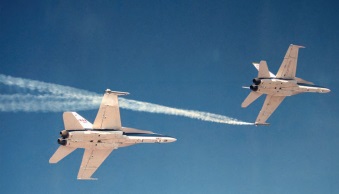 Experimental in-flight evaluations have demonstrated that the concept of formation flight can reduce fuel consumption of trailing aircraft by 10 percent. Armstrong researchers have developed a peak-seeking control algorithm that can increase this efficiency by another 2 percent. The innovation works by optimizing, in real time, the lift distribution

across the wing of an airplane flying within the wingtip vortex of another airplane. Conventional trim schedules use anti-symmetric aileron deflections to counter roll asymmetries and keep the wings level. In formation flight, however, this approach can 'dump' lift near the wingtip where the vortex effects are greatest, reducing the amount of benefit gained. The peak-seeking solution instead uses all available control surfaces across the span of the wing to find the best solution to maintain trimmed flight within the vortex.

Work to date: The research team has developed a simulation that includes probabilistic models of the wind-drift and descent of aircraft wakes, the aerodynamic interference effects of wingtip vortices on other aircraft, and formation guidance and control laws.

Increasing efficiency in aerospace systems is a key goal across the spectrum of NASA operations.

Armstrong researchers are constantly striving to build efficiency into all phases of flight projects, through development, fabrication, and operations processes.

From a new wing design that could exponentially increase total aircraft efficiency to a novel test stand for single-engine electric aircraft, our researchers are finding unique solutions that increase efficiency.