1. Define resonance. What is the condition for resonance for an RLC series circuit?

A circuit is said to be in resonance when the applied voltage and current are in phase. For an RLC series circuit, at resonance the inductive and capacitive reactance are equal.

2. How the RLC series circuit behaves for the frequencies above and below the resonant frequencies.

3. Derive the expression for resonant frequency.

At resonance condition, the inductive and capacitive reactances are equal. 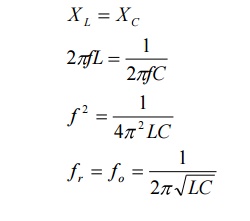 The frequency at resonance is called as resonant frequency.

It is also defined as the geometric mean of two half power frequencies is called resonant frequency.

6. Draw the curves for variation of impedance, admittance and current with frequency in RLC series resonance circuit.

It is the ratio between capacitor voltage or inductor voltage at resonance to supply voltage is called as Q-factor or quality factor.

It is defined as the width of the resonant curve upto frequency at which the power in the circuit is half of its maximum value. The difference between two half power frequencies is also called as band width.

It is the ratio of bandwidth to resonant frequency.

Selectivity of a resonant circuit is its ability to discriminate between signals of desired and undesired frequencies.

The frequencies at which the power in the circuit is half of its maximum value are called as half power frequencies.

11.Give the relationship between

b) Resonant frequency and half power frequencies

c) Quality factor in terms of R, L and C 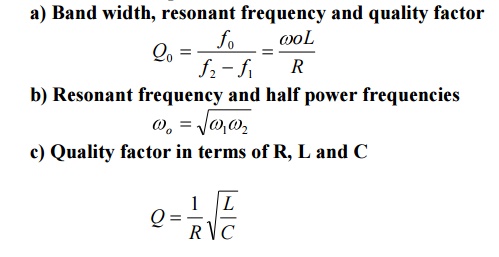 12. In series resonance circuit, on resonance the following will occur

The inductive and capacitive reactances are same 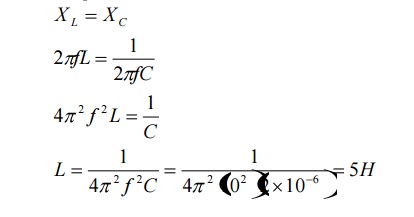 14. A series resonant circuit is capacitive at f=150 HZ, The circuit will be inductive some where at

16.An RLC circuit consists of a resistance of 1000W,an inductance of 100 mH and a capacitance of 10μF.The Q factor of the circuit is

17. Write the characteristics of series resonance.

i)  The power factor is unity

ii) Impedance of the circuit is minimum

iii)  Admittance of the circuit is maximum

v)The magnitude of the voltage across inductance and capacitance will be Q times the supply voltage, but they are in phase opposition.

18. Write the expression for half power frequencies of RLC series circuit.

21. A series RLC circuit is excited with 10V sinusoidal source resonate at a frequency of 50HZ.If the bandwidth is 5HZ.What will the voltage across capacitance? 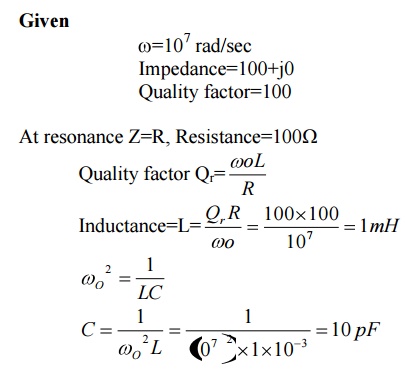 24. What is anti resonance?

25. Write the expressions for quality factor of parallel RLC circuit.

26. Write the expression for half power frequencies of parallel RLC circuit.

The resistance of the RLC parallel circuit at resonance is called dynamic resistance.

28.Write the characteristics of parallel resonance.

i)  At resonance, admittance is minimum and equal to conductance, therefore current is minimum.

iii) At resonance, the magnitude of current through inductance and capacitance will be Q times the current supplied by the source, but they are in phase opposition.

28.Draw the curves for variation of impedance, admittance and current with frequency in RLC parallel resonance circuit.

31. Why is a series resonance circuit regarded as acceptor circuit?

A series resonance circuit has a capability to draw heavy currents and power from the mains. So it is regarded as acceptor circuit.

32. Why is a parallel resonance circuit regarded as rejecter circuit?

A parallel resonance circuit has a capability to very small currents and power from the mains. So it is regarded as rejecter circuit.

33. A coil of resistance R, an inductance L is shunted by a capacitor C and this parallel combination is under resonance. What is the resonate frequency of the circuit?

34. Find the resonant frequency in the ideal parallel RLC circuit with L=40 mH and c=0.01μF.

36. What is the nature of power factor if the frequency of operation is less than the resonance frequency in a RLC series circuit?

37. Draw the variation of reactance with frequency in series resonance circuit.

38. Draw the variation of susceptance with frequency in parallel resonance circuit 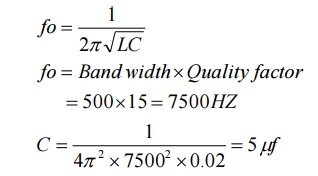 40. What is magnetic coupling?

When two coils are placed close to each other, magnetic flux produced in one coil will be linking partially or fully with the other coil. This is called magnetic coupling.

It is the property of electromagnetic fields that whenever a coil has an alternating current passed through it, an emf is induced in it due to the alternating magnetic field surrounding the coil. Types of induced emf

(i)  Self induced emf

When two coils are placed very close to each other. an emf is induced in the other coil also, which is called mutually induced emf.

It is defined as the flux linkages per unit current. There are two types of inductance.

Self inductance of a coil is defined as the flux linkages per unit current flowing through the coil. Its unit is Henry.

The self induced emf in a coil can be expressed in terms of self inductance.

Mutual inductance between two coils is defined as the flux linkages in one coil due to unit current in other coil. Its unit is Henry.

e1 is the induced emf in coil 1 due to a current i2 flowing in coil 2.

47. What are coupled circuits?

The coupled coils refer to circuits involving elements with magnetic coupling. If the flux produced by an element of a circuit links other elements of the same circuit or near-by circuit then the elements are said to have magnetic coupling.

48. What are coupled coils?

In coupled coils, the coefficient of coupling is defined as then fraction of the total flux produced by one coil linking another coil.

50.What is dot convention? Why it is required?

If current enter into (or out of) the dot in one coil and in other coil current flows out of (or into) the dot, then the mutually induced voltage will have polarity opposite to that of self induced voltages.

52. Two coupled coils have a self inductances 37.5 mH and 193 mH,with the mutual inductance of 63.75 mH.Find the co efficient of coupling. 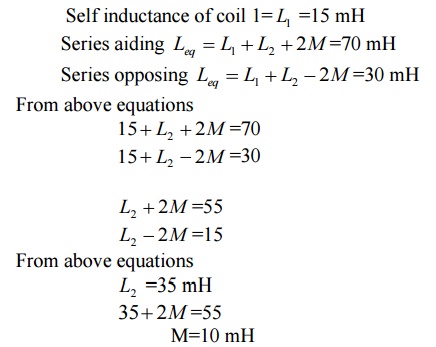 55. Write the expression for equivalent inductance of two coupled coils connected in series.

56. Write the expression for equivalent inductance of two coupled coils connected in parallel.

57. Write the relation between self and mutual inductance

58. What is the maximum possible mutual inductance of two inductively coupled coils with self inductances of 50mH and 200 mH?

59.59. Find the equivalent inductance of the circuit shown.

59.What is tuned coupled circuit?

61. Why and where the tuned coupled circuits are employed?

The tuned coupled circuits are mainly used to transfer energy from a weak source to a load or employed for maximum power transfer from one circuit to another circuit. This is possible only when both coils work at resonance condition.

62. What is single tuned circuit?

63. What is double tuned circuit?