When the body vibrates under the influence of external force, then the body is said to be under forced vibrations.

2. What are the types of external excitation?

3. What is the vibration isolation?

The term vibration isolation refers to the prevention or minimization of vibrations and their transmission due to the unbalanced machines.

4. Specify the importance of vibration isolation?

5. When does resonance takes place in a system?

When the frequency of external force is equal to the natural frequency of a vibrating body, the resonance occurs. At resonance, the amplitude of vibration becomes exclusively large.

When a machine is supported by a spring, the spring transmits the force applied on the machine to the fixed support or foundation. This is called as transmissibility.

7. What is meant by harmonic forcing?

The term harmonic refers to a spring-mass system with viscous damping, excited by a sinusoidal harmonic force.

9. What is the role of transmission ratio?

Transmission ratio, also known as transmissibility, is a measure of the effectiveness of the vibration isolation material.

10. What is meant by dyn amic magnifier or magnification factor? What are the factors on which it dep end?

It depends on: (i) the ra tio of circular frequencies

11.Write down the expression for amplitude of forced vibration. ?

12. List out the materials u sed for vibration isolation. Laso which ma terial is most suitable for compressiv e loads?

Cork is suitable for compressive loads because it is not perfec tly elastic. At high loads it becomes more flexible.

13. Show that for effective isolation of vibration, frequency ratio r >√ 2.

When r >√2, the n transmissibility is less than one for all valu es of damping factor. This means that the tran smitted force is always less than the excited force.

14. Sketch the graph for ( ω/ωn) Vs Transmissibility for different values of damping factor. 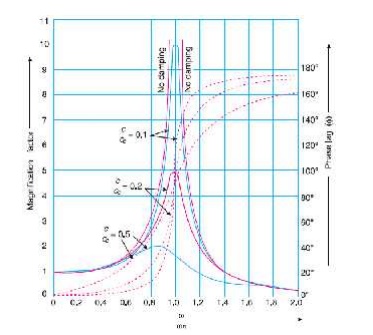 15. What are the methods of isolating the vibration?

• High speed en gines/machines mounted on foundation a nd supports cause vibrations of ex cessive amplitude because of the unbalance d forces. It can be minimized by p roviding “spring-damper” , etc.

• The materials u sed for vibration isolation are rubber, felt c ork, etc. These are placed between the foundation and vibrating body.

2.             A mass of 500 kg is mounted on supports having a total stiffness of 100 kN/m and which provides viscous damping, the damping ratio being 0.4. The mass is constrained to move vertically and is subjected to a vertical disturbing force of the

type F cos ω t. Determine the frequency at which resonance will occur and the maximum allowable value of F if the amplitude at resonance is to be restricted to 5mm