1.What is meant by a free electron?

The electron moves freely in all directions in the absence of electric field is called free electron (or) valance electron. These electrons collide with each other, the collisions are perfectly elastic collisions hence there is no loss of energy. Since the free electron is in random motion.

Drift velocity (Vd) is the average velocity acquired by an electron in a particular direction due to applied electric field.

The average distance travelled by an electron between two successive collisions is called mean free path.

Relaxation time is the time taken by the electron to reach equilibrium position from its disturbed position in the presence of electric field.

The electrical conductivity is defined as the quantity of electricity flowing per unit area per unit time at a constant potential gradient.

Thermal conductivity of material is defined as the amount of heat flowing through an unit area per unit time of temperature gradient.

9.List out the three main theories developed to describe the structure of materials. (or) List the types of electron theory of metals.

10. What are the Sources of resistance in metals?

The resistance in metals is due to

Presence of impurities in the metals.

Temperature of the metal.

11. What is the effect of temperature on metals

12. What are the uses (or) success of classical free electron theory?

It is used to verify the Ohm’s law.

It is used to derive Widemann-Franz law.

3. It is used to explain the optical properties of metal.

It is a macroscopic theory.

This theory cannot explain the electron conductivity of semiconductors and insulators.

The Lorentz number obtained by classical theory does not have good agreement with experimental value and it is rectified by quantum theory.

14. What is Lorentz Number?

It is found that the classical value of Lorentz number is only one half of the experimental value (2.44 × 10–8 W K–2). The discrepancy of L value is the failure of the classical theory. This can be rectified by quantum theory.

15.What is the basic assumption of Zone theory or Band theory of solids?

According to quantum free electron theory, the electrons in a metal were assumed to be moving in a region of constant potential but it fails to explain, why some solids behave as conductors, some as insulators and some as semiconductors.

Therefore instead of considering an electron to move in a constant potential, the Zone theory of solids tells that the electrons are assumed to move in a field of periodic potential. 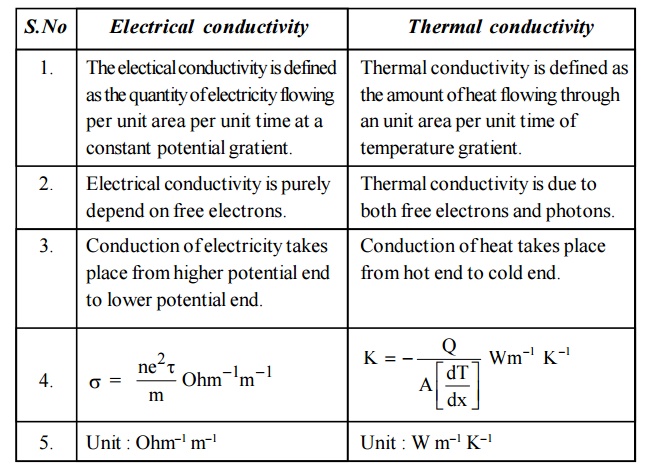 The electical conductivity is defined as the quantity of electricity flowing per unit area per unit time at a constant potential gratient.

Electrical conductivity is purely depend on free electrons.

Thermal conductivity is defined as the amount of heat flowing through an unit area per unit time of temperature gratient.

Thermal conductivity is due to both free electrons and photons.

17.What are the similarities between electrical and thermal conductivity of metals?

The electrical and thermal conductivities decrease with the increase in temperature and impurities.

The electrical and thermal conductivity is very high at low temperatures.

For non-metals the electrical and thermal conductivity is very less.

19. Write microscopic form of Ohm’s law and state whether it is true for all temperature.

Microscopically we can write V = IR as J =  E

What are the factors that affect the electrical resistivity of materials?

Fermi level  :         The Fermi level is the highest reference energy level of a particle at absolute zero.

Fermi energy:       It is the maximum energy of the quantum state corresponding to Fermi energy level at absolute zero.

Importance :         Fermi energy determines the energy of the particle at any temperature.

It is an expression for the distribution of electrons among the energy levels as a function of temperature and it is the probability of finding an electron in particular energy state of energy E is given by,

23.Define density of states and its importance.

Importance : It is used for the Fermi energy calculation at any temperature.

It is define as the minimum energy required to remove an electron from the metal surface at 0K. in order to make it escape, an additional amount of energy equal to is required. i.e., .This difference in energy is called Work function.

25.What do you mean by carrier concentration in metal?

26. How classical free electron theory failed to account for specific heat of solid?