11.3. Calculation of Carrier Concentration at 0 K

In a solid, due to the boundaries of neighbouring atoms overlap each other, the valence electrons find continuity from atom to atom. Therefore, they can move easily throughout the solid. All such valence electrons of its constituent atoms in a solid are called free electrons.

Current density (J) is defined as the current per unit area of cross section of an imaginary plane hold normal to the direction of flow of current in a current carrying conductor.

Conducting materials are classified in to three major categories based on the conductivity.

The super conductors like alloys of aluminium, zinc, gallium, niobium, etc., are a special class

The metals like silver, aluminium and alloys have high electrical conductivity. These materials are called low resistive materials.

They are used as conductors, electrical co

Such a metals and alloys are used in the manufacturing of resistors, heating elements, resistance thermometers.

We know that the electrons in the outermost orbit of the atom determine the electrical properties in the solid. The free electron theory of solids explains the structure and properties of solids through their electronic structure.

This theory is applicable to all solids, both metals and non metals. It explains

(i). The behavior of conductors, semiconductors, and insulators. (ii). The electrical, thermal and magnetic properties of solids.

So far three electron theories have been proposed.

It is a macroscopic theory, proposed by Drude and Lorentz in1900. According to this theory, the free electrons are mainly responsible for electrical conduction in metals. This theory obeys laws of classical mechanics.

It is a microscopic theory, proposed by sommerfeld in 1928. According to this theory, the electrons in a metals move in a constant potential. This theory obeys laws of quantum mechanics.

Bloch proposed this theory in the year 1928. According to this theory, the free electrons move in a periodic potential. This theory explains electrical conductivity based on the energy bands.

Free electron theory of metals was proposed by P. Drude in the year 1900 to explain electrical conduction in metal. This theory was further extended by H.A. Lorentz in the year 1909.

According to this theory, a metal consists of a very large number of free electrons. These free electrons can move freely throughout the volume of the metal. They are fully responsible for the electrical conduction in the metal.

We know that an atom consists of a central nucleus with positive charge surrounded by the electrons of negative charge. The electros in the inner shells are called core electros and those in the outermost shell are called valence electrons. 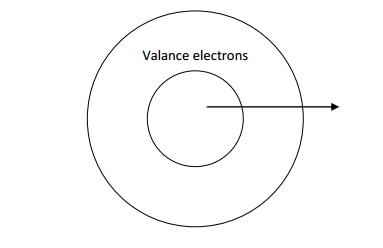 Drude assumed that the free electrons in a metal form an electron gas. These free electrons move randomly in all possible directions just like the gas molecules in a container.

In the absence of electrical field

When an electrical field is not applied, the free electrons move everywhere in a random manner. They collide with other free electrons and positive ion core. This collision is known as elastic collision. 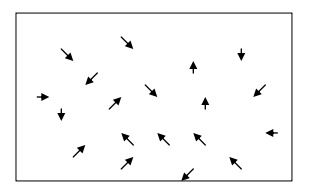 In the presence of electric field 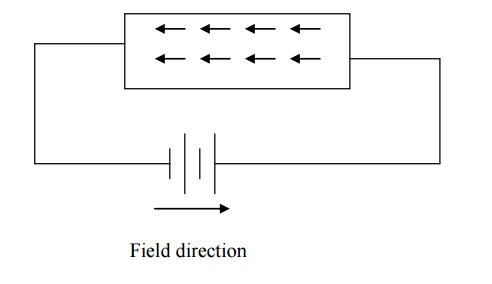 Since electrons are assumed to be a perfect gas, they obey the laws of kinetic theory of gases.

It is defined as the average velocity acquired by the free electrons in a metal in a particular direction by the application of an electrical field.

The average distance travelled by a free electron between any two successive collisions in the presence of an applied electric field is known as mean free path. It is the product of drift velocity of free electron and collision time ( ι c).

The average time taken by a free electron between any two successive collisions is known as collision time. It is expressed mathematically as

The average time taken by a free electron to reach its equilibrium position from its disturbed position due to the application of an external electrical field is called relaxation time. It is approximately equal to 10-14 second.

We know in the absence of external electric field, the motion of electrons in a metal moves randomly in all directions. When electric fi rod, the electron moves in opposite direction to the applied field with velocity v d. this velocity is known as drift velocity.

This force is known as driving of the electron. Due to this force, the electron gains acceleration ‘a’. From motion, the Newton’s force second law of

The acceleration of electron is given by

Where ‘σ’ is the electrical conductivity of velocity is given as

Substituting equation (5)in (7), we have

From microscopic form of Ohm’s law, the current density ‘J’ is expressed as,

From equation (10), we know that with increase of electron concentration ‘n’ , the conductivity ‘σ’ increases. As m* increases, the motion of electron becomes slow and the electrical conductivity.

It is defined as the amount of heat flowing per unit time through the material having unit area of cross section per unit temperature gradient.

Thermal conductivity of the material

Let us consider a uniform rod AB with temperatures T1 (Hot) at end A and T2 (cold) at end B. Heat flows from hot end A to the hold end B. Let us consider cross sectional area C which is at a distance equal to the mean free path (λ) of t in fig.

The conduction electron per unit value is n and average velocity of these electrons is v.

Similarly, the deficient of energy carried from B to A per unit area per unit time

Hence, the net amount of energy transferred from A to B per unit area per unit time

But from the basic definition of thermal conductivity, the amount of heat conducted per unit area per unit time

We know that for the metals

Substituting equation 8 in the equation 7, we have

Where L is a proportionality constant. It is known as Lorentz number. Its value is 2.44 X 10-8

We know that the kinetic energy of an electron

Substituting equation 4 in equation 3, we have

Thus it is proved that, the ratio of thermal conductivity to electrical conductivity of a metal is directly proportional to the absolute temperature of the metal.

Wiedamann –Franz law clearly shows that if a metal has high thermal conductivity, it will also have high electrical conductivity.

The ratio of thermal conductivity (K) of of the metal and absolute temperature (T) of the metal is a constant. It is known as Lorentz number

and it is given by

2.     The electrical and Thermal conductivities of metals can be explained by this theory.

4.     It is used to explain the optical properties of metals.

It is a macroscopic theory

The Lorentz number by classical theory does not have good agreement with experimental value and it is rectified by quantum theory.

The drawbacks of classical theory can be rectified using quantum theory. In classical theory the properties of metals such as electrical and thermal conductivities are well explained on the assumption that the electrons in the metal freely moves like the particles of gas and hence called free electron gas.

According to classical theory, the particles of gas (electrons) at zero Kelvin will have zero kinetic energy, and hence all the particles are at rest. But according to quantum theory when all particles at rest, all of them should be filled only in the ground state energy level, which is impossible and is controversial to the pauli’s exclusion principle.

Thus in order to fill the electrons in a given energy level, we should know the following. Energy distribution of electrons

Probability of filling an electron in a given energy state, etc.,

The classical and quantum free electron theories failed to explain many electrical and thermal properties of solids. However, these properties can be easily understood using Fermi –Dirac statistics.

The expression which gives the distributions of electrons among the various energy levels as a function of temperature is known as Fermi distribution function. It is the probability function F(E) of an electron occupying given energy level at absolute temperature. It is given by

E –Energy of the level whose occupancy is being considered

EF –Energy of the Fermi level

Effect of temperature on Fermi function

The effect of temperature on Fermi function F(E) can be discussed with respect to equation 1.

At 0 kelvin, the electron can be filled only upto a maximum energy level called Fermi energy level (EF0), above EF0 all the energy levels will be empty. It can be proved from the following conditions.

(i.e 100% chance for the electron to be filled within the Fermi energy level)

(i.e zero% chance for the electron not to be filled within the Fermi energy level)

(i.e 50% chance for the electron to be filled within the Fermi energy level)

This clearly shows that at 0 kelvin all the energy states below EF0 are filled and all those above it are empty.

The Fermi function at 0 kelvin can also be represented graphically as shown in fig . 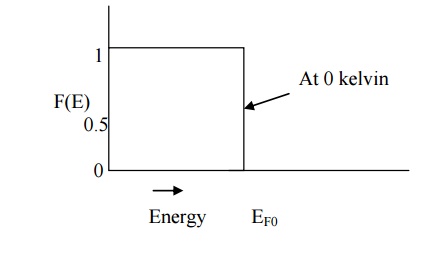 Thus it act as a reference level which separates the vacant and filled energy states at 0k. It gives the information about the filled electron states and the empty states.

When the temperature is increased, few electrons gains thermal energy and it goes to higher energy levels.

In the quantum free electron theory, though the energy levels are descrete, the spacing between consecutive energy level is very less and thus the distribution of energy levels seems to be continuous.

The number of energy levels N(E) that are filled with electrons per unit energy increases parabolic ally with increase of energy E as shown in fig. 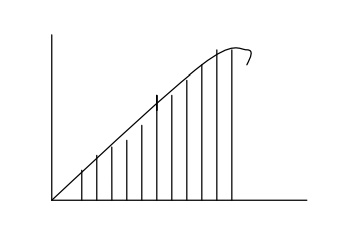 Each energy level can provide only two states, namely, one for spin up and other for spin down and hence only two electrons can be exclusion principle.

The electrons are filled in a given energ no two electrons can have the same set of four quantum numbers.

At room temperature, the electrons within the range of KBT below the Fermi energy level will absorb thermal energy = KBT and goes to higher energy states with energy EF0 + KBT.

Density of states Z(E)dE is defined as the number of available electron states per unit volume in an energy interval (dE).

In order to fill the electrons in an energy state we have to first find the number of available energy states within a given energy interval.

We know that a number of available energy levels can be obtained for various combinations of quantum numbers nx, ny, and nz . (i.e) n2 = nx2 + ny2 + nz2

Therefore, let us construct three dimensional space of points which represents the quantum numbers nx, ny, and nz as shown in fig. in this space each point represents an energy level.

11.2.DERIVATION OF DENSITY OF ENERGY STATES

Since nx, ny, and nz will have only positive values, we have to take only one octant of the sphere (i.e) 1/8 th of the sphere volume. 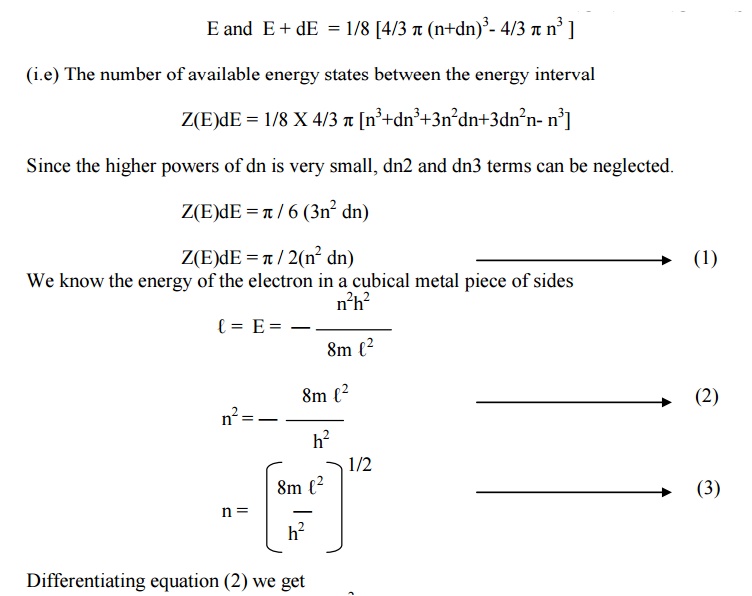 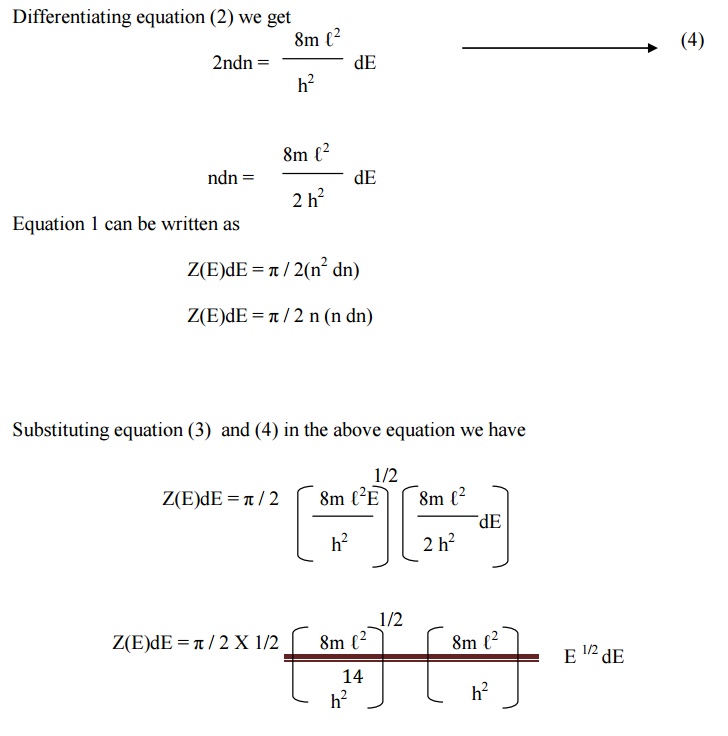 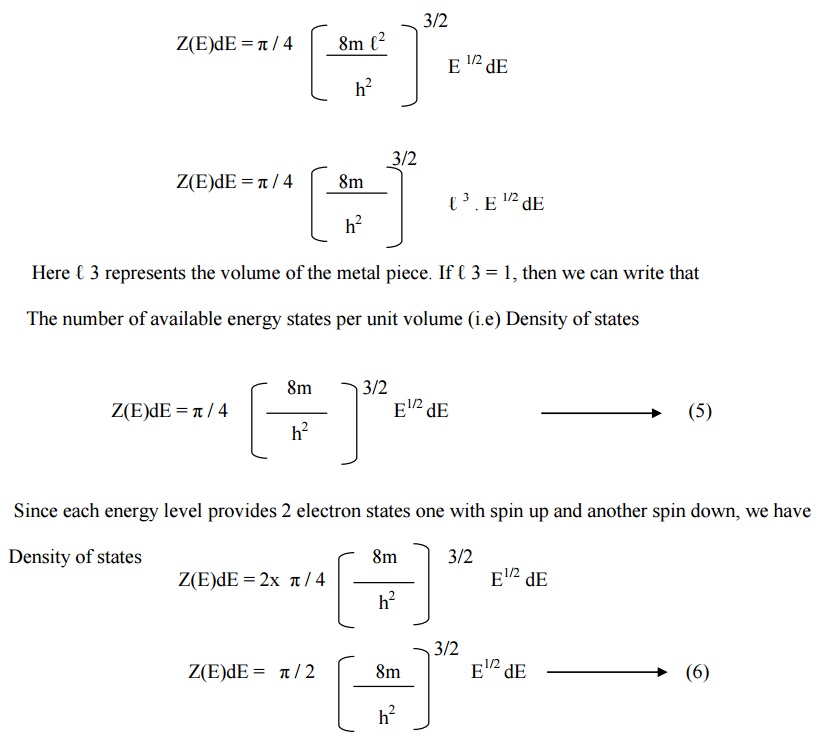 Let N(E) dE represents the number of filled energy states between the interval of energy dE . Normally all the energy states will not be filled. The probability of filling of electrons in a given energy state is given by Fermi function F(E).

Substituting equation (6) in equation (7), we get

N(E) is known as carrier distribution function (or) carrier concentration in metals.

11.5.AVERAGE ENERGY OF AN ELECTRON AT OK