7.1 Expression for thermal conductivity (K) of an electron

10.1 Effect of Temperature on Fermi Function

11.2 Average energy of an electron at 0K

The electron theory of solids explains the structures and properties of solids through their electronic structure. This theory is applicable to all solids both metals and non metals. This theory also explains the bending in solids behavior of conductors and insulators, electrical and thermal conductivities of solids, elasticity and repulsive forces in solids etc,.. The theory has been developed in three main stages.

This theory was developed by Drude and Lorentz. According to this theory, a metal consists of electrons which are free to move about in the crystal molecules of a gas it contains mutual repulsion between electrons is ignored and hence potential energy is taken as zero. Therefore the total energy of the electron is equal to its kinetic energy.

Bloch developed the theory in which the electrons move in a periodic field provided by the Lattice concept of holes, origin of Band gap and effective mass of electrons are the special features of this theory of solids. This theory also explains the mechanism of super conductivity based on band theory.

A Solid metal has nucleus with revolving electrons. The electrons move freely like molecules in a gas.

The free electrons move in a uniform potential field due to the ions fixed in the lattice.

In the absence of electric field (E=0), the free electrons move in random directions and collide with each other. During this collision no loss of energy is observes since the collisions are elastic as shown in figure.

Since the electrons are assumed to be perfect gas, they obey the laws of classical theory of gases.

The drift velocity is defined as the average velocity acquired by the free electron in particular direction, due to the applied electric field.

The mobility is defined as the drift velocity (Vd) acquired by the electron per unit electric field (E).

The average distance travelled by a electron between two successive collision is called mean free path.

It is the time taken by the free electron between two successive collision.

It is the time taken by the electron to reach equilibrium position from disturbed position in the presence of electric field.

Where l is the distance travelled by the electron. The value of relaxation time is of the order of 10–14 sec.

It is defined as the current per unit area of cross section of an imaginary plane holded normal to the direction of the flow of current in a current carrying conductor.

It is used to verify Ohm’s law.

It is used to derive Widemann-Franz law.

It is used to explain the optical properties of metal.

It is a macroscopic theory.

This theory cannot explain the electrical conductivity of semiconductors and insulators.

The Lorentz number obtained by classical theory does not have good agreement with experimental value and theoritical value, it is rectified by quantum theory.

The electrical conductivity is defined as the quantity of electricity flowing per unit area per unit time at a constant potential gradient. 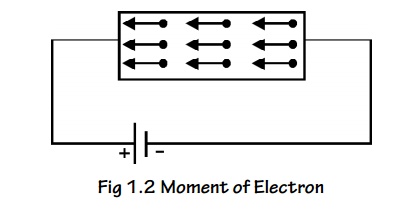 When an electric field (E) is applied to a conductor the free electrons are accelerated and give rise to current (I) which flows in the direction of electric filed flows of charges is given in terms of current density.

Let ‘n’ be the number of electrons per unit volume and ‘e’ be the charge of the electrons.

The negative sign indicates that the direction of current is in opposite direction to the movement of electron.

Due to the applied electric field, the electrons acquire an acceleration ‘a’ can be given by 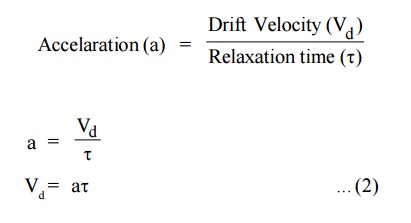 When an electric field of strength (E) is applied to the conductor, the force experienced by the free electrons in given by

From Newton’s second Law of motion, the force acquired by the electrons can be written as

Now, substituting the value of ‘a’ from the equation (2),we get 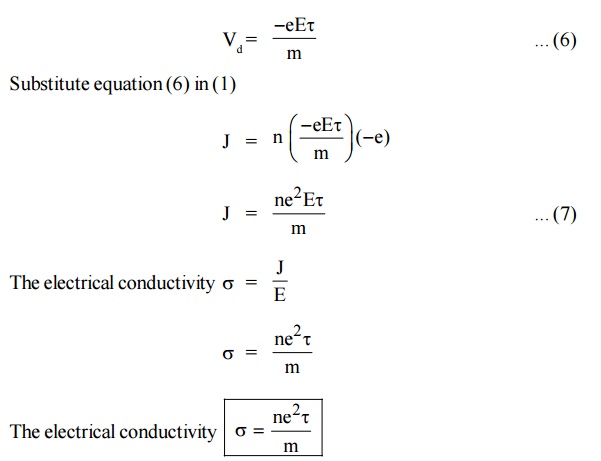 The electrical conductivity of a material is directly proportional to the free electron concentration in the material.

The thermal conductivity is defined as the amount of heat flowing through an unit area per unit temperature gradient.

Where K is the thermal conductivity of metal. Q is the amount of heat energy.

In general, the thermal conductivity of a material is due to the presence of lattice vibrations (ie., photons and electrons). Hence the total thermal conduction can be written as.

7.1  Expression for thermal conductivity (K) of an electron

Let ‘n’ be the number of conduction electrons and ‘v’ be the velocity of the electrons. KB is the Boltzmann constant

From kinetic theory of gases 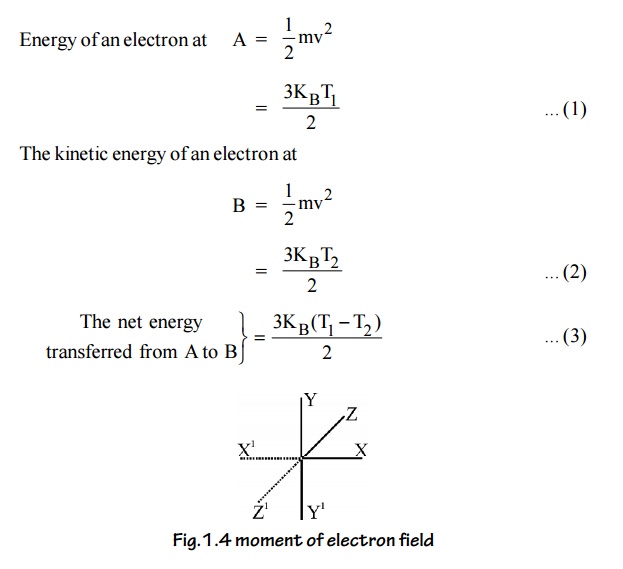 Let as assume that there is equal probability for the electrons to move in all the six directions. Each electrons travels with thermal velocity ‘V’ and ‘n’ is the free electron density then on average of 1/6 nv electron will travel in any one direction.

No. of electrons crossing per unit area in unit time at C 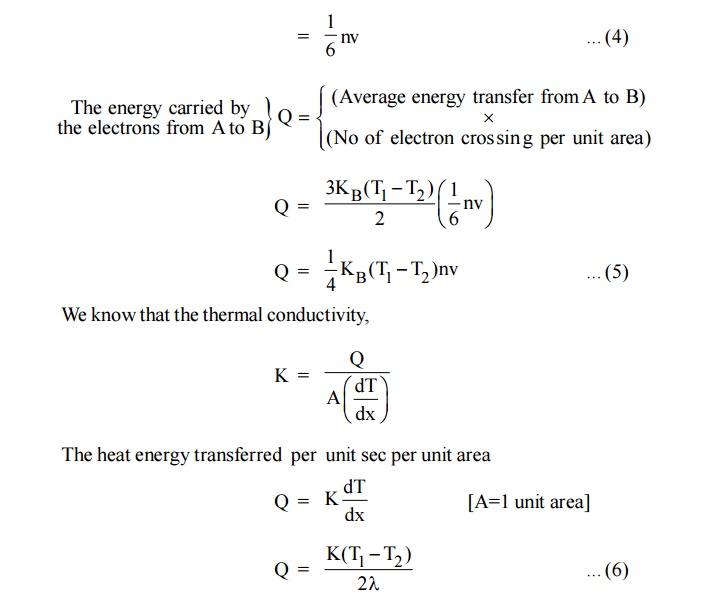 By Classical theory, we can drive Widemann-Franz law using the expressions for electrical and thermal conductivity of metals.

The expression for thermal conductivity 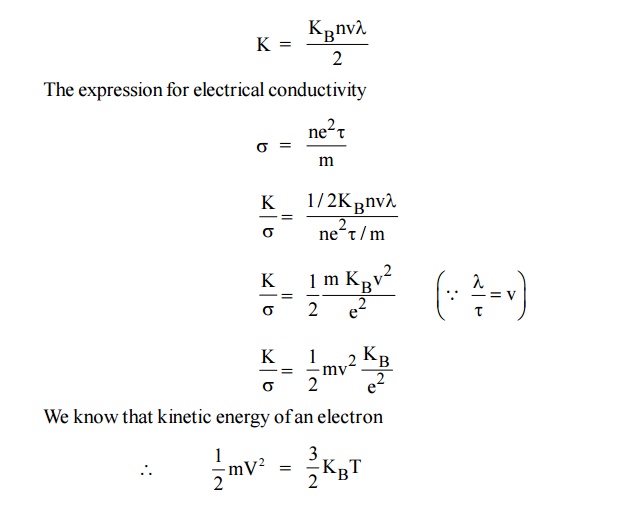 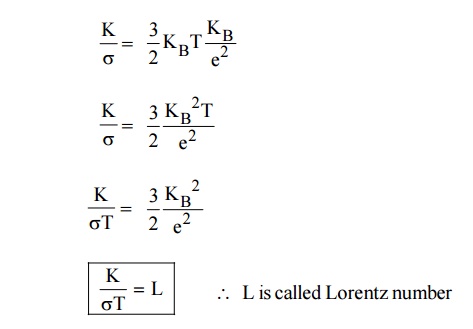 Thus, it is proved that the ratio of thermal conductivity and electrical conductivity of a metal is directly propotional to the absolute temperature of the metal. 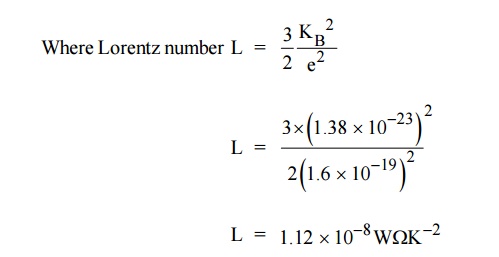 It is found that the classical value of Lorentz number is only one half of the experimental value (2.44 × 10–8 W K–2). The discrepancy of L value is the failure of the classical theory (Experimental and Theoretical). This can be rectified by quantum theory.

According to Quantum theory, the expression for thermal conductivity is modified by considering the electron specific heat as 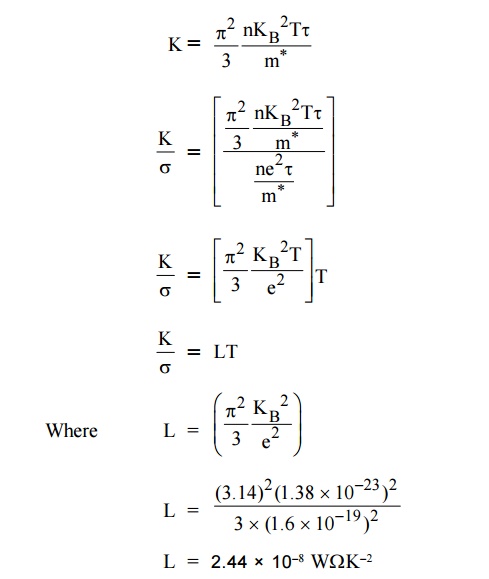 This is gives the correct value of Lorentz number and it in good agreement with the experiment value.

In a metal the available free electrons are fully responsible for electrical conduction.

The electrons move in a constant potential inside the metal. They cannot come out from the metal surface have very high potential barrier.

Electrons have wave nature, the velocity and energy distribution of the electron is given by Fermi-Dirac distribution function.

This theory explains the specific heat capacity of materials.

This theory gives the correct mathematical expression for the thermal conductivity of metals.

This theory fails to distinguish between metal, semiconductor and Insulator.

It also fails to explain the positive value of Hall Co-efficient.

According to this theory, only two electrons are present in the Fermi level and they are responsible for conduction which is not true.

It is an expression for the distribution of electrons among the energy levels as a function of temperature, the probability of finding an electron in a particular energy state of energy E is given by

10.1 Effect of Temperature on Fermi Function

It means that 100% probability for the electrons to occupy the energy level below the Fermi energy level.

It means that 0% probability (electron) for the electrons to occupy the energy level above the Fermi energy level.

Fermi level :  The Fermi level is the highest reference energy level of a particle at absolute zero.

Importance :  Fermi energy determines the energy of the particle at any temperature.

A parameter of interest in the study of conductivity of metals and semiconductors is the density of states. 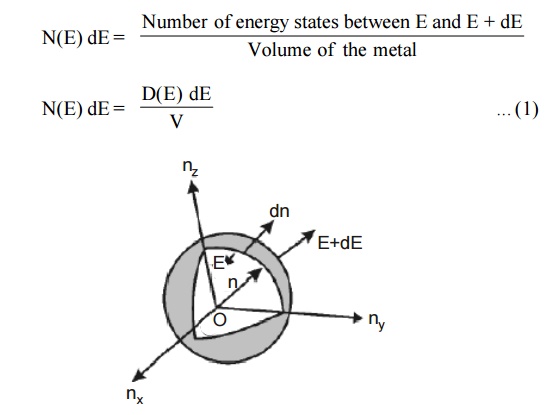 Let us constant a sphere of radius “n” in space with quantum numbers nn , ny and nz

The sphere is further divided into many shells represents a particular combination of quantum numbers and represents particular energy value.

Therefore, the number of energy states within a sphere of radius

Let us consider two energy values E and E + dE can be found by finding the number of energy states between the shells of radius n and n+ dn from the origin. Since the quantum numbers are positive integers, n values can be defined only in the positive octant of the n – space.

The number of available energy states within the sphere of radius “n” due to one octant.

Similarly the number of available energy states within the sphere of radius n+dn corresponding energy.

The number of available energy states between the energy interval dE

Since the higher powers of dn is very small, dn2 and dn3 terms can be neglected.

We know that the allowed energy values is

Differentiating equation (4) with respect to ‘n’ 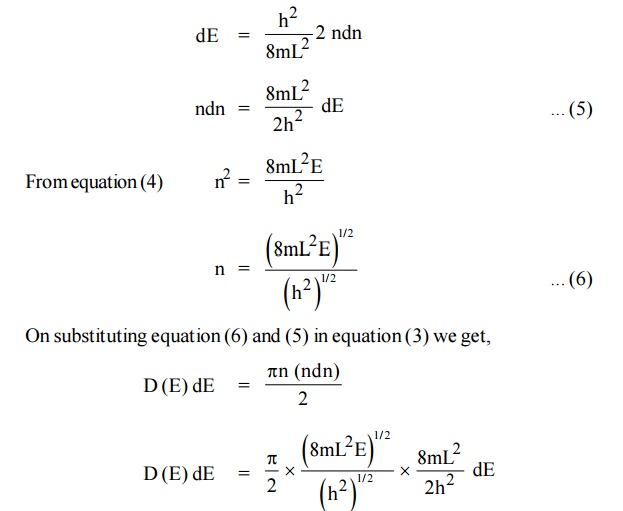 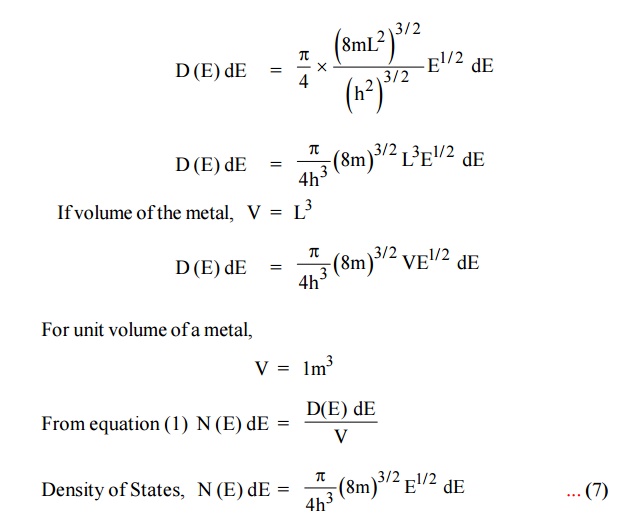 Each electron energy level can accommodate two electrons as per Pauli’s exclusion principle. (Spin up and Spin down = 2 (e) × density of states).

Let N(E) dE represents the number of filled energy states between the interval of energy dE, normally all the energy states will not be filled

Normally all the states are not filled states, filling of electrons is a given energy state is given by Fermi-function F(E). Let dn represents the number of filled energy states.

In this case of material of absolute zero the upper occupied level is EF and for all the levels below EF, F(E)=1 (at T = 0 K the maximum energy level that can be occupied by the electron is called Fermi energy level EF T = 0 K F(E) = 1). 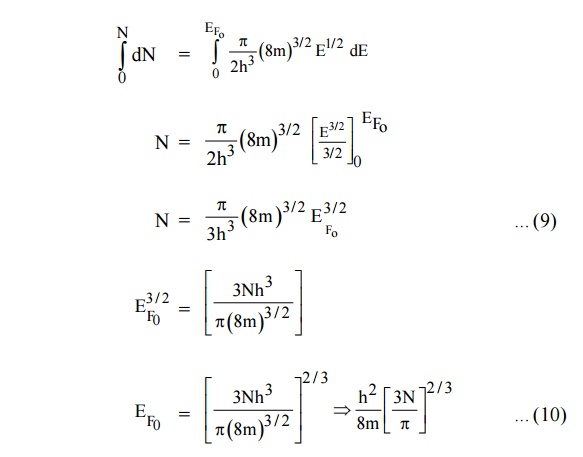 Hence the Fermi energy of a metal depends only on the density of electrons of that metal. 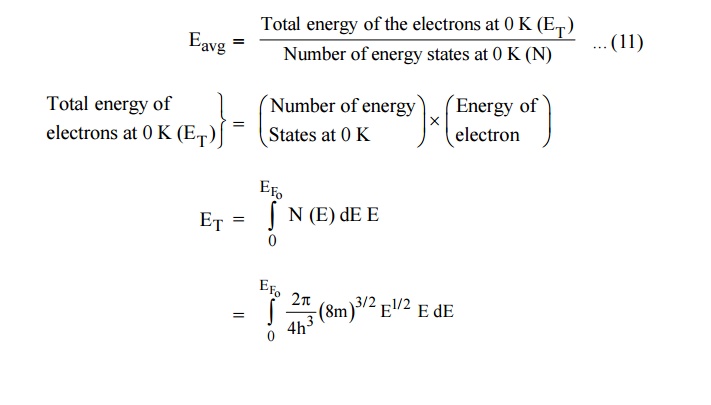 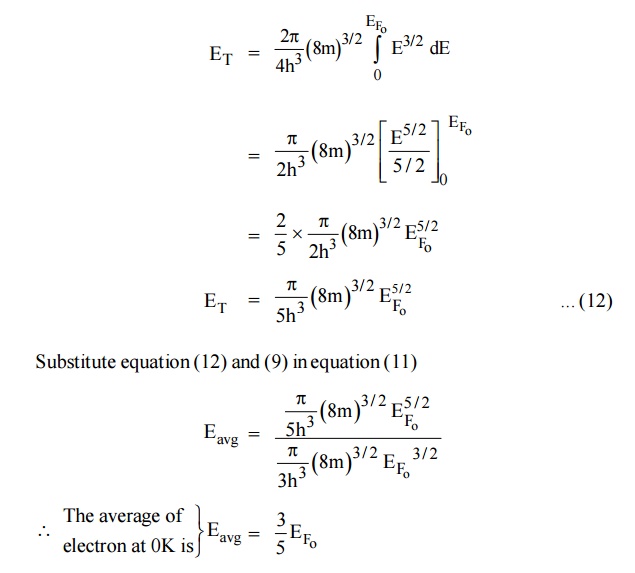 It is defined as the minimum energy required to remove an electron from the metal surface at absolute zero (0 K) is called as work function.

Let EF be the maximum energy of an electron called Fermi energy and EB be the energy of the metal barrier surface.

If we supply energy EB greater than EF, then no of electron escapes from the metal.

This difference in energy EW = EB – EF is called Work function of a metal.

This Concept is shown in energy diagram.

Work functions for Some Metals