1. The value of universal gas constant

d) none of the above

3. If a substance is heated or cooled, the linear expansion occurs along the axis of

a) difference in K.E and P.E

c) difference in T.E and P.E

d) difference in K.E and T.E

5. In the Given diagram, the possible direction of heat energy transformation is

II. Fill in the blanks:

2. The temperature and heat are Scalar quantities

3. One calorie is the amount of heat energy required to raise the temperature of 1 gm of water through 1°C.

4. According to Boyle’s law, the shape of the graph between pressure and reciprocal of volume is straight line

III. State whether the following statements are true or false, if false explain why?

1. For a given heat in liquid, the apparent expansion is more than that of real expansion. - False

The real expansion is more (or) less than that of apparent expansion.

3. According to Charles’s law, at constant pressure, the temperature is inversely proportional to volume. - False

Volume is directly proportional to temperature at constant pressure.

1. Linear expansion - (a) change in volume

c. Assertion is true but the reason is false.

d. Assertion is false but the reason is true.

1. Assertion: There is no effects on other end when one end of the rod is only heated.

2. Assertion: Gas is highly compressible than solid and liquid

Reason: Interatomic or intermolecular distance in the gas is comparably high.

Answer: c. Assertion is true but the reason is false.

One calorie is the amount of heat required to rise the temperature of 1 gram of water through 1°C.

3. What is co-efficient of cubical expansion?

The ratio of increase in volume of the body per degree rise in temperature to its unit volume is called as co-efficient of cubical expansion. It's unit is K-1.

When the temperature is kept constant, the volume of a fixed mass of gas is inversely proportional to its pressure. P ∝ 1/V

According to this law, when the pressure of gas is kept constant, the volume of a gas is directly proportional to the temperature of the gas.

1. If the atoms or molecules of a gas do not interact with each other, then the gas is said to be an ideal gas or a perfect gas.

2. Ideal gas does not have volume.

1. If the molecules or atoms of a . gas interact with each other with a definite amount of intermolecular or inter atomic force of attraction, then the gas is said to be a real gas.

7. What is co-efficient of real expansion?

The ratio of true rise in the volume of the liquid to unit original volume when the temperature rises by one kelvin is called as “Coefficient of real expansion”. Its SI unit is per K or K-1.

8. What is co-efficient of apparant expansion?

1. Find the final temperature of a copper rod. Whose area of cross section changes from 10 m2 to 11 m2 due to heating. The copper rod is initially kept at 90 K. (Coefficient of superficial expansion is 0.0021 /K)

2. Calculate the coefficient of cubical expansion of a zinc bar. Whose volume is increased 0.25 m3 from 0.3 m3 due to the change in its temperature of 50 K.

To find : Coefficient of cubic expansion = ?

(i) The ideal gas equation is an equation which relates all the properties of an ideal gas such as pressure (P), volume (V), temperature (T) and the amount of the gas.

(iii) According to Boyle’s law,

(iv) According to Charles’s law,

(v) According to Avogadro’s law,

The above relation is called the combined gas law.

(vii) If we consider a gas which contains μ moles of the gas, the number of atoms contained will be equal to μ times the Avogadro number, NA. i.e., n = μNA.

(viii) Using this value, equation (4) can be written as PV/ μNAT = constant

(ix) The value of constant in the above equation is taken to be kB, which is called as Boltzmann’s constant.

(x) Hence, we have the following equation:

(xi) Here, μNA kB = R, which is termed as universal gas constant whose value is 8.31

This is called ideal gas equation.

2. Explain the experiment of measuring the real and apparent expansion of a liquid with a neat diagram.

(i) The liquid whose real and apparent expansion is to be determined is poured in a container up to a level. Mark this level as L1.

(iii) As a result, the volume of the liquid appears to have reduced. Mark this reduced level of liquid as L2.

(iv) On further heating, the thermal energy is supplied to the liquid resulting in the expansion of the liquid. Hence, the level of liquid rises to L3.

(vi) The real expansion is always more than the apparent expansion. 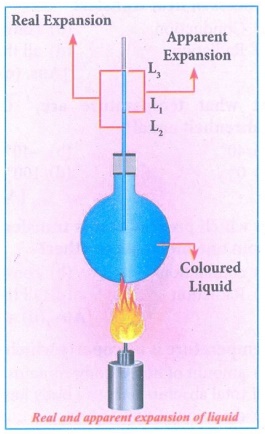 If you keep ice at 0° C and water at 0°C in either of your hands, in which hand you will feel more chillness? Why?

We will feel more chillness in the hand ice is placed at 0° C latent heat absorbed by the ice is greater than that absorbed by water.

Reason : The latent heat of vaporization absorbed by the ice is greater than water, at the same temperature. 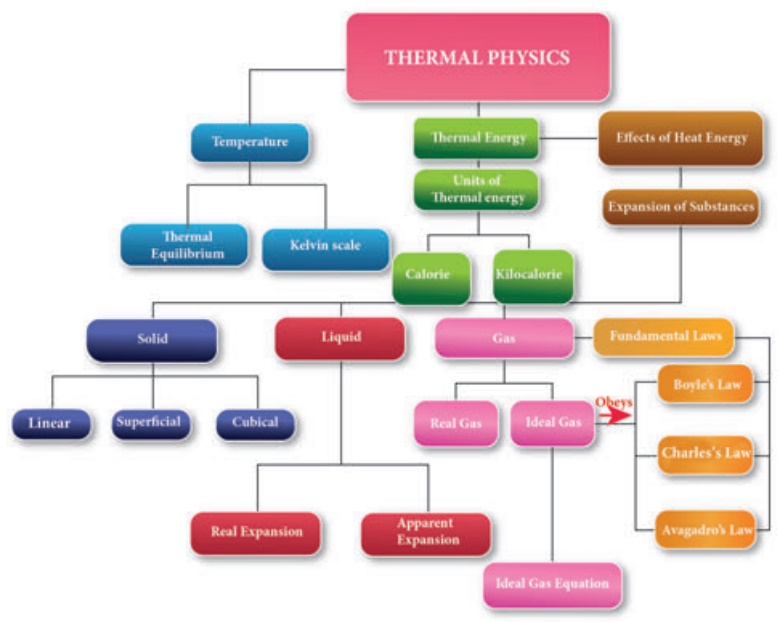