2.what is general plane motion.

Any plane motion which is neither a rotation nor a translation but considered as the sum of translation and rotation.

3.Define the term co-efficient of restitution.

The co-efficient of restitution between two bodies in a collision is defined as the ratio of the relative velocity of their separation after collision to the relative of their approach before collision.

Angle of friction is the angle between resultant reaction of one body on another and normal to the common tangent between two bodies when the motion is impending.

5.what are motion curves.

The path described by a particle or a rigid body with respect to time is called motion curve.

6.what do you understand by kinematics

Kinematics refers to the study of bodies in motion without considering the force that causes motion.

Dynamics is the branch of mechanics.which deals with the analysis of particles bodies in motion.

2.Write down the equations of motion of a particle under gravitation

3.A car accelerates uniformly from a sped of 30 Km/Hr to a speed of 75 Km/Hr in 5 secs. Determine the acceleration of the car and the distance traveled by the car during 5 secs. 4.Explain dynamic equilibrium

5.State the law of conservation of momentum

6.A car starts from rest with a constant acceleration of 4m/sec2. Determine the distance traveled in the 7th second.

7.A point P moves along a straight line according to the equation x= 4t3+2t+5, where x is in meters and t is in secs. Determine the velocity and acceleration at t=3 secs.

8.A stone is projected in space at an angle of 45° to horizontal at an initial velocity of 10 m/sec. Find the range of the projectile.

9.What is work energy principle

1. A train is traveling from A to D along the track shown in fig. Its initial velocity at A is zero. The train takes 5 min to cover the distance AB, 2250 m length and 2.5 minutes to cover, the distance BC, 3000 m in length, on reaching the station C, the brakes are applied and the train stops 2250 m beyond, at D (i) Find the retardation on CD, (ii) the time it takes the train to get from A to D, and (iii) its average speed for the whole distance.

3. A particle is projected with a initial velocity of 12m/s at an angle M with the horizontal. After sometime, the position of the particle is observed by its x and y distances of 6m and 4m respectively from the point of projection. Find the angle of projection. 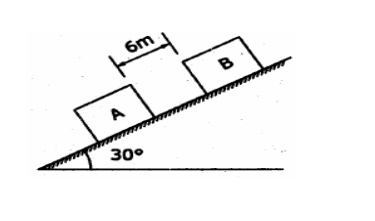 5. Two blocks of weight 150 N and 50 N are connected by a string and passing over a frictionless pulley as shown in figure. Determine the acceleration of blocks A and B and the tension in the string. 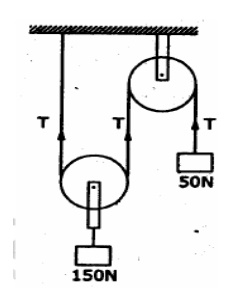 6. Two weights 80 N and 20 N are connected by a thread and move along a rought horizontal plane under the action of a force 40 N, applied to the first weight of 80 N as shown in figure. The coefficient of friction between the sliding surfaces of the wrights and the plane is 0.3.

Determine the acceleration of the weights and the tension in the thread using work-energy equation.

7. Two blocks of weight 150N and 50N are connected by a string, passing over a frictionless pulley as shown in fig. Determine the velocity of 150N block after 4 seconds. Also calculate the tension in the string. 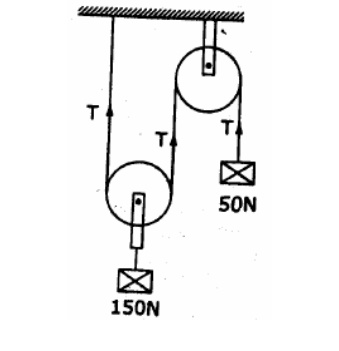 8. Two bodies, one of mass 30kg, moves with a velocity of 9m/s centrally. Find the velocity of each body after impact, if the coefficient of restitution is 0.8.