The other end of the string is connected to the spring balance. Apply an external force on the balance. Gradually increase the magnitude of the external force. Initially the body will not move and the effect of the applied force is nullified. This is because there acts a force on the block which opposes the motion or movement of the block. The nature of this opposing force is called friction. It depends upon many factors. The major cause of friction is the microscopic roughness of the contact surfaces. No surface is perfectly smooth. Every surface is composed of crests and falls as shown in fig b. It is the interlockingof the crests of one surface into the falls of the other surface which produces the resistance against the movement of one body over the other body. When the force exerted is sufficient to overcome the friction, the movement ensures and the crests are being sheared off. This gives rise to heat and raises the local temperature. This is also the reason of the wear of the contact surfaces. This phenomenon of friction necessitates the presence o fluid film between the two surfaces to avoid wear of surfaces. The process of creating the fluid film is called lubrication

Friction is of the following two types.

The dynamic friction has two types

The maximum friction (before the movement of body) which can be produced by the surfaces in contact is known as limiting friction .It is experimentally found that friction directly varies as the applied force until the movement produces in the body. 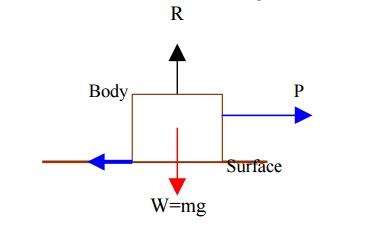 A little concentration will show that the body A presses the surface B downward equal to weight of the body and in reaction surface B lift the body in upward direction of the same magnitude but in opposite direction therefore the body in equilibrium this upward reaction is termed as normal reaction and it is denoted by R or N.

These laws are listed below:

The force of friction always acts in a direction opposite to that in which the body tends to move.

·        The magnitude of force of static friction is just sufficient to prevent a body from moving and it is equal to the applied force.

·        The force of static friction does not depend upon, shape, area, volume, size etc. as long as normal reaction remains the same.

·        When a body is moving with certain velocity, it is opposed by a force called force of dynamic friction.

·        The force of dynamic friction comes into play during the motion of the body and as soon as the body stops, the force of friction disappears.

·        The force of dynamic friction is independent of area, volume, shape, size etc. of the body so long the normal reaction remains the same. However, to some extent it varies with the magnitude of

·        velocity of the body. Force of dynamic friction is high for low speeds and low for very high speeds.

Example 1: A horse exerts a pull of 3 KN just to move a carriage having a mass of 800 kg. Determine the co efficient of friction between the wheel and the ground. Take g = 10 m/sec²

Solution we know that W = mg 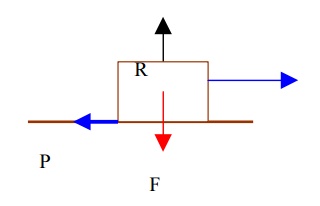 put the values in working formula we get

Example 2: A pull of 490 N inclined at 30º to the horizontal is necessary to move a block of wood on a horizontal table. If the coefficient of friction between to bodies in contact is 0.2 what is the mass of the block.

Now consider the following diagram and also resolve the force P into horizontal and vertical components. 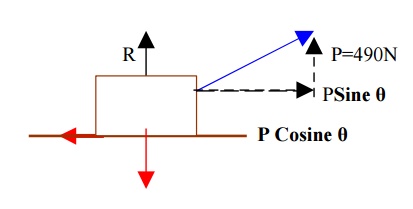 Now consider the forces acting in y axis is positive

Example 3: A body of mass 100 Kg rests on horizontal plane the co efficient of friction between body and the plane 0.40. Find the work done in moving the body through a distance of 20 m along the plane.