Chapter: Java The Complete Reference : The Java Language : I/O, Applets, and Other Topics

In fact, aside from print( ) and println( ), none of the I/O methods have been used significantly.

As you may have noticed while reading the preceding 12 chapters, not much use has been made of I/O in the example programs. In fact, aside from print( ) and println( ), none of the I/O methods have been used significantly. The reason is simple: most real applications of Java are not text-based, console programs. Rather, they are either graphically oriented programs that rely on one of Java’s graphical user interface (GUI) frameworks, such as Swing, the AWT, or JavaFX, for user interaction, or they are Web applications. Although text-based, console programs are excellent as teaching examples, they do not constitute an important use for Java in the real world. Also, Java’s support for console I/O is limited and somewhat awkward to use—even in simple example programs. Text-based console I/O is just not that useful in real-world Java programming.

The preceding paragraph notwithstanding, Java does provide strong, flexible support for I/O as it relates to files and networks. Java’s I/O system is cohesive and consistent. In fact, once you understand its fundamentals, the rest of the I/O system is easy to master. A general overview of I/O is presented here. A detailed description is found in Chapters 20 and 21.

Java programs perform I/O through streams. A stream is an abstraction that either produces or consumes information. A stream is linked to a physical device by the Java I/O system. All streams behave in the same manner, even if the actual physical devices to which they are linked differ. Thus, the same I/O classes and methods can be applied to different types of devices. This means that an input stream can abstract many different kinds of input: from a disk file, a keyboard, or a network socket. Likewise, an output stream may refer to the console, a disk file, or a network connection. Streams are a clean way to deal with input/ output without having every part of your code understand the difference between a keyboard and a network, for example. Java implements streams within class hierarchies defined in the java.io package.

One other point: at the lowest level, all I/O is still byte-oriented. The character-based streams simply provide a convenient and efficient means for handling characters.

Byte streams are defined by using two class hierarchies. At the top are two abstract classes: InputStream and OutputStream. Each of these abstract classes has several concrete subclasses that handle the differences among various devices, such as disk files, network connections, and even memory buffers. The byte stream classes in java.io are shown in Table 13-1. A few of these classes are discussed later in this section. Others are described in Part II of this book. Remember, to use the stream classes, you must import java.io. 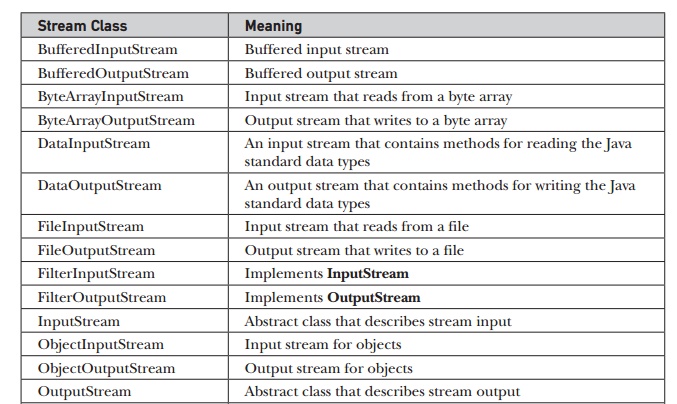 The abstract classes InputStream and OutputStream define several key methods that the other stream classes implement. Two of the most important are read( ) and write( ), which, respectively, read and write bytes of data. Each has a form that is abstract and must be overridden by derived stream classes. 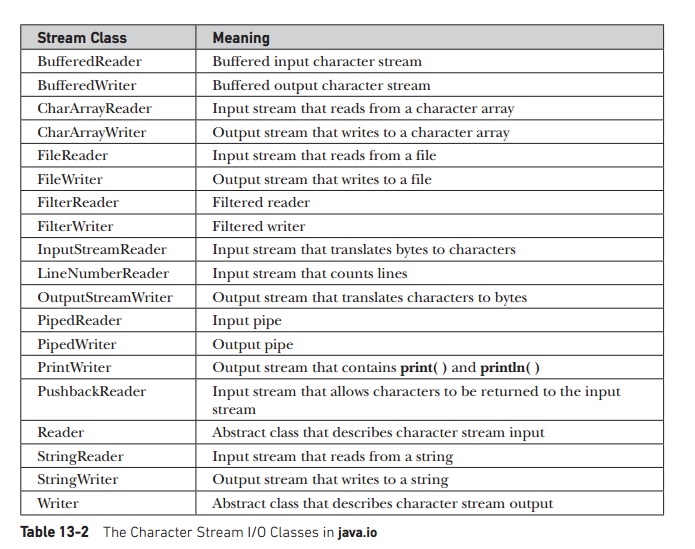 The abstract classes Reader and Writer define several key methods that the other stream classes implement. Two of the most important methods are read( ) and write( ), which read and write characters of data, respectively. Each has a form that is abstract and must be overridden by derived stream classes.

As you know, all Java programs automatically import the java.lang package. This package defines a class called System, which encapsulates several aspects of the run-time environment. For example, using some of its methods, you can obtain the current time and the settings of various properties associated with the system. System also contains three predefined stream variables: in, out, and err. These fields are declared as public, static, and final within System. This means that they can be used by any other part of your program and without reference to a specific System object.

System.in is an object of type InputStream; System.out and System.err are objects of type PrintStream. These are byte streams, even though they are typically used to read and write characters from and to the console. As you will see, you can wrap these within character-based streams, if desired.

The preceding chapters have been using System.out in their examples. You can use System.err in much the same way. As explained in the next section, use of System.in is a little more complicated.