Chapter: Essentials of Psychiatry: Therapeutic Management of the Suicidal Patient

Dynamic theories facilitate the attempt to understand patients and their difficulties.

Dynamic theories facilitate the attempt to understand patients and their difficulties. Gabbard (2000) presents an overview to these ap-proaches to understanding the suicidal patient. As he discusses, Freud postulated that suicide could be the result of displaced murderous impulses toward an internalized object, and later in the structural model, the aggression of a sadistic superego against the ego. Men-ninger believed that suicide was a function of wishes to kill (e.g. an angry act designed to devastate survivors), be killed, and to die. A familiar theme in object relations of the suicidal patient is the conflict between the internalized tormentor and the anguished victim. Pa-tients may either identify with the internalized aggressor and lash out at others or submit to the tormentor through suicide. Fenichel noted the less aggressive reunion fantasy, in which death abates object loss by the imagined joining with a departed loved one, frequently a maternal superego figure. When identity and self-esteem are tied to a lost object, suicide can be viewed as restorative. Pathological grief and anniversaries of losses may be vulnerable times for such patients (Gabbard, 2000).

Cognitive rigidity, especially the inability to revise expec-tations of the self, can lead to hopelessness and suicidality. Sui-cidal ideation that is egosyntonic is especially concerning. Four patterns of ego functioning and object relations that differentiate between serious attempters and manipulative gestures are: “(1) an inability to give up infantile wishes for nurturance, associated with a conflict about being overly dependent; (2) a sober but ambivalent view toward death; (3) excessively high self-expectations; and (4) overcontrol of affect, particularly aggression” (Gabbard, 2000).

In contrast to those who are intent on dying, most patients are ambivalent about death, and can come to choose life. Psy-chotherapy can be an important avenue to understanding why a patient wants to die and what they expect in the aftermath. Gab-bard sees this effort as treatment, while providing safety may only be management (Gabbard, 2000).

There are genetic and biologic correlates of suicidality as well as the underlying psychiatric illnesses that are often associated with suicidal behavior. For example, Ahearn and colleagues (2001) compared MRI studies in 20 pairs of unipolar depressed patients with and without suicide attempts. Subjects were matched on car-diovascular history, ECT treatment and psychosis. There were no statistical differences in age of onset of illness, number of epi-sodes, or depression ratings. It was found that the patients with suicide attempts had more subcortical gray matter intensities. There was a trend toward more periventricular white matter hy-perintensities in the patients with suicide attempts. The authors concluded that patients with abnormal MRI, especially gray mat-ter hyperintensities in the basal ganglia, may be at higher risk for mood disorders and suicide attempts secondary to interference in neuroanatomic pathways. These pathways may be crucial to mood regulation (Ahearn et al., 2001). These and other neuro-biologic correlates may improve our ability to predict suicide and suicidal behavior. Promising mechanisms include the serotonin system, although adrenergic and dopaminergic systems have also been implicated. Abnormalities in the hypothalamic–pitui-tary–adrenal (HPA) axis have long been associated with mood disorders.

For example, dysregulation in the serotonin system has been linked to major depression, suicide and violence (see Table 85.1). Disparate findings are a function of the inherent difficulties with association studies. A number of these studies have found an association between reduced serotonin function, including low levels of the serotonin metabolite 5-hydroxyindoleacetic acid (5-HIAA) in cerebrospinal fluid (CSF), with impulsivity, violence and suicide (Mann, 1998; Placidi et al., 2001). Low CSF 5-HIAA levels may also predict future suicide attempts (Roy et al., 1989). Aggressive behavior and, independently, suicidal behavior, may have impulsivity as a common denominator, which may be medi-ated by serotonergic dysfunction (Placidi et al., 2001).

Small sample sizes, heterogeneous diagnostic groups, retrospective analyses, uncertain impact of psychotropic agents, the continuum of suicidal behaviors (manipulative gestures to self-mutilation without the intent to die to completed suicide), and the “cross talk” between many of the neurobiologic systems targeted for study can all undermine consistency of findings. 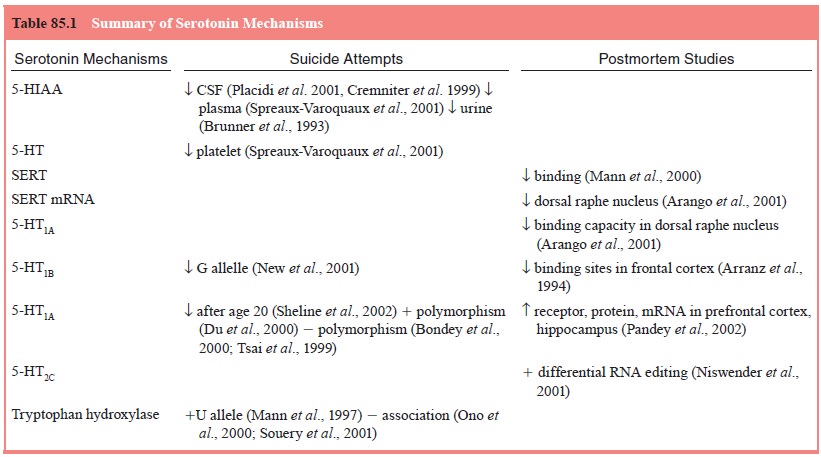