Chapter: Essentials of Psychiatry: Therapeutic Management of the Suicidal Patient

Common presentations include acute, chronic, contingent, and/or potentially manipulative suicidal patient. All are associated with anxiety for the care provider doing the assessment. Careful as-sessment, use of collateral information and acceptance of predic-tive limitations can be helpful (see Table 85.3).

As reviewed by Nicholas and Golden (2001), factors to be considered in the assessment of the acutely suicidal patient include the current mental status, with special attention to direct inquiry about suicidal ideation, intent (may be ascertained from family and friends, for example, saying good-byes or putting af-fairs in order), and plans (well thought out with available means). Sadness, hopelessness, social withdrawal/isolation, anxiety, agitation, impulsivity, insomnia, psychosis (especially command hallucinations or distressing persecutory delusions) are addi-tional concerning symptoms. These factors, coupled with prior high lethality attempts, uncommunicative presentation, recent major loss, active substance abuse, or untreated mood, psychotic, or personality disorder, might indicate that hospitalization is warranted to ensure safety prior to treating the underlying psy-chiatric disorder (Nicholas and Golden, 2001).

Sachs and colleagues (2001) reviewed suicide prevention strategies for bipolar outpatients, but they can easily be adapted to any potentially suicidal patient. The reader is reminded that “care providers can, however, be fooled by the deceptions of a 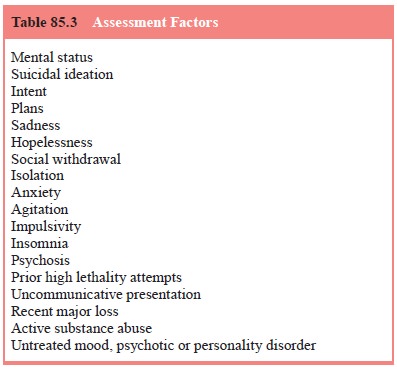 clever patient intent on carrying out a lethal act”. Individual-ized treatment plans should be developed after eliciting current symptoms, including suicidal ideation; review of risk factors, stressors, comorbid states like substance use; and past history of suicide attempts. Acute efforts are directed toward safety and treating the underlying disorder, with follow-up monitoring. Ad-junctive medications like antipsychotics and anxiolytics can be beneficial. Clinicians must monitor the amounts of medications prescribed and continue to be vigilant during early recovery. Harm reduction strategies can include minimizing access to le-thal means, decreasing social isolation, close follow-up and in-forming of emergency contact procedures. Hospitalization may be warranted if suicide is considered as a solution for problems, for active suicidal ideation, or if there has been a recent attempt. With the caveat that while admission may provide safety, current knowledge of risk factors do not wholly inform when to admit or discharge, overreliance on hospitalization may deter honest reporting, and many acutely depressed patients can be managed as outpatients with sufficient safeguards. Involuntary admission, while not therapy in and of itself, may be lifesaving. ECT remains a safe, typically quick onset, effective option for those at high risk of suicide (Sachs et al., 2001).

There is no evidence that denial of suicidal intent predicts nonsuicide. Review of standard risk factors, additional risk factors (e.g. acute relationship and employment changes), acute versus chronic suicidal ideation, and treatment of readily reversible factors should be undertaken. High risk diagnoses include major depression, bipolar disorder, schizophrenia, alcoholism and substance abuse, and borderline personality disorder. Comorbid alcoholism increases the risk in every diagnostic category. A history of past attempts, hopelessness, previous hospitalizations and recent discharge, while not individually predictive, do heighten concern. Acute risk factors include severe anxiety, panic attacks, global insomnia and agitation. These symptoms should be carefully assessed, with aggressive intervention. Benzodiazepines and antipsychotics can be employed to address anxiety and agitation. Caution must be taken with benzodiazepines to avoid disinhibition and combination with alcohol. Mixed states may require mood stabilizers. Serial assessments should be performed with acute changes as well as chronic suicidal states.

A significant number of psychiatrists utilize the no-suicide contract, or the contract for safety. Over half of a sample of psy-chiatrists acknowledged using them in recent survey, and 41% of them had patients make suicide attempts after entering into one (Kroll, 2000). Sixty-four percent of 14 psychiatric hospital inpa-tient suicides denied suicidal ideation and half had some form of no-suicide agreement in place in the week before their deaths (Busch et al., 1993). These have not been systematically stud-ied as to whether they have any protective effect (Gray and Otto, 2001). Resnick (2002) cautions that psychiatrists tend to view the patient as a collaborator in treatment. However, the psychia-trist can be less viewed as an “ally” and become an “adversary” when the patient has determined to die by suicide. He notes that failure to recognize this shift in the doctor–patient relationship can have devastating results. Objective evidence, as opposed to patient subjective reports, may be telling. Alliances with family and other caregivers should be maintained, as they can become crucial sources of information. Resnick believes that no-suicide contracts have little credence, especially in an adversarial rela-tionship, cause a false sense of security for the therapist, and have no research literature to suggest efficacy (Resnick, 2002).

Gutheil and Schetky (1998) wrote of a most difficult as-sessment: the patient who expresses suicidal ideation in terms of a future eventuality. The “if [event or outcome does or does not happen], I will kill myself” contingency poses different chal-lenges from acute suicidality, manipulative suicidal threats and chronic suicidality. Suicidality typically engenders anxiety in the therapist. Contingency suicidality frequently lacks verbal-ized imminence, may make involuntary commitment difficult, and invites countertransferences which can lead to exaggerated or inappropriately muted responses. For some patients, the con-tingency is a defense against suicide. For others, it represents the ultimate control. Gutheil and Schetky (1998) make several im-portant points: 1) Some patients almost have an object relation-ship with death, with death personified as a benevolent bringer of relief. The therapist should approach that tie with caution, as it may be the only one in which the patient has any confidence; 2) Future deadlines should not be accepted literally; 3) Even when the contingency is met positively, the suicidal ideation may not re-solve; 4) Some patients view themselves as already dead, cannot conceive of life without depression, and challenge the therapist to resurrect them. This stance undermines any potential relation-ship; and 5) It is of benefit to negotiate a halt to suicidal acts until depression can be separated from decision-making. Gutheil and Schetky assert “… psychiatrists should never support suicide, but should acknowledge the human impossibility of preventing it”. The authors note that in these circumstances, the patient is at least communicating their suicidal ideation. The rationale can be explored and an effort made to maintain the therapeutic relation-ship. Helplessness should be discussed, as suicidal ideation can be a defense against lack of control or an expression of pain. The countertransference of the therapist should be considered, as it can cloud clinical judgment. Consultation with colleagues can be very helpful. The competency of the patient may be called into question, and has been used as a defense in suicide malprac-tice cases. The clinician can frequently be justified in involun-tary commitment as critical dates or junctures approach. Finally, Gutheil and Schetky state that “accepting the patient’s pain and sense of hopelessness is not the same as acceding to his or her wish to commit suicide; the psychiatrist must always hold out hope. At the same time, it may be therapeutic and realistic to let patients know that one can not ultimately prevent their suicides” (Gutheil and Schetky, 1998).