All living organisms develop from pre-existing organisms. The capacity to reproduce is one of the most important characteristics of living beings. is process is aimed to preserve individual species and is called ‘self perpetuation’.

All living organisms develop from pre-existing organisms. The capacity to reproduce is one of the most important characteristics of living beings. is process is aimed to preserve individual species and is called ‘self perpetuation’.

There is a distinct sexual dimorphism in human beings i.e., males are visibly different from females in physical build up, external genital organs and secondary sexual characters. Thus, the structures associated with reproduction are different in males and females. The reproductive systems of male and female consist of many organs which are distinguished as primary and secondary sex organs. The primary sex organs are gonads, which produce gametes (sex cells) and secrete sex hormones. The secondary sex organs include the genital ducts and glands which help in the transportation of gametes and enable the reproductive process. They do not produce gametes or sex hormones.

Testes: A pair of testes or testicles lies outside the abdominal cavity of the male. ese testes are the male gonads, which produces male gametes (sperms) and male sex hormone (Testosterone). Along the inner side of each testis lies a mass of coiled tubules called epididymis. The Sertoli cells of the testes provide nourishment to the developing sperms.

Scrotum: The scrotum is a loose pouch-like sac of skin which is divided internally into right and left scrotal sacs by muscular partition. The two testes lie in the respective scrotal sacs. It also contains many nerves and blood vessels. The scrotum acts as a thermoregulator organ and provides an optimum temperature for the formation of sperms. The sperms develop at a temperature of 1-3˚C lower than the normal body temperature. 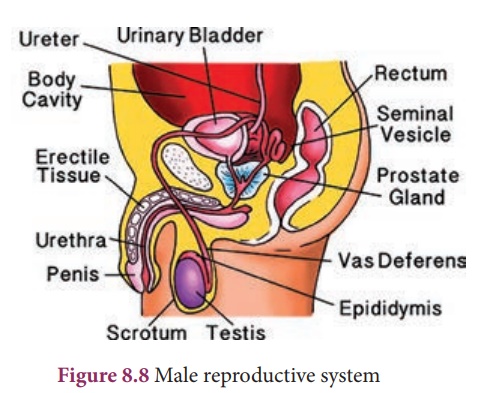 Urethra: It is contained inside the penis and conveys the sperms from the vas deferens which pass through the urethral opening.

The accessory glands associated with the male reproductive system consist of seminal vesicles, prostate gland and Cowper’s glands. The secretions of these glands form seminal fluid and mixes with the sperm to form semen. This fluid provides nutrition and helps in the transport of sperms.

The Leydig cells of the testes secrete the male sex hormone testosterone which controls spermatogenesis and plays a role in the development of male secondary sexual characters like growth of beard, moustache, body hair and hoarse voice.

Ovaries: A pair of almond-shaped ovaries is located in the lower part of abdominal cavity near the kidneys in female. he ovaries are the female gonads, which produce female gametes ( eggs or ova)and secrete female sex hormones (Oestrogen and Progesterone). A mature ovary contains a large number of ova in different stages of development. nly one ovum usually ripens every month. ne mature ovum is released from either side of the ovary at an interval of every days menstrual cycle . The process of release of ovum from the ovary is known as ovulation.

Fallopian tubes (Oviducts): These are paired tubes originating from uterus, one on either side. The terminal part of fallopian tube is funnel-shaped with finger-like projections called fimbriae lying near the ovary. The fimbriae pick up the ovum released from ovary and push it into the fallopian tube.

Uterus: Uterus is a pear-shaped muscular, hollow structure present in the pelvic cavity. It lies between urinary bladder and rectum. Development of foetus occurs inside the uterus. The narrower lower part of uterus is called cervix, which leads into vagina.

Vagina: The uterus narrows down into a hollow muscular tube called vagina. It connects cervix and the external genitalia. It receives the sperms, acts as birth canal during child birth (parturition) and also serves as passage for menstrual flow. 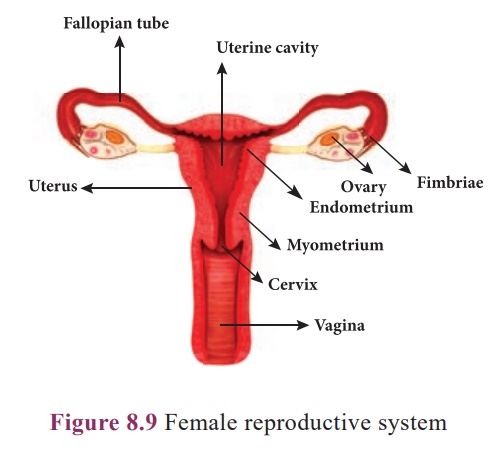 The female sex hormone oestrogen is secreted by the graafian follicle of the ovum. It controls the development of accessory sex organs and secondary sexual characters. It regulates menstrual cycle and fertility. Progesterone is secreted by the corpus luteum. It prepares the uterus for implantation of fertilized ovum, formation of placenta and for maintaining pregnancy.