Metabolic activities continuously take place in living cells. All metabolic products produced by the biochemical reactions are not utilized by the body because certain nitrogenous toxic waste substances are also produced. They are called excretory products.

Metabolic activities continuously take place in living cells. All metabolic products produced by the biochemical reactions are not utilized by the body because certain nitrogenous toxic waste substances are also produced. They are called excretory products. In human beings urea is the major excretory product. The tissues and organs associated with the removal of waste products constitute the excretory system.

The human excretory system consists of a pair of kidney, which produce the urine, a pair of ureters which conduct the urine from kidneys to the urinary bladder, where urine is stored temporarily and urethra through which the urine is voided by bladder contractions. 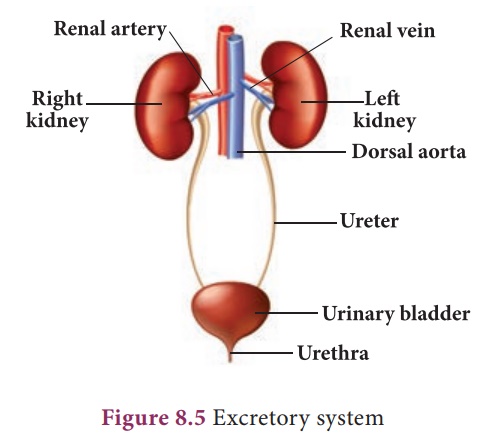 If the waste products are accumulated and not eliminated, they become harmful and poisonous to the body. Hence, excretion plays an important role in maintaining the homeostatic condition of the body.

Some of the excretory organs other than kidneys are skin (removes small amounts of water, urea and salts in the form of sweat) and lungs (eliminate carbon-dioxide and water vapour through exhaling).

Skin is the outer most covering of the body. It stretches all over the body in the form of a layer. It accounts for 15% of an adult’s human body weight. ere are many structures and glands derived from the skin. It eliminates metabolic wastes through perspiration.

The human body functions normally at a temperature of about 370C. When it gets hot sweat glands start secreting sweat, which contains water with small amounts of other chemicals like ammonia, urea, lactic acid and salts (mainly sodium chloride). The sweat passes through the pores in the skin and gets evaporated.

Kidneys are bean-shaped organs reddish brown in colour. The kidneys lie on either side of the vertebral column in the abdominal cavity attached to the dorsal body wall. The right kidney is placed lower than the le kidney as the liver takes up much space on the right side. Each kidney is about 11 cm long, 5 cm wide and 3 cm thick. The kidney is covered by a layer of brous connective tissue, the renal capsules, adipose capsule and a brous membrane. 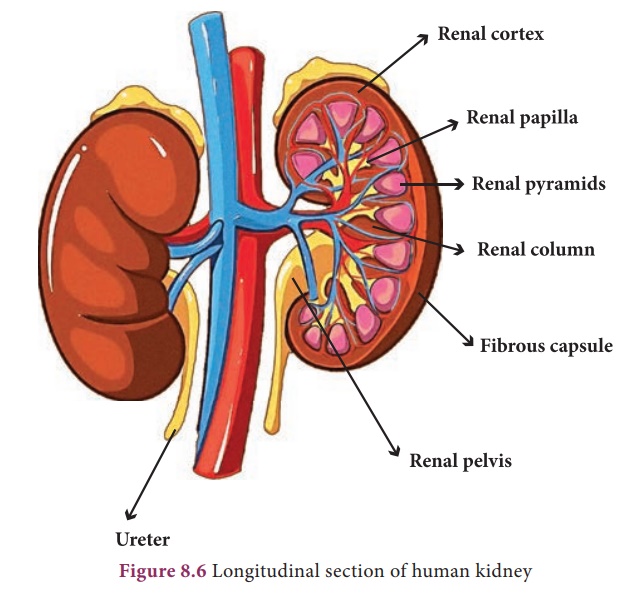 Internally the kidney consists of an outer dark region, the cortex and an inner lighter region, the medulla.

Both of these regions contain uriniferous tubules or nephrons.

The medulla consists of multitubular conical masses called the medullary pyramids or renal pyramids whose bases are adjacent to cortex. On the inner concave side of each kidney, a notch called hilum is present through which blood vessels and nerves enter in and the urine leaves out.

Ureters: Ureters are thin muscular tubes emerging out from the hilum. Urine enters the ureter from the renal pelvis and is conducted along the ureter by peristaltic movements of its walls. The ureters carry urine from kidney to urinary bladder.

Urinary bladder: Urinary bladder is a sac-like structure, which lies in the pelvic cavity of the abdomen. It stores urine temporarily.

Urethra: Urethra is a membranous tube, which conducts urine to the exterior. The urethral sphincters keep the urethra closed and opens only at the time of micturition (urination).

·           Help to retain the important plasma constituents like glucose and amino acids.

Each kidney consists of more than one million nephrons. Nephrons or uriniferous tubules are structural and functional units of the kidneys. Each nephron consists of Renal corpuscle or Malphigian corpuscle and renal tubule. The renal corpuscle consists of a cup-shaped structure called Bowman’s capsule containing a bunch of capillaries called glomerulus. Blood enters the glomerular capillaries through a erent arterioles and leaves out through e erent arterioles. The Bowman’s capsule continues as the renal tubule which consists of three regions proximal convoluted tubule, U-shaped hair pin loop, the loop of Henle and the distal convoluted tubule. The distal convoluted tubule which opens into the collecting tubule. The nitrogenous wastes are drained into renal pelvis which leads to ureters and stored in the urinary bladder. Urine is expelled out through the urethra.

The process of urine formation includes the following three stages.

Glomerular ltration: Urine formation begins with the ltration of blood through epithelial walls of the glomerulus and Bowman’s capsule. The ltrate is called as the glomerular ltrate. Both essential and non-essential substances present in the blood are ltered.

Tubular reabsorption: The filtrate in the proximal tubule consists of essential substances such as glucose, amino acids, vitamins, sodium, potassium, bicarbonates and water that are reabsorbed into the blood by a process of selective reabsorption.

Tubular secretion: Substances such as H+ or K+ ions are secreted into the tubule. Certain substances like potassium and a large number of drugs like penicillin and aspirin are passed into the ltrate in the distal convoluted tubule. is tubular ltrate is nally known as urine, which is hypertonic in man. Finally the urine passes into collecting ducts to the pelvis and through the ureter into the urinary bladder by urethral peristalsis (waves of constriction in the ureters). The relaxation of sphincter muscles located at the opening of the urinary bladder into the urethra. When the urinary bladder is full the urine is expelled out through the urethra. is process is called micturition. A healthy person excretes one to two litres of urine per day. 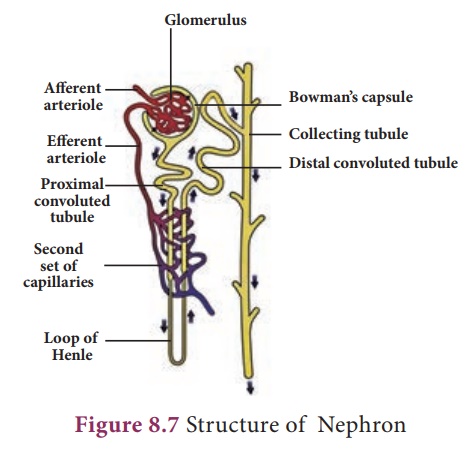 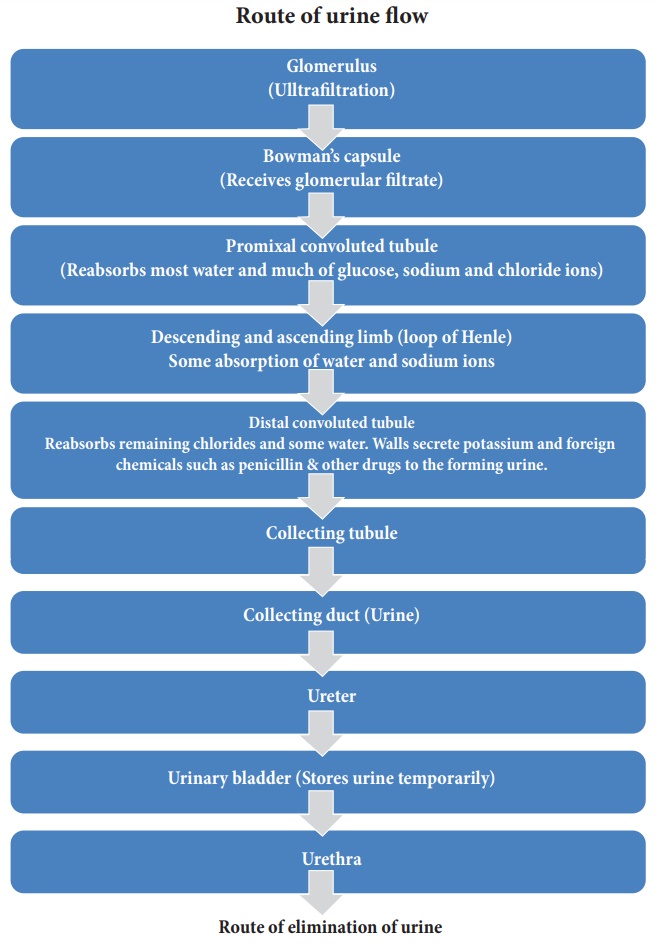 When kidneys lose their filtering efficiency, excessive amount of fluid and toxic waste accumulate in the body. This condition is known as kidney (renal) failure. For this, an artificial kidney is used to filter the blood of the patient. The patient is said to be put on dialysis and the process of purifying blood by an artificial kidney is called haemodialysis. When renal failure cannot be treated by drug or dialysis, the patients are advised for kidney transplantation.