The process of nutrition begins with intake of food, called ingestion. The breakdown of large complex insoluble food molecules into small, simpler soluble and di usible particles by the action of digestive enzymes is called digestion.

The process of nutrition begins with intake of food, called ingestion. The breakdown of large complex insoluble food molecules into small, simpler soluble and di usible particles by the action of digestive enzymes is called digestion. Parts of the body concerned with the digestion of food form the digestive system. 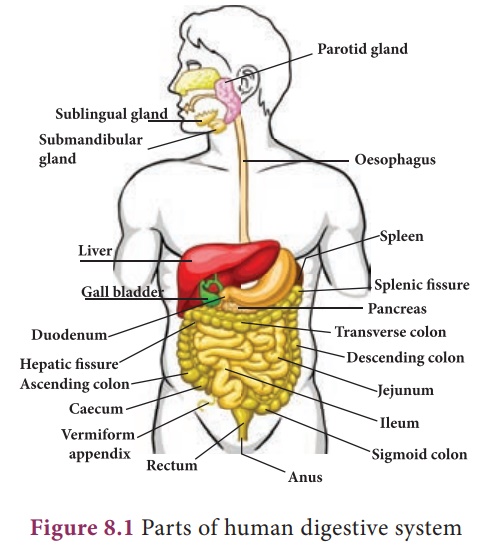 The digestive system consists of two sets of organs. They are as follows;

Alimentary canal (digestive tract/gastro-intestinal tract) It is the passage of food starting from the mouth and ends with the anus.

The glands associated with the digestive system are the salivary glands, gastric glands, pancreas, liver and intestinal glands.

2. Structure of the Alimentary Canal

Mouth: The mouth leads into the buccal cavity. It is bound by two soft, movable upper and lower lips. The buccal cavity is a large space bound above by the palate (which separates the wind pipe and food tube), below by the throat and on the sides by the jaws. The jaws bear teeth.

Teeth: Teeth are hard structures meant for holding, cutting, grinding and crushing the food. In human beings two sets of teeth (Diphyodont) are developed in their life time. The first appearing set of 20 teeth called temporary or milk teeth are replaced by the second set of thirty two permanent teeth, sixteen in each jaw. Each tooth has a root fitted in the gum (Theocodont). Permanent teeth are of four types (Heterodont), according to their structure and function namely incisors, canines, premolars and molars. 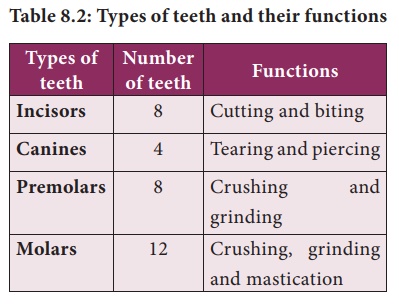 Dental formula represents the number of different type of teeth present in each half of a jaw (upper and lower jaw). The types of teeth are denoted as incisors (i), canine (c), premolars (pm) and molars (m). The dental formula is presented as:

For Milk teeth in each half of upper and lower jaw:

For Permanent teeth in each half of upper and lower jaw: 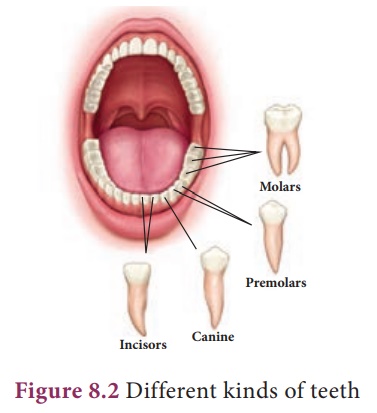 Salivary glands: Three pairs of salivary glands are present in the mouth cavity. They are: parotid glands, sublingual glands and submaxillary or submandibular glands

i. Parotid glands are the largest salivary glands, which lie in the cheeks in front of the ears (in Greek Par - near ; otid - ear).

ii. Sublingual glands are the smallest glands and lie beneath the tongue.

iii. Submaxillary or Submandibular glands lie at the angles of the lower jaw. 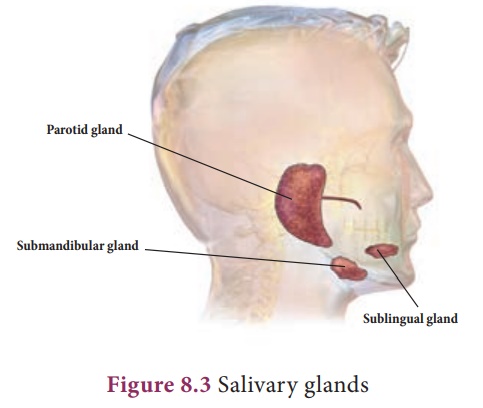 The salivary glands secrete a viscous fluid called saliva, approximately 1.5 liters per day. It digests starch by the action of the enzyme ptyalin (amylase) in the saliva which converts starch (polysaccharide) into maltose (disaccharide). Saliva also contain an antibacterial enzyme called lysozyme.

Tongue: The tongue is a muscular, sensory organ which helps in mixing the food with the saliva. The taste buds on the tongue help to recognize the taste of food.

The masticated food in the buccal cavity becomes a bolus which is rolled by the tongue and passed through pharynx into the oesophagus by swallowing. During swallowing, the epiglottis (a muscular flap-like structure at the tip of the glottis, beginning of trachea) closes and prevents the food from entering into trachea (wind pipe).

The pharynx is a membrane lined cavity behind the nose and mouth, connecting them to the oesophagus. It serves as a pathway for the movement of food from mouth to oesophagus.

Oesophagus or the food pipe is a muscular-membranous canal about 22 cm in length. It conducts food from pharynx to the stomach by peristalsis (wave-like movement) produced by the rhythmic contraction and relaxation of the muscular walls of alimentary canal.

The stomach is a wide J-shaped muscular organ located between oesophagus and the small intestine. The gastric glands present in the inner walls of the stomach secrete gastric juice. The gastric juice is colourless, highly acidic, containing mucus, hydrochloric acid and enzymes rennin (in infants) and pepsin.

Inactive pepsinogen is converted to active pepsin which acts on the proteins in the ingested food. Hydrochloric acid kills the bacteria swallowed along with food and makes the medium acidic while the mucus protects the wall of the stomach. The action of the gastric juice and churning of food in the stomach convert the bolus into a semi-digested food called chyme. The chyme moves to the intestine slowly through the pylorus.

Small intestine The small intestine is the longest part of the alimentary canal, which is a long coiled tube measuring about 5 – 7 m. It comprises three parts- duodenum, jejunum and ileum.

1. Duodenum is C-shaped and receives the bile duct (from liver) and pancreatic duct (from pancreas).

The small intestine serves both for digestion and absorption. It receives (i) the bile from liver and (ii) the pancreatic juice from pancreas in the duodenum. The intestinal glands secrete the intestinal juices.

Liver: It is the largest digestive gland of the body which is reddish brown in colour. It is divided into two main lobes, right and le lobes. The right lobe is larger than the le lobe. On the under surface of the liver, gall bladder is present. The liver cells secrete bile which is temporarily stored in the gall bladder. Bile is released into small intestine when food enters in it. It has bile salts (sodium glycolate and sodium tauraglycolate) and bile pigments (bilirubin and biliviridin). Bile salts help in the digestion of fats by bringing about their emulsi cation (conversion of large fat droplets into small ones).

·           Produces fibrinogen and prothrombin, used for clotting of blood

·           Detoxifies substances including drugs and alcohol

It is a lobed, leaf shaped gland situated between the stomach and duodenum. Pancreas acts both as an exocrine gland and as an endocrine gland. The exocrine part of the pancreatic gland secretes pancreatic juice which contains three enzymes- lipase, trypsin and amylase which acts on fats, proteins and starch respectively. The gland’s upper surface bears the islets of Langerhans which have endocrine cells and secrete hormones in which α (alpha) cells secrete glucagon and β (beta) cells secrete insulin. 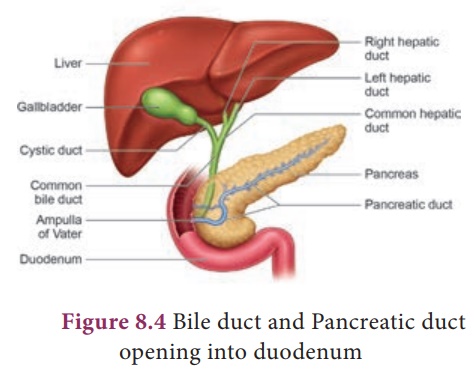 The intestinal glands secrete intestinal juice called succus entericus which contains enzymes like maltase, lactase, sucrase and lipase which act in an alkaline medium. From the duodenum the food is slowly moved down to ileum, where the digested food gets absorbed

Absorption is the process by which nutrients obtained after digestion are absorbed by villi and circulated throughout the body by blood and lymph and supplied to all body cells according to their requirements.

Assimilation means the incorporation of the absorbed food materials into the tissue cells as their internal and homogenous component. The final products of fat digestion (fatty acids and glycerol) are again converted 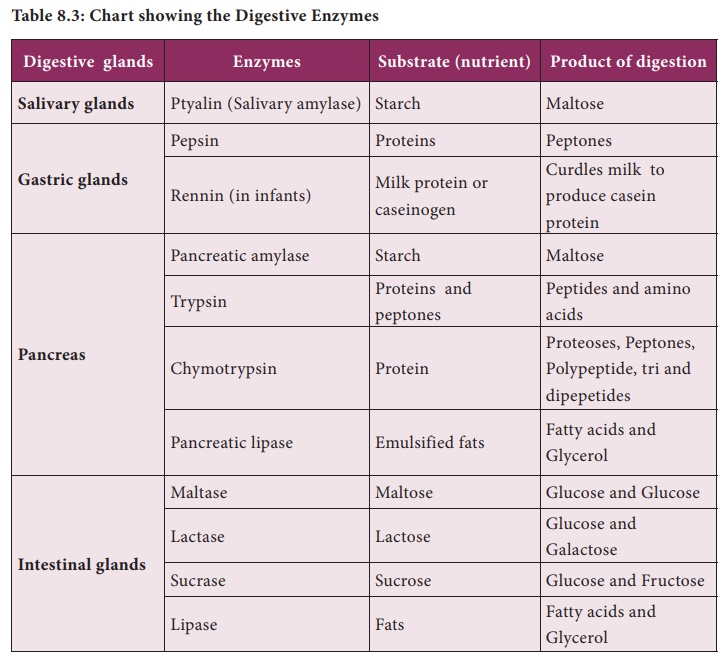 into fats and excess fats are stored in adipose tissue. The excess sugars are converted into a complex polysaccharide, glycogen in the liver. The amino acids are utilized to synthesize different proteins required for the body.

The unabsorbed and undigested food is passed into the large intestine. It extends from the ileum to the anus. It is about 1.5 meters in length. It has three parts- caecum, colon and rectum.

The caecum is a small blind pouch like structure situated at the junction of the small and large intestine. From its blind end a nger – like structure called vermiform appendix arises. It is a vestigeal (functionless) organ in human beings.

The colon is much broader than ileum. It passes up the abdomen on the right (ascending colon), crosses to the le just below the stomach (transverse colon) and down on the le side (descending colon). The rectum is the last part which opens into the anus. 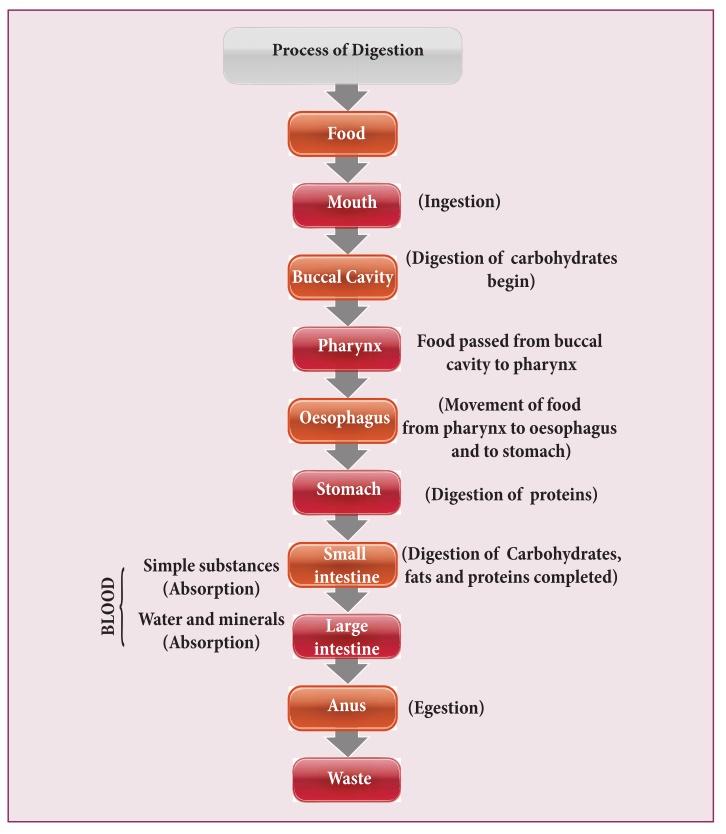