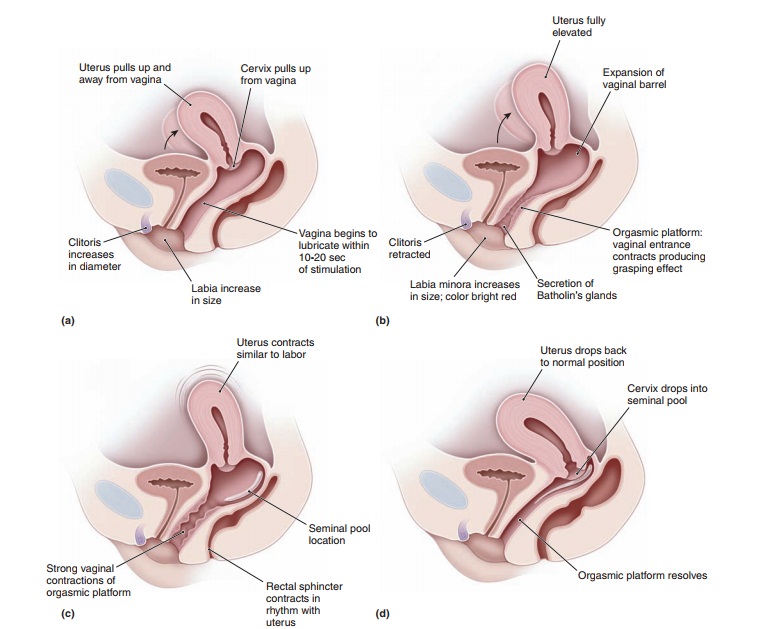 In evaluating sexual problems, it is useful to consider the mechanisms of sexual response in women.

In evaluating sexual problems, it is useful to consider the mechanisms of sexual response in women. Sexual function and dysfunction are perhaps the supreme exam-ples of a necessary blending of mind and body. This inter-action is crucial to the understanding of the assessment and management of sexual problems. The dualistic ap-proach common to more traditional models of sexual response limits the understanding of female sexuality inso-far as it suggests that dysfunction is either psychologic or biologic or psychologic plus biologic. Newer approaches are more holistic in their representations of female sexual response.

The traditional Masters and Johnson and Kaplan models of the human sexual response cycle are being replaced by intimacy-based sexual response models that take other factors into consideration. The traditional cycle depicts a linear sequence of events: desire, arousal, plateau of constant high arousal, peak intensity arousal and release (orgasm), possible repeated orgasms, and then resolution (Fig. 47.1). However, the sexual response cycle in women is complex and events do not always occur in a predictable sequence, as they usually do in men. 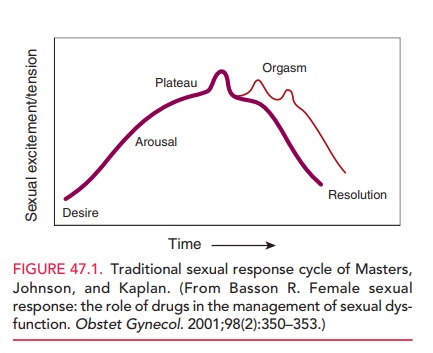 Neither the stimuli to which the response occurs nor the nature of the “cyclicity” is evident in the traditional model. The usefulness of this model for depicting women’s sexuality is limited by the following considerations:

·      Women are sexual for many reasons—sexual desire, as in sexual thinking and fantasizing, may be absent initially.

·      The phases of women’s desire and arousal overlap.

·      Arousal and orgasm are not separate phenomena.

·      The intensity of arousal (even if orgasm occurs) is highly variable from one occasion to another.

·      Orgasm may not be necessary for satisfaction.

·  The outcome of the experience strongly influences the motivation to repeat it.

An alternative sexual response model depicts an intimacy-based motivation, integral sexual stimuli, and the psycho-logical and biologic factors that govern the processing of those stimuli (i.e., determining the woman’s arousability) (Fig. 47.2). 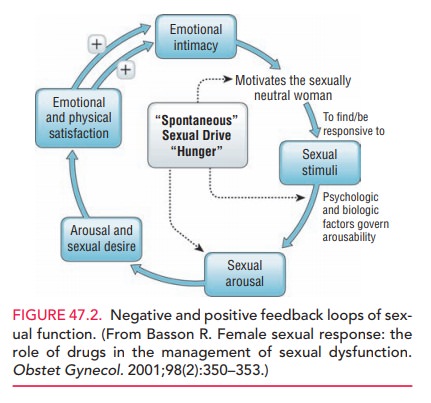 A woman’s primary motivation for sexual response often is to be closer to her partner. If sexual arousal is expe-rienced, the stimuli continue, the woman remains focused, and the sexual arousal is enjoyed, she may then sense sexual desire to continue the experience for the sake of the sexual sensations. A psychologic and physically positive outcome heightens emotional intimacy with her partner, thereby strengthening the motivation. Any spontaneous desire (i.e., sexual thinking, conscious sexual wanting, and fantasiz-ing) may augment the intimacy-based cycle. Spontaneous desire is particularly common early in relationships or when partners have been apart, is sometimes related to the men-strual cycle, and is extremely variable among women.

Systemically, the physiologic components of the female sexual response (Box 47.1) are mediated by increased activity of the autonomic nervous system and include tachy-cardia, skin flushing, and vaginal lubrication. 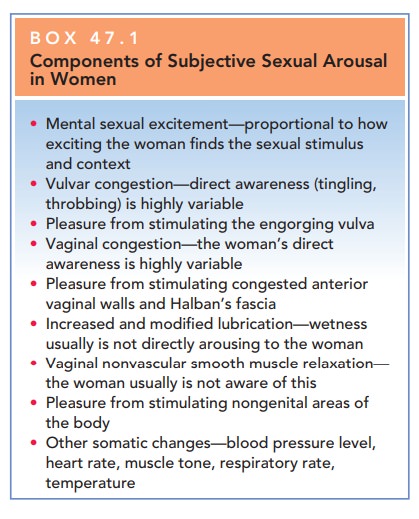 Pleasure from stimulating the engorging vulva

Pleasure from stimulating nongenital areas of the body

Several neuro-transmitters have been linked to the sexual response cycle. Norepinephrine, dopamine, oxytocin, and serotonin via 5-hydroxytriptamine 1A and 2C are thought to have positive sexual effects; serotonin via most other receptors, prolactin, and gamma-amino butyric acid are thought to affect the cycle negatively. 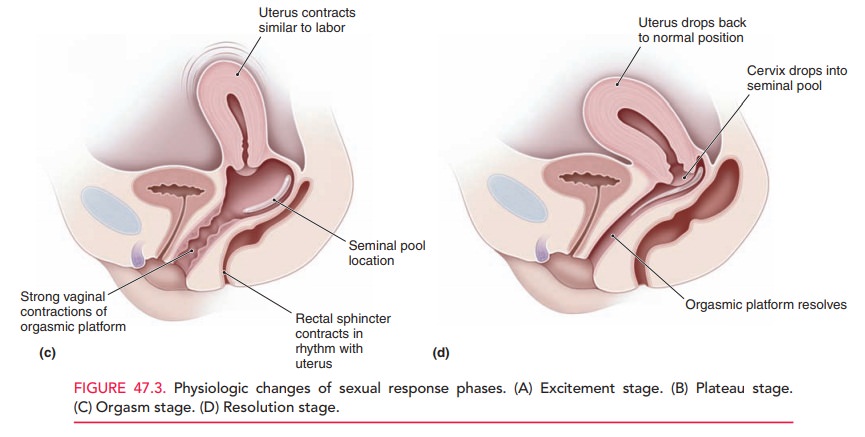 The measurement most commonly used for vaginal congestion is the vaginal pulse amplitude. The upper por-tion of the vagina dilates via a mechanism that is poorly understood. Figure 47.3 demonstrates some of the physio-logic changes seen in sexual response phases. The duration of each phase varies with each individual and for a given indi-vidual at different times in her life, and phases also can overlap. Moreover, the state of subjective arousal is itself cognitively appraised. Women consider the appropriateness of being sexual in a particular situation and evaluate their safety. This moment-to-moment emotional and cognitive feedback modulates the experience of arousal. The value of the phases depicted, then, lies in their use in identifying the physiologic events that occur during intimate encounters leading to climax. Clinically, the provider can inquire, dur-ing the initial interview and in the course of ongoing ther-apy, about whether or not these responses exist.