How are patients with pheochromocytoma prepared for surgery?

Mortality associated with pheochromocytoma resection has been reduced from 20%, in reports 20 years ago, to 0–1% in recent reports.

How are patients with pheochromocytoma prepared for surgery?

Mortality associated with pheochromocytoma resection has been reduced from 20%, in reports 20 years ago, to 0–1% in recent reports. There has been a similar reduction in reported major morbidity such as myocardial infarction and stroke. This dramatic reduction probably represents some publication bias, but is largely due to gradual pre-operative vasodilation and intravascular volume repletion. Chronic exposure to norepinephrine produces chronic vasoconstriction and hypovolemia. Rapid attempts to vasodilate and restore intravascular volume can produce complications and may serve little purpose. If the patient is not suffering from an acute hypertensive emergency, it is best to allow for a more gradual correction of the volume status. 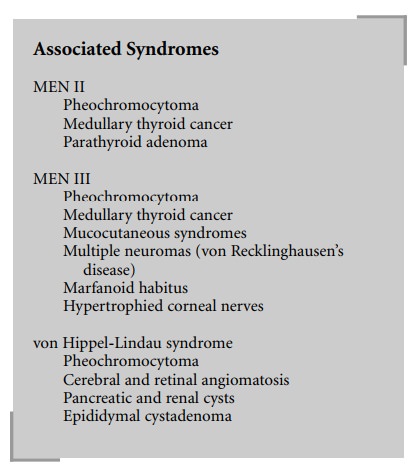 Outpatient administration of phenoxybenzamine, an α-adrenergic blocking agent, has been the standard pre-operative therapy for pheochromocytoma. The initial dose is approximately 20 mg/day, and this is titrated gradually to control blood pressure. Common side-effects include pos-tural hypotension and nasal stuffiness. Therapy often requires a 2-week period.

Phenoxybenzamine has two characteristics that make it less than ideal. First, it is a nonselective α-blocker, so it prevents the α2-mediated inhibition of norepinephrine and epinephrine release. Thus, most patients need simulta-neous β-adrenergic blockade. Phenoxybenzamine is also a noncompetitive inhibitor that binds covalently. This causes more frequent and more resistant postoperative hypo-tension than other alternative therapies. Phenoxy-benzamine should be withheld for at least 12 hours before surgery.

Prazosin and doxazosin, selective α1-adrenergic blockers, may be substituted for phenoxybenzamine. These are competitive inhibitors with shorter half-lives, and cause less postoperative hypotension. Both these drugs can be continued until the morning of surgery. Patients treated with these agents usually do not require β-blockade, unless their tumor secretes epinephrine or dopamine.

Treatment with calcium-channel blockers has been advocated in several small published series and case reports. 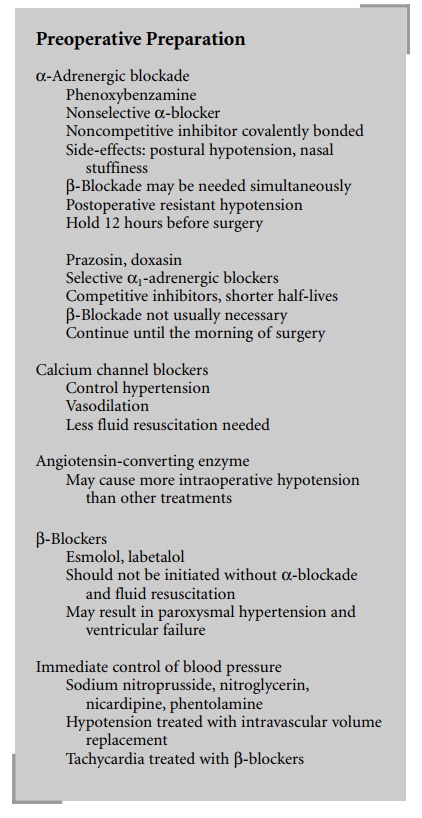 This treatment provides control of hypertension and vasodilation, but may necessitate less fluid replace-ment and cause less hypotension than treatment with phenoxybenzamine. With only small studies, there is no strong evidence to recommend this over α-blockade.

Angiotensin-converting enzyme inhibitors have also been used for preoperative blood pressure control and vasodilation. There is no apparent benefit to using these agents, and they may cause more intraoperative hypoten-sion than other treatment options.

Immediate control of systemic blood pressure may be achieved for emergency cases through intravenous admin-istration of vasodilators with a rapid onset and short dura-tion of action. Drugs that fit this profile include sodium nitroprusside, nitroglycerin, nicardipine, and the pure α-blocker phentolamine. Postural hypotension is treated with intravascular volume repletion. A common side-effect of most of these medications is tachycardia. The relative risk that tachycardia imposes on these patients must be considered and potentially treated with intravenous β-blocking drugs.

Presently four β-blockers are available: esmolol, propranolol, metoprolol, and labetalol. These drugs differ widely in their characteristics and duration of action. Esmolol is β1-selective and has a very short duration of action. Propranolol is intermediate in duration but nonselective. While metoprolol is β1-selective, it is perhaps too long-lasting to be useful in this condition. Labetalol is nonselective in its β-blockade and has an additional beneficial effect of mild α-blockade. β-Blockade should never be initiated before at least partial α-blockade and intravascular resuscitation. β-Blockade with unopposed α-adrenergic stimulus can produce paroxysmal hyperten-sion and acute left ventricular failure.