Chapter: Essentials of Anatomy and Physiology: The Human Organism 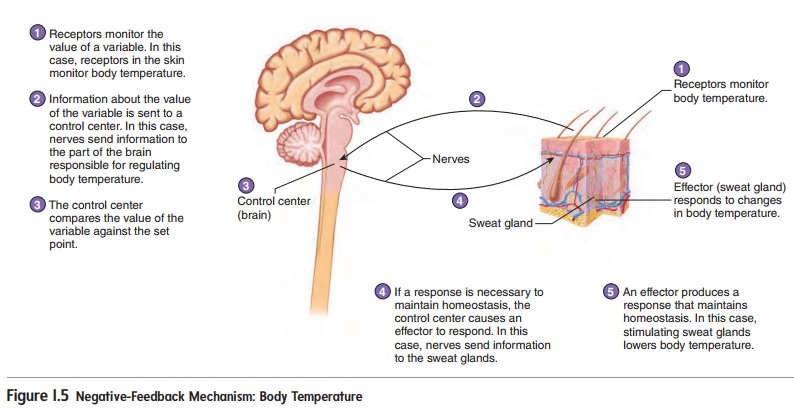 A.   Define homeostasis, and explain why it is important for proper body function.

B.   Describe a negative-feedback mechanism and give an example.

C.   Describe a positive-feedback mechanism and give an example.

Homeostasis (h̄o′m̄e-̄o-st̄a′sis;homeo-,the same) is the existenceand maintenance of a relatively constant environment within the body despite fluctuations in either the external environment or the internal environment. Most body cells are surrounded by a small amount of fluid, and normal cell functions depend on the mainte-nance of the cells’ fluid environment within a narrow range of con-ditions, including temperature, volume, and chemical content. These conditions are called variables because their values can change. For example, body temperature is a variable that can increase in a hot environment or decrease in a cold environment.

Homeostasis is the maintenance of a variable, such as body temperature, around an ideal normal value, or set point. The value of the variable fluctuates around the set point to establish a normal range of values. 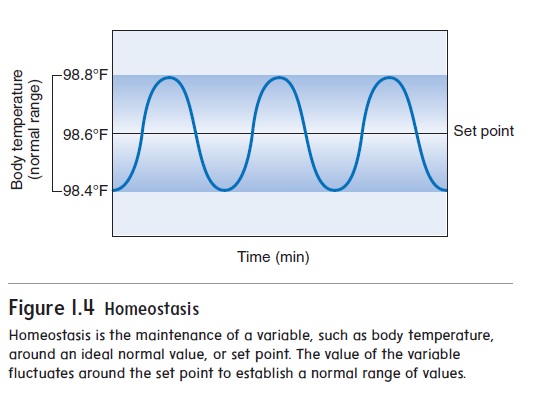 The organ systems help control the internal environment so that it remains relatively constant. For example, the digestive, respiratory, cardiovascular, and urinary systems function together so that each cell in the body receives adequate oxygen and nutri-ents and so that waste products do not accumulate to a toxic level. If the fluid surrounding cells deviates from homeostasis, the cells do not function normally and may even die. Disease disrupts homeostasis and sometimes results in death. Modern medicine attempts to understand disturbances in homeostasis and works to reestablish a normal range of values.

Most systems of the body are regulated by negative-feedbackmechanisms, which maintain homeostasis.Negativemeans thatany deviation from the set point is made smaller or is resisted. Negative feedback does not prevent variation but maintains varia-tion within a normal range.

Many negative-feedback mechanisms, such as the one thatmaintains normal body temperature, have three components: (1) A ′tŏr, rē- such as body temperature; (2) a control center, such as part of the brain, establishes the set point around which the variable is maintained; and (3) an effector (ē-fek′tŏr), such as the sweat glands, can change the value of the variable. A changed variable is a stimulus because it initiates a homeostatic mechanism. 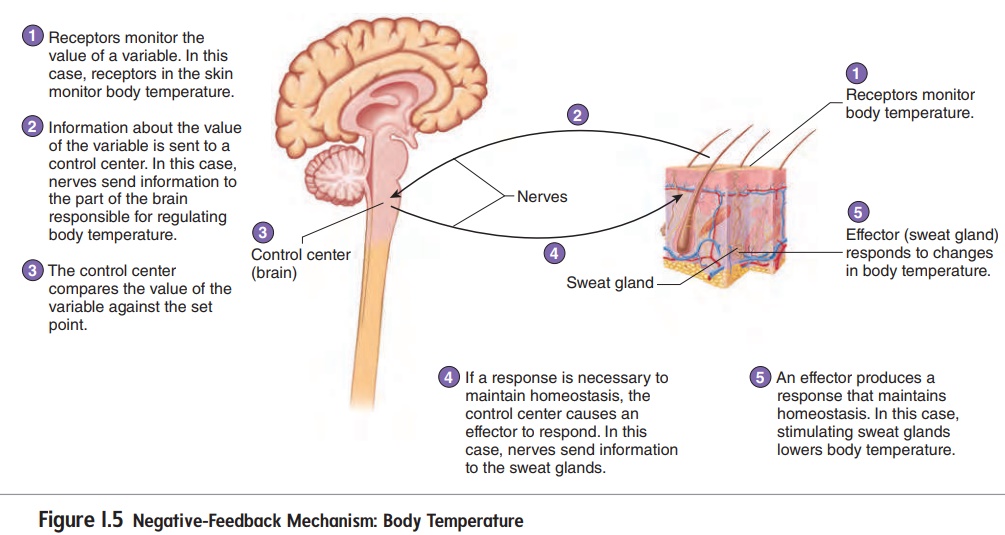 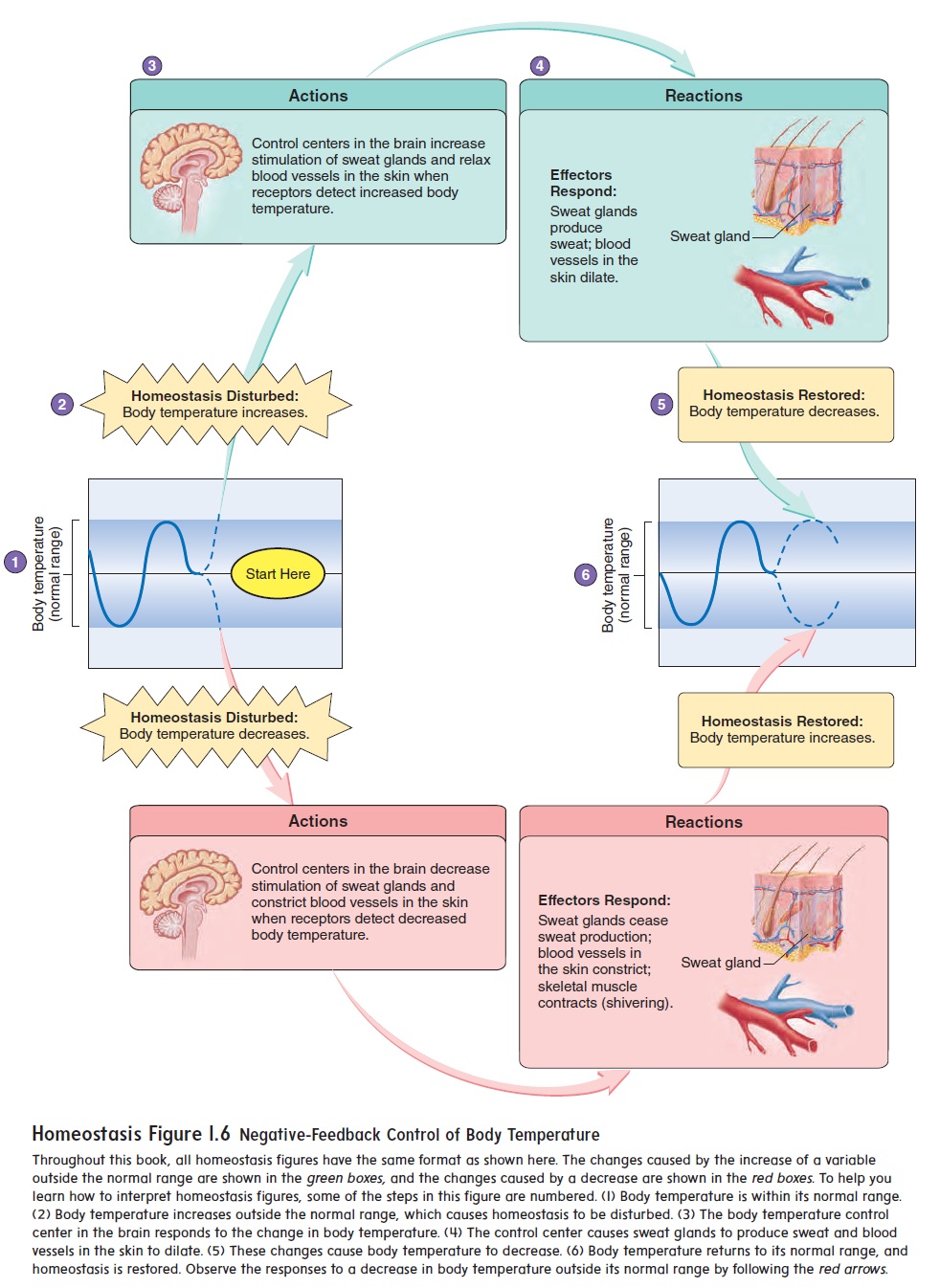 Positive-feedback mechanisms occur when the initial stimulusfurther stimulates the response. In other words, the deviation from the set point becomes even greater. At times, this type of response is required to re-achieve homeostasis. For example, during blood loss, a chemical responsible for clot formation stimulates production of itself. In this way, a disruption in homeo-stasis is resolved through a positive-feedback mechanism. What prevents the entire vascular system from clotting? The clot forma-tion process is self-limiting. Eventually, the components needed to form a clot will be depleted in the damaged area and more clot material cannot be formed (figure 1.7).

Birth is another example of a normally occurring positive-feedback mechanism. Near the end of pregnancy, the uterus is stretched by the baby’s large size. This stretching, especially around the opening of the  uterine muscles. The uterine contractions push the baby against the opening of the uterus, stretching it further. This stimulates additional contractions, which result in additional stretching. This positive-feedback sequence ends when the baby is delivered from the uterus and the stretching stimulus is eliminated. 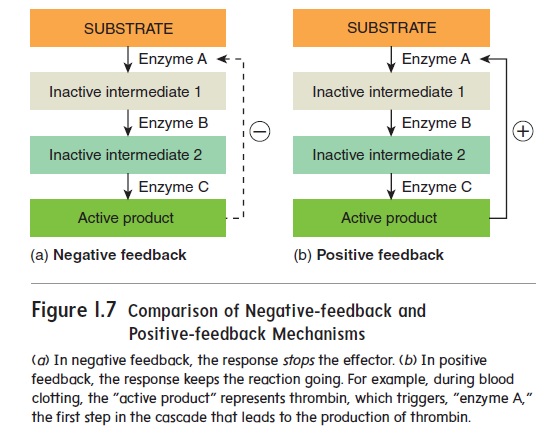