The most common use of the H1-receptor antagonists is for the relief of allergic reactions such as rhinitis and ur-ticaria. These compounds are also used to prevent mo-tion sickness, to treat vestibular disturbances, such as Ménière’s syndrome, and as over-the-counter sleep aids.

The H1-receptor antagonists for the most part are sub-stituted ethylamine compounds. In comparison with his-tamine, the H1-antagonists contain no imidazole ring and have substituents on the side chain amino group.

The H1-antagonists are classified as either first- or second-generation compounds. Second-generation anti-histamines have lipophilicity and ionization profiles that make them less able to cross the blood-brain barrier; thus they produce dramatically less sedation than do the first-generation drugs.

First-generation antihistamines are well absorbed after oral administration, with peak blood levels occurring within 1 to 2 hours; the therapeutic effect usually lasts 4 to 6 hours, although some drugs are much longer acting (Table 38.2). These antagonists are generally metabo-lized in the liver through hydroxylation. The metabo-lites and a small amount of parent compound are ex-creted in the urine. 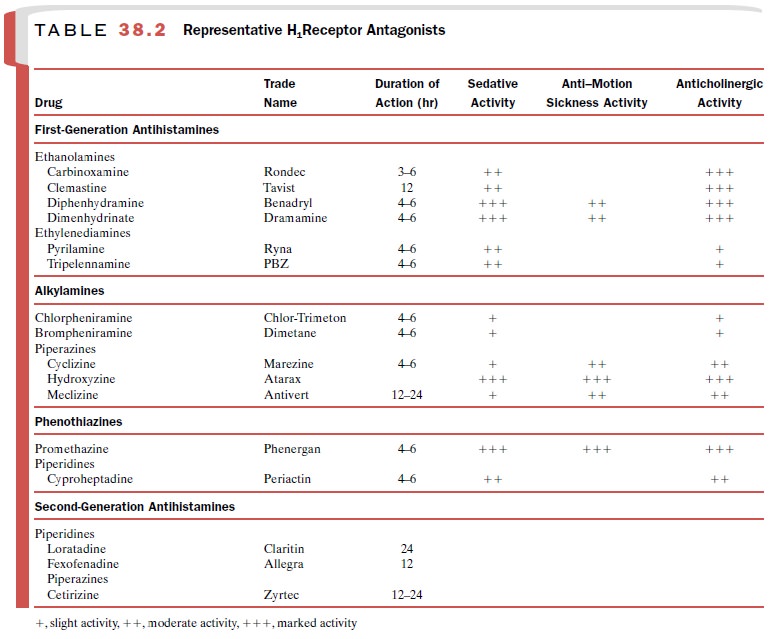 The second-generation H1-receptor antagonists are also rapidly absorbed, with peak plasma concentrations being reached within 1 to 3 hours. Their duration of ac-tion generally varies between 4 and 24 hours (Table 38.2). Loratadine (Claritin) and its active metabolite, desloratadine (Clarinex), undergoes extensive first-pass metabolism and is converted by CYP3A4 isozymes to an active metabolite. A number of drug interactions re-sult from the ability of various compounds to induce, in-hibit, or compete for metabolism by this cytochrome P450 system. In contrast, cetirizine (Zyrtec) and fexofe-nadine (Allegra) undergo little hepatic metabolism and are eliminated mainly as unchanged compounds in the urine and feces, respectively.

The reduction in therapeutic effectiveness that can occur when antihistamines are given for long periods is probably related to an induction of hepatic drug-metabolizing enzymes. Children tend to eliminate anti-histamines more rapidly than adults, while individuals with hepatic impairment may eliminate them more slowly.

The therapeutic effectiveness of these drugs arises from their capacity to block histamine-mediated vasoconstriction, microvascular permeability enhancement, and sensory nerve terminal stimulation. H1-antagonists generally produce sedation through an effect on the CNS; however, excitation can occur when toxic dosages are ingested.

Many of these drugs have effects that are not medi-ated by H1-receptors (Table 38.2). The antimuscarinic ac-tivity of several first-generation H1-blockers may account for their effectiveness in combating motion sickness and their limited ability to suppress parkinsonian symptoms. The phenothiazines have some capacity to block α- adrenoceptors, whereas cyproheptadine (Periactin) is an antagonist at serotonin receptors. Diphenhydramine (Benadryl), pyrilamine (Ryna), and promethazine (Phen-ergan) are effective local anesthetics. Many second-generation antihistamines also have been found to in-hibit the non–histamine-mediated release of various inflammatory substances; this may account for some of their effectiveness in allergic conditions.

Sedation is the most frequent adverse reaction to the first-generation antihistamines. An additive effect on alertness and motor skills will result if alcohol or an-other depressant is taken with these drugs. Anti-muscarinic effects caused by these drugs include dry mouth and respiratory passages, urinary retention, and dysuria. Nausea, vomiting, constipation or diarrhea, dizziness, insomnia, nervousness, and fatigue also have been reported. Drug allergy, especially after topical ap-plication, is fairly common. Tolerance to certain antihis-tamines may develop after prolonged administration. Teratogenic effects of the piperazine antihistamines have been shown in animal studies. Epidemiologicalstudies have not shown such an association in humans. The effects of toxic doses of first-generatio n antihista-mines, similar to those seen following atropine adminis-tration, include excitement, hallucinations, dry mouth, dilated pupils, flushing, convulsions, urinary retention, sinus tachycardia, coma, and death.

The second-generation H1-antagonists are often re-ferred to as nonsedating antihistamines; however, doses above the usual therapeutic level can cause sleepiness in certain individuals. A more serious adverse effect of some earlier second-generation antihistamines is car-diotoxicity. Terfenadine (Seldane) and astemizole (Hismanal) were withdrawn from the U. S. market after they were found, in rare cases, to induce a potentially fa-tal ventricular arrhythmia, torsades de pointes. These drugs block the cardiac K+ channels responsible for the repolarizing current (IKr) of the action potential  and therefore prolong the QT interval. Arrhythmias result when these drugs accumulate to toxic levels, such as when their metabolism is impaired, as in liver disease or following coadministration of drugs that inhibit the CYP3A family of enzymes. Fexofenadine, the active antihistaminic metabolite of terfenadine, does not produce torsades de pointes.

The H1-receptor blocking drugs find their greatest use in the symptomatic treatment of allergic conditions. The second-generation antihistamines and the first-generation alkylamines are most frequently used to treat allergic rhinitis. Allergic conjunctivitis and the acute form of urticaria are also effectively treated with antihistamines. The allergic responses seen in suscepti-ble individuals after intradermal injections of allergens (e.g., skin testing) can be prevented for several hours by prior administration of H1-antagonists. However, the H1-antagonists are not drugs of choice in acute anaphy-lactic emergencies or the viral-caused common cold.

Although the antihistamines are not useful as pri-mary agents in the treatment of asthma, a number of studies have shown that the second-generation com-pounds are effective as adjunctive therapies in asthmatic patients with concomitant rhinitis, urticaria, or dermati-tis. Cetirizine has been used to prevent the progression from atopic dermatitis to asthma in young children.

Another important use of H1-antagonists is in the treatment of motion sickness. Diphenhydramine (Benadryl), dimenhydrinate (Dramamine), cyclizine (Marezine), and meclizine (Antivert) have anticholiner-gic activity and are the preferred antihistaminic agents for reducing the symptoms of motion sickness.

Diphenhydramine is known to be at least partially ef-fective in Parkinson’s disease, perhaps because of its an-ticholinergic properties.

Many H1-receptor blocking drugs have sedative properties, and some have been used in over-the-counter sleep aids. The most widely used H1-blocking drugs for sleep induction are diphenhydramine, pro-methazine, and pyrilamine.

The H2-receptor blockers include cimetidine, famoti-dine, and ranitidine. These drugs are used to decrease gastric acid secretion in the treatment of peptic ulcer, gastroesophageal reflux disorder, and hypersecretory conditions, such as Zollinger-Ellison syndrome.

Although cromolyn sodium (Intal) and nedocromil sodium (Tilade) are widely known for their ability to prevent the release of histamine and other inflamma-tory mediators by mast cells during the early response to antigen challenge, these drugs have a wide variety of inhibitory effects on many cell types, including eosinophils, neutrophils, monocytes, and neurons. Cromolyn sodium and nedocromil sodium are used as pulmonary inhalants in the treatment of asthma. Nasal (Nasalcrom) and ophthalmic (Opticrom) preparations of cromolyn sodium can be used to reduce the symp-toms of allergic rhinitis and conjunctivitis.

None of the selective agonists and antagonists of H3-receptors are available for clinical use. Antagonists of H3-mediated inhibition of neurotransmission may have potential in the treatment of CNS disorders, since ani-mal studies have found that these compounds may en-hance learning, ameliorate learning deficits, and de-crease seizure activity. H3-receptor agonists have been shown to inhibit gastric acid release and block certain inflammatory processes. In cardiac ischemia, they can prevent the arrhythmia and cardiac damage that may result from norepinephrine overflow and thus may be useful in the treatment of myocardial infarction. Selective agonists and antagonists of H4-receptors are not yet available.