Sinus problems, hay fever, bronchial asthma, hives, eczema, contact dermatitis, food allergies, and reactions to drugs are all allergic reactions associated with the re-lease of histamine and other autocoids, such as sero-tonin, leukotrienes, and prostaglandins.

Sinus problems, hay fever, bronchial asthma, hives, eczema, contact dermatitis, food allergies, and reactions to drugs are all allergic reactions associated with the re-lease of histamine and other autocoids, such as sero-tonin, leukotrienes, and prostaglandins. Histamine re-lease is frequently associated with various inflammatory states and may be increased in urticarial reactions, mas-tocytosis, and basophilia. Histamine also acts as a neu-rotransmitter in the central nervous system (CNS). Upon release from its storage sites, histamine exerts ef-fects ranging from mild irritation and itching to ana-phylactic shock and eventual death.

Histamine is found in animal tissues and venoms and in many bacteria and plants. Within the human body, the largest histamine concentrations are in the skin, lungs, and gastrointestinal mucosa, while concentrations are smaller in almost all other organs and tissues. Histamine is present in human plasma at relatively low concentra-tions (usually less than 0.5 ng/mL); in contrast, whole-blood levels can be as high as 30-fold greater. Substantial quantities of histamine are present in urine, with excre-tion rates varying from 10 to 40 g per 24 hours.

Virtually all of the histamine found in individual organs and tissues is synthesized locally and stored in subcellu-lar secretory granules. Within the tissues, the mast cells are the principal sites of storage; in the blood, the ba- sophils serve this function. Histamine is also present in neurons of the CNS, where it acts as a neurotransmitter.

Histamine is synthesized from the amino acid histi-dine by an action of the enzyme histidine decarboxylase (Fig. 38.1). Following synthesis, histamine is either rap-idly inactivated or stored in the secretory granules of mast cells and basophils as an inactive complex with proteases and heparin sulfate or chondroitin sulfate. 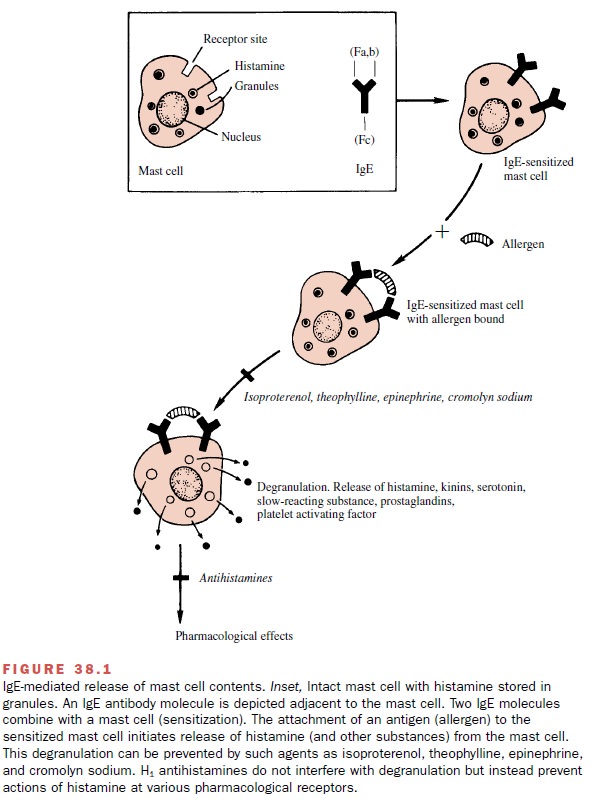 Histamine can be released from mast cell granules in two ways, both of which have pharmacological impor- tance. Endogenous or exogenous compounds can pro-mote an exocytotic release of histamine without cell de-struction or lysis. Alternatively, histamine can be re-leased from mast cells by a variety of nonexocytotic processes, including mast cell lysis, modification of mast cell membranes, and physical displacement of histamine.

Both exocytotic and nonexocytotic mechanisms can contribute to adverse drug reactions that involve hista-mine release. Histamine is only one of several potent physiological mediators that are released from mast cells; the other substances can also contribute to the overall immediate hypersensitivity reaction.

Specific antigen–antibody interactions initiate the degran-ulation of tissue mast cells and blood basophils as part of the immediate hypersensitivity reaction. Immunoglobulin E (IgE) antibodies (reaginic antibodies) directed against an allergenic substance attach to the outer surface of the cell membrane and initiate a series of biochemical events that culminate in the release of the secretory granule con-tents (Fig. 38.1).Although allergens are the most frequent initiators of immediate hypersensitivity reactions, certain drugs, particularly in association with endogenous high-molecular-weight molecules, may also promote the sensi-tization process and mast cell degranulation on subse-quent drug exposure.

Certain endogenous and exogenous compounds modulate the antigen-mediated release of histamine from sensitized tissues. Histamine inhibits its own re-lease in skin mast cells and blood basophils by binding to H2 histamine receptors, which when activated, inhibit degranulation. This feedback inhibition does not appear to occur in lung mast cells. Agonists of β2-adrenoceptors inhibit antigen-induced histamine release from mast cells, whereas muscarinic and α-adrenergic agonists en-hance mast cell degranulation.

Histamine may be released from mast cells by mecha-nisms that do not require prior sensitization of the im-mune system. Drugs, high-molecular-weight proteins, venoms, and other substances that damage or disrupt cell membranes can induce the release of histamine. Any thermal or mechanical stress of sufficient intensity also will result in histamine release. Cytotoxic com-pounds, may release histamine as the result of disrup-tion of cell membranes.

The inactivation of histamine is achieved both by enzy-matic metabolism of the amine and by transport processes that reduce the concentration of the com-pound in the region of its receptors. Histamine metabo-lism occurs primarily through two pathways (Fig. 38.1). The most important of these involves histamine N-methyltransferase, which catalyzes the transfer of amethyl group from S-adenosyl-1-methionine to one of the imidazole nitrogen substitutions, forming 1-methyl-histamine. This enzyme is present in tissues but not in blood. 1-Methylhistamine is converted by monoamine oxidase (MAO) to 1-methylimidazoleacetic acid.

An alternative pathway of histamine metabolism in-volves oxidative deamination by the enzyme diamine oxidase (histaminase) to form 5-imidazoleacetic acid. Diamine oxidase is present in both tissues and blood and plays a particular role in metabolizing the large concentrations of histamine that may be present in food. An additional metabolite, N-acetyl histamine (a conjugate of acetic acid and histamine), can be pro-duced if histamine is ingested orally. This product may result from metabolism of histamine by gastrointestinal tract bacteria. Because of its rapid breakdown after oral administration, histamine produces few systemic effects when given by this route.

Histamine mediates a diverse group of processes rang-ing from vasodilation to gastric acid secretion. It pro-duces its effects by binding to and activating receptors on the surface of cardiac, smooth muscle, endothelial, neuronal, and other cells. There are at least four recep-tor populations, H1, H2, H3, and H4. All four receptor subtypes have been cloned and belong to the G pro-tein–coupled receptor superfamily. The histamine re-ceptors can be distinguished on the basis of their post–receptor signal transduction mechanisms, tissue distribution, and sensitivities to various agonists and an-tagonists (Table 38.1). Currently, only the H1- and H2-receptors are targets of clinical drug therapy.

A slow intravenous injection of histamine produces marked vasodilation of the arterioles, capillaries, and venules. This causes a fall in blood pressure whose mag-nitude depends on the concentration of histamine in-jected, the degree of baroreceptor reflex compensation, and the extent of histamine-induced release of adrenal catecholamines. Vasodilation of cutaneous blood vessels reddens the skin of the face, while a throbbing headache can result from vasodilation of brain arterioles. Vasodilation is mediated through both H1- and H2-receptors on vascular smooth muscle. Stimulation of H1-receptors produces a rapid and short-lived response, whereas stimulation of H2-receptors produces a more sustained response that is slower in onset. Stimulation of H3-receptors on sympathetic nerve terminals inhibits the release of norepinephrine and its associated vaso-constriction.

Histamine increases the permeability of capillaries and postcapillary vessels, resulting in passage of fluid and protein into the extracellular space and eventually edema. This H1-receptor–mediated process is responsi-ble for the urticarial effect of histamine on the skin (hives).

In addition to its effects on the vasculature, hista-mine exerts direct positive inotropic and chronotropic effects on the heart through the stimulation of H2-receptors. H3-receptors on sympathetic nerve terminals in the heart decrease norepinephrine release; however, this effect appears to be significant only during stress states such as ischemia.

Histamine stimulates bronchiolar smooth muscle con-traction through activation of H1-receptors. A much smaller bronchodilatory response is evoked by stimula-tion of H2-receptors. Asthmatics are generally more sensitive to the bronchoconstrictor actions of histamine than are nonasthmatics.

Histamine is able to cause uterine contraction. Although the magnitude of this effect in humans is nor-mally small, the large amounts of histamine released during anaphylactic reactions can initiate abortion in pregnant women. Histamine can also stimulate contrac-tion of gastrointestinal smooth muscle, with large doses able to produce diarrhea.

Histamine stimulates the secretion of gastric acid and pepsin through an effect on the H2-receptors of the pari-etal cells of the gastric mucosa. Secretion of acid is a complex process that is stimulated by histamine, acetyl-choline, and gastrin and inhibited by somatostatin. The ability of H2-receptor antagonists to inhibit the en-hanced gastric acid secretion caused by acetylcholine and gastrin suggests that histamine release is of primary importance in this process. Histamine also stimulates secretion by the salivary glands and glands in the small and large intestines. High concentrations of histamine promote the release of catecholamines from the adrenal gland.

Postsynaptic H1- and H2-receptors are responsible for a variety of processes in the CNS. H1-receptors mediate the maintenance of wakeful states, while H1- and H2-receptors participate in the regulation of blood pres-sure, body temperature, fluid homeostasis, and pain sen-sation. Presynaptic H3-receptors serve as feedback in-hibitors of the release of histamine, norepinephrine, and other neurotransmitters.

In the periphery, H1-receptors on sensory neurons in the epidermis and dermis mediate itch and pain, respec-tively. Autonomic afferent nerve endings may be simi-larly stimulated by histamine. As in the CNS, presynap-tic H3-receptors act in a feedback inhibitory capacity.

·              Dilation of capillaries in the immediate vicin-ity of the injection results in a local red or blue region (flush).

·              Dilation of arterioles results in an irregular red flare over an area that is generally wider than that due to the capillary dilation. The flare probably results from an axon reflex in which histamine stimulates autonomic nerve endings, causing release of vasodilatory mediators.

·              Swelling (wheal) appears in the area of capil-lary dilation. The increased permeability of the blood vessels in this region is responsible for the edema.

In addition to the flush, wheal, and flare, transient pain and itching result from the effects of histamine on sensory nerve endings. In sensitized individuals, intra-dermal injection of specific antigens produces a wheal; this reaction is the basis for a skin test to quantify the extent of the allergic response.

During an anaphylactic reaction, large quantities of in-flammatory mediators are rapidly released. The resul-tant reaction is severe and may threaten the life of the individual. The introduction of a specific antigen— usually in food or in injected material—into a sensitized individual can cause the rapid release of mast cell con-tents, producing a decrease in blood pressure, impaired respiratory function, abdominal cramps, and urticaria. Extreme and severe anaphylaxis is life threatening and requires prompt medical intervention.

Histamine has only minor uses in clinical medicine. In the past it was used to diagnose pernicious anemia, in which histamine fails to evoke the usual secretion of gastric acid. Histamine has been used to assess bronchial hyperreactivity, although this test may be quite hazardous for asthmatics. Today the main clinical use of histamine is as a positive control injection for al-lergy skin testing.