The health system in India has 3 main links A. Central B. State and C. Local or peripheral

The health system in India has 3 main links

At the Central Level 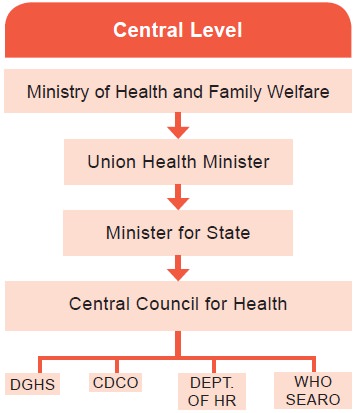 I. Ministry of Health and Family Welfare

2.        Administration of Central Institutes such as All India Institute of Hygiene and Public Health, Kolkata.

3.        Promotion of research through research centres

4.        Regulation and development of medical, pharmaceutical, dental and nursing professions

5.        Establishment and maintenance of drug standards

6.        Census and collection and publication of other statistical data

8.        Regulation of labour in the working of mines and oil fields

9.        Coordination with states and with other ministries for promotion of health

1.        Prevention and extension of communicable diseases

2.        Prevention of adulteration of food stuffs

1.        International health relations and quarantine of all major ports in country and international airport

10.   Collection, compilation, analysis, evaluation and dissemination of information through the Central Bureau of Health Intelligence

1.        To consider and recommend broad outlines of policy with regard to matters concerning health like environment hygiene, nutrition and health education.

2.        To make proposals for legislation relating to medical and public health matters.

3.        To make recommendations to the Central Government regarding distribution of grants-in-aid.

4.        To establish any organization or organizations invested with appropriate functions for promoting and maintaining cooperation between the central and state health administration

At the State Level

The health subjects are divided into three groups: federal, concurrent and state. The state list is the responsibility of the state, including provision of medical care, preventive health services and pilgrimage within the state. 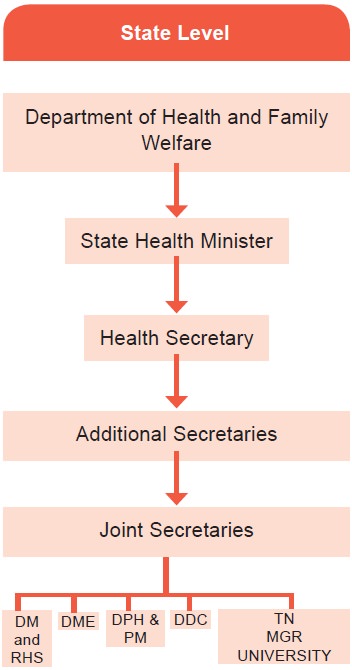 At present there are 29 states in India, each state having its own health administration. In all the states, the management sector comprises the state ministry of health and a directorate of health

There are three separate major departments in Health and Family Welfare.

·           The Directorate of medical and Rural Health Services, Directorate of Medical Education and Directorate of Public Health and preventive Medicine are the chief Technical directorates to the statte government on all matters related to public health.

At the District Level

There are 614 (year 2007) districts in India. Within each district, there are 6 types of administrative areas.

Most district in India are divided into two or more subdivision, each incharge of an Assistant Collector or Sub Collector. Each division is again divided into taluks, incharge of a Thasildhar. A taluk usually comprises between 200 to 600 villages. The community development block comprises approximately 100 villages and about 80000 to 1,20,000 population, in charge of a Block Development Officer. Finally, there are the village panchayats which are institutions of rural local self-government.

The urban areas of the district are organized into the following institutions of local self-government:

The Town Area Committees are like panchayats. They provide sanitary services. The Municipal Boards are headed by Chairman / President, elected by members.

The functions of Municipal Board & Corporations

1.        Construction and maintenance of roads

5.        Maintenance of hospitals and dispensaries

The Corporations are headed by Mayors, elected by councillors, who are elected from different wards of the city. The executive agency includes the commissioner, the secretary, the engineer and the health officer.

The activities are similar to those of municipalities on a much wider scale.

The three institutions are:

1) Panchayat (at the village level)

The Panchayat Raj at the village level consists of

The Gram Sabha considers proposals for taxation and elects members of the gram panchayat.

The Gram Panchayat covers the civic administration including sanitation and public health and work for the social and economic development of the village.

2) Panchayat Samiti (at the block level):

The Panchayat Samiti execute the community development programme in the block. The Block Development Officer and his staff give technical assistance and guidance in development work.

3) Zila Parishad (at the district level):

The Zila Parishad is primarily supervisory and coordinating body. This is the agency of rural local self-government at the district level. Its functions and powers vary from state to state.