Distributed embedded systems can be organized in many different ways depending upon the needs of the application and cost constraints.

Distributed embedded systems can be organized in many different ways depending upon the needs of the application and cost constraints. One good way to understand possible architectures is to consider the different types of interconnection networks that can be used.

A point-to-point link establishes a connection between exactly two PEs. Point to point links is simple to design precisely because they deal with only two components. We do not have to worry about other PEs interfering with communication on the link.

A digital filtering system requires that its outputs arrive at strict intervals, which means that the filters must process their inputs in a timely fashion. Using point-to-point connections allows both F1 and F2 to receive a new sample and send a new output at the same time without worrying about collisions on the communications network.

It is possible to build a full-duplex, point-to-point connection that can be used for simultaneous communication in both directions between the two PEs. (A halfduplex connection allows for only one-way communication.)

A bus is a more general form of network since it allows multiple devices to be connected to it. Like a microprocessor bus, PEs connected to the bus have addresses. Communications on the bus generally take the form of packets as illustrated in Figure 5.2. A packet contains an address for the destination and the data to be delivered. 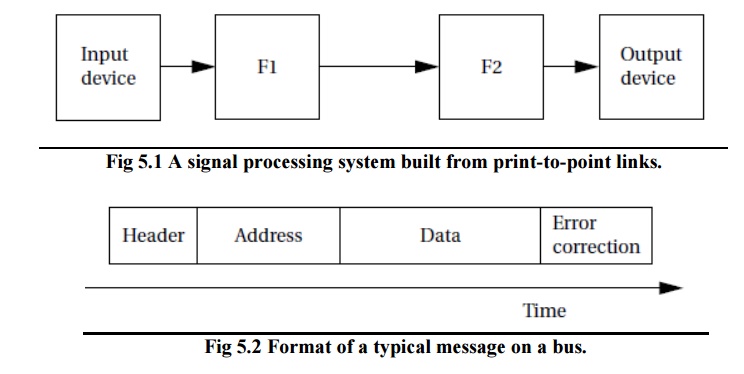 It frequently includes error detection/correction information such as parity. It also may include bits that serve to signal to other PEs that the bus is in use, such as the header shown in the figure.

The data to be transmitted from one PE to another may not fit exactly into the size of the data payload on the packet. It is the responsibility of the transmitting PE to divide its data into packets; the receiving PE must of course reassemble the complete data message from the packets.

Distributed system buses must be arbitrated to control simultaneous access, just as with microprocessor buses. Arbitration scheme types are summarized below.

A bus has limited available bandwidth. Since all devices connect to the bus, communications can interfere with each other. Other network topologies can be used to reduce communication conflicts. At the opposite end of the generality spectrum from the bus is the crossbar network shown in Figure 5.3.

A crossbar not only allows any input to be connected to any output, it also allows all combinations of input/output connections to be made. Thus, for example, we can simultaneously connect in1 to out4, in2 to out3, in3 to out2, and in4 to out1 or any other combinations of inputs. 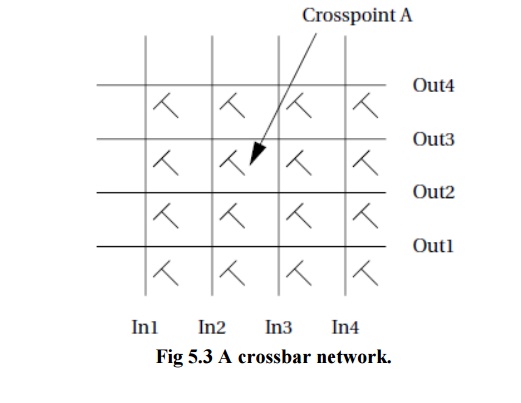 Many other networks have been designed that provide varying amounts of parallel communication at varying hardware costs. Figure 5.4 shows an example multistage network. The crossbar of Figure 5.3 is a direct network in which messages go from source to destination without going through any memory element.

Most networks are blocking, meaning that there are some combinations of sources and destinations for which messages cannot be delivered simultaneously.

A bus is a maximally blocking network since any message on the bus blocks messages from any other node. A crossbar is non-blocking.

In general, networks differ from microprocessor buses in how they implement communication protocols. Both need handshaking to ensure that PEs do not interfere with each other. But in most networks, most of the protocol is performed in software.

Microprocessors rely on bus hardware for fast transfers of instructions and data to and from the CPU. Most embedded network ports on microprocessors implement the basic communication functions (such as driving the communications medium) in hardware and implement many other operations in software. 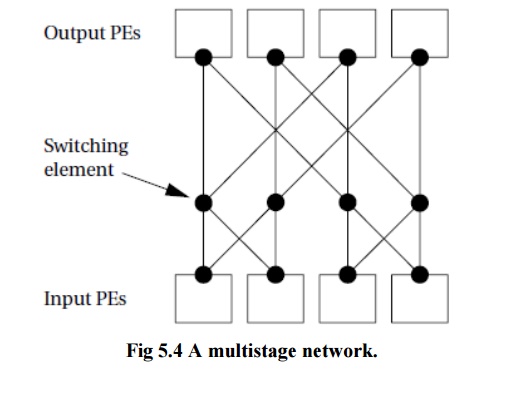 If we can segregate critical and noncritical communications onto separate networks, it may be possible to use simpler topologies such as buses. Many systems use serial links for low-speed communication and CPU buses for higher speed and volume data transfers.