GBS is a hallmark disease of molecular mimicry, resulting in several different clinical manifestations. It was initially characterized as a disease of the periph-eral nervous system because of the earli-est detection of cases of flaccid paralysis in 1859 by Landry. By 1916, Guillain, Barré, and Strohl had characterized the disease as having a rapidly developing symmetri-cal flaccid paralysis, loss of reflexes, and autonomic dysfunction, followed by a spontaneous remission. There is a pathog-nomonic dissociation in the spinal fluid of the presence of high protein, without a concomitant significantly elevated cell count. The category of pathology is primar-ily a cellular immune system–mediated demyelinating disease with infiltration of nerves by macrophages and lymphocytes (see Figure 16.1). 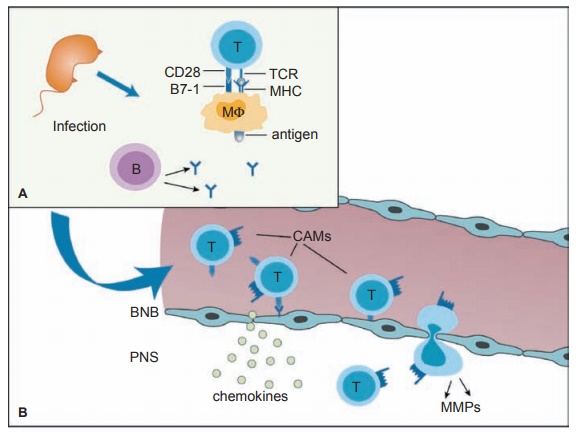 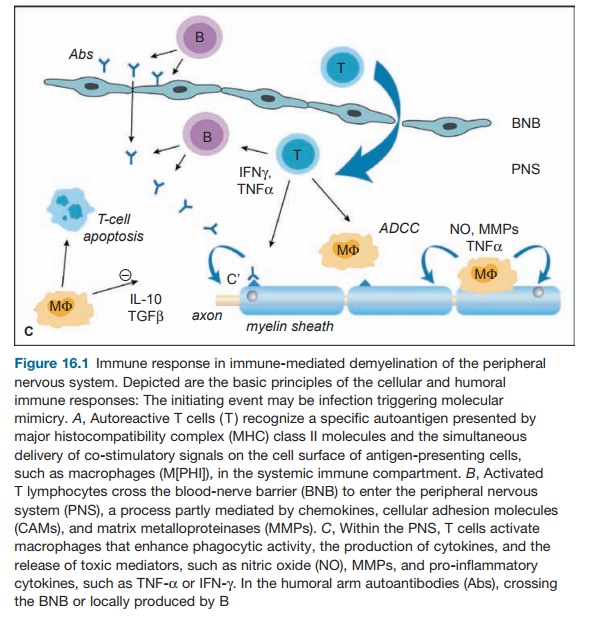 The humoral and cellular target is myelin directly or the Schwann cells that produce myelin in the peripheral nervous system (see Figure 16.2). The other name for this phenomenon is acute inflam-matory demyelinating polyneuropathy (AIDP). Similar in pathology, but mani-festing differently clinically is the Miller-Fisher variant of GBS, described as the triad opthalmoparesis, ataxia, and absent reflexes, which may then encompass the clinical AIDP form. Another variant of the disease includes the finding of cranial nerve abnormalities, which can also evolve into AIDP. These variants have variations in their immunopathology as well. 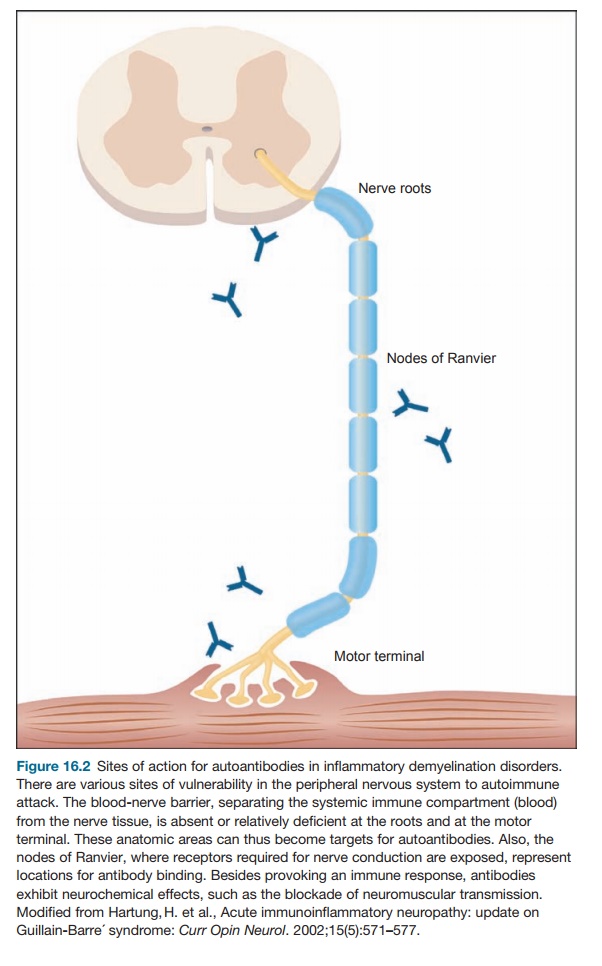 Most patients present with neurologi-cal complaints two to four weeks after a mild gastrointestinal or upper respiratory illness. The first symptoms may be tin-gling in the extremities, followed by weak-ness in the legs and loss of reflexes, all of which may develop rapidly and ascend into the arms, cranial nerves, and respira-tory muscles. The respiratory decline can occur rapidly in some patients and may be life threatening. Twenty to 30 percent require respiratory ventilators. In addition, patients can develop life-threatening auto-nomic changes, including cardiac arrhyth-mias and hypotension. Most patients are at their worst clinical state within two to four weeks and start to recover within weeks to months. A chronic, or relapsing, form of inflammatory demyelinating neuropathy also exists and is considered a different disease (chronic inflammatory demyelinat-ing polyneuropathy).

Similar to MS, a demyelinating inflam-matory disease of the CNS, an animal model exists for this peripheral demyelin-ating disease entity, EAN. This is produced by inoculation with whole myelin or spe-cific proteins of peripheral nervous system myelin in complete Freund’s adjuvant. This produces a cell-mediated immune attack on native myelin proteins.

However, more recently, basic prem-ises of this disease have been redefined. It is now recognized that there may be a dis-tinct axonal form of GBS. Electromyogra-phy has been able to distinguish these two forms. An attack against myelin and axons may be found concurrently in the same patient, with both demyelination and peri-axonal macrophages.

Molecular mimicry has been found to be the major pathogenic force and the basis for autoimmunity. Various preced-ing infections can initiate the immune response that causes the clinical state of GBS. The two major agents are Campylo-bacter and Cytomegalovirus, with Epstein-Barr virus considered an inciting agent as well. Specific features of the incit-ing organism may play a major role in the development of GBS. For instance, although Campylobacter jejuni often may cause diarrhea, the strains that have been linked to GBS (O-serotypes) are different from those strains causing diarrhea only but are genetically similar to each other. Only 70 percent of those infected with Campylobacter in the presence of GBS give a previous history of gastrointestinal com-plaints in the three months before the neu-rological onset, but the risk of developing GBS within two months of a symptomatic Campylobacter infection is 100-fold higher than the general population. GBS follow-ing C. jejuni and intestinal symptoms are felt to have a more dire clinical course, involving axonal destruction in addition to demyelination.

The Miller-Fisher variant, which involves primarily the cranial nerves, dem-onstrates the close association between antiganglioside antibodies and a specific syndrome. Anti-GQ1b has a high specificity and sensitivity for this symptom complex. GQ1b is a ganglioside that is a component of cranial nerve myelin. Similarly, anti-GM1 (anti-GD1a) antibodies have been linked specifically to the axonal form of the disease, acute motor axonal neuropathy. Although GM1 antigens can be found on motor and sensory nerves, there are vari-able reports in the literature about whether these antigens are on the axon or in the myelin sheath. However, antibodies to GM1 can bind to the nodes of Ranvier and activate complement. Other factors may be necessary for the disease to occur, as many patients with Campylobacter infections pro-duce antibodies to GM1 ganglioside but do not develop neurological symptoms. Because the disease can improve rapidly, an association between sodium channels and the antibody has been studied, but there has been no consistent association with sodium channels.

Influenza vaccine has been implicated as a causative agent for GBS as well. How-ever, careful epidemiological studies have not borne this out. Combining the 1992–1993 within six weeks of a previous flu vaccine should not be vaccinated.

The host may play a significant role in this disease as well. GBS has been associ-ated with certain major histocompatibility complex (MHC) class II genes and may determine a heightened immune response to C. jejuni, resulting in GBS in these patients compared with controls who do not go on to develop the neurological disease after exposure to Campylobacter. GBS patients may be high producers of tumor necrosis factor alpha 2 compared with controls.

In the Fisher variant, anti-GQ1b anti-bodies affect acetylcholine release at the nerve terminals. In one mouse model of disease, applying serum from patients on a mouse model is similar to that of the black widow spider venom – the inception of a large release of acetylcholine, which is cal-cium dependent. Complement is required for this reaction, either by the classical or alternative pathway. Presumably, humoral immunity is the inciting factor.

For the classic AIDP form of the dis-ease, the target antigen is still unknown. Two candidate antigens are the myelin protein PMP22 and the heparin sulfate glycosoaminoglycans. The virulence of some C. jejuni strains may be due to sev-eral factors. First, specific cross-reactive antigens may be more common in these strains. These strains may also have higher immunogenicity or may have greater inva-siveness. The O-19 strains (overly pre-sented in GBS) do have GM1-like epitopes composed of lipopolysaccharides. How-ever, other organisms do as well, including those causing enteritis only, and humans are frequently exposed to C. jejuni with GM1 cross-reactivity. Therefore, these epi-topes do not alone explain GBS.

Therapy for GBS has been directed at the immune mechanisms, but interestingly, corticosteroids have been shown to have no clinical effect, as has been established in many other neurological manifestations of autoimmune mechanisms. Instead, the two mainstays of therapy have been plasma exchange and intravenous immunoglobu-lins (IVIG). These treatments are suggested for those with illness severe enough to limit walking ability. Plasma exchange using fresh frozen plasma or albumin has been shown to increase muscle strength and decrease the time needed for a respirator to assist ventilation. Intravenous immune globulin has similar efficacy, but there is no additive effect of combining the two therapies. In animal models, IVIG has been shown to neutralize neuromuscular block-ing antibodies and inhibit binding of anti-GQ1b antibodies to GQ1b. These prevent initiation of the destructive complement cascade. Overall, 80 percent of patients recover fully or are left with only minor deficits. Up to 10 percent are left with weakness, imbalance, or loss of sensation and 3 to 8 percent die from sepsis, pulmo-nary emboli, cardiac arrest, or acute respi-ratory distress syndrome even despite care in an intensive care unit. These patients are usually older, have preexisting pulmonary disease, or were on prolonged respirator assistance.