Growth and Functional Development of the Fetus

Growth and Functional Development of the Fetus 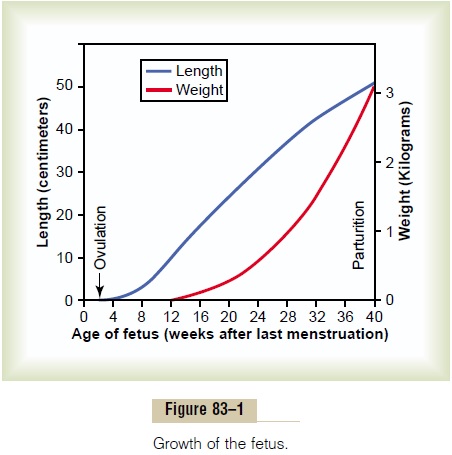 Note in Figure 83–1 that the weight remains minuscule during the first 12 weeks and reaches 1 pound only at 23 weeks (5 1/2 months) of gestation. Then, during the last trimester of pregnancy, the fetus gains tremendously, so that 2 months before birth, the weight averages 3 pounds, 1 month before birth 4.5 pounds, and at birth 7 pounds—the final birth weight varying from as low as 4.5 pounds to as high as 11 pounds in normal infants with normal gestational periods.

Development of the Organ Systems

Within 1 month after fertilization of the ovum, the gross characteristics of all the different organs of the fetus have already begun to develop, and during the next 2 to 3 months, most of the details of the different organs are established. Beyond month 4, the organs of the fetus are grossly the same as those of the neonate. However, cellular development in each organ is usually far from complete and requires the full remaining 5 months of pregnancy for complete development. Even at birth, certain structures, particularly in the nervous system, the kidneys, and the liver, lack full development.

Circulatory System. The human heart begins beating during the fourth week after fer-tilization, contracting at a rate of about 65 beats/min. This increases steadily to about 140 beats/min immediately before birth.

Formation of Blood Cells. Nucleated red blood cells begin to be formed in the yolk sacand mesothelial layers of the placenta at about the third week of fetal development. This is followed 1 week later (at 4 to 5 weeks) by formation of non-nucleated red blood cells by the fetal mesenchyme and also by the endothelium of the fetal blood vessels. Then, at 6 weeks, the liver begins to form blood cells, and in the third month, the spleen and other lymphoid tissues of the body begin forming blood cells. Finally, from the third month on, the bone marrow gradually becomes the principal source of the red blood cells as well as most of the white blood cells, except for continued lymphocyte and plasma cell production in lymphoid tissue.

During the last 3 to 4 months of pregnancy, the res-piratory movements of the fetus are mainly inhibited, for reasons unknown, and the lungs remain almost com-pletely deflated. The inhibition of respiration during the later months of fetal life prevents filling of the lungs with fluid and debris from the meconium excreted by the fetus’s gastrointestinal tract into the amniotic fluid. Also, small amounts of fluid are secreted into the lungs by the alveolar epithelium up until the moment of birth, thus keeping only clean fluid in the lungs.

Nervous System. Most of the reflexes of the fetus thatinvolve the spinal cord and even the brain stem are present by the third to fourth months of pregnancy. However, those nervous system functions that involve the cerebral cortex are still only in the early stages of development even at birth. Indeed, myelinization of some major tracts of the brain itself becomes complete only after about 1 year of postnatal life.

Kidneys. The fetal kidneys begin to excrete urine duringthe second trimester pregnancy, and fetal urine accounts for about 70 to 80 per cent of the amniotic fluid. Abnor-mal kidney development or severe impairment of kidney function in the fetus greatly reduce the forma-tion of amniotic fluid (oligohydramnios) and can lead to fetal death.

Although the fetal kidneys form urine, the renal control systems for regulating fetal extracellular fluid volume and electrolyte balances, and especially acid-base balance, are almost nonexistent until late fetal life and do not reach full development until a few months after birth.

Fetal Metabolism. The fetus uses mainly glucose forenergy, and it has a high capability to store fat and protein, much if not most of the fat being synthesized from glucose rather than being absorbed directly from the mother’s blood. In addition to these generalities, there are special problems of fetal metabolism in rela-tion to calcium, phosphate, iron, and some vitamins.

Metabolism of Calcium and Phosphate. Figure 83–2 showsthe rates of calcium and phosphate accumulation in the fetus, demonstrating that about 22.5 grams of calcium and 13.5 grams of phosphorus are accumulated in the average fetus during gestation. About one half of these accumulate during the last 4 weeks of gestation, which is coincident with the period of rapid ossification of the fetal bones and with the period of rapid weight gain of the fetus. 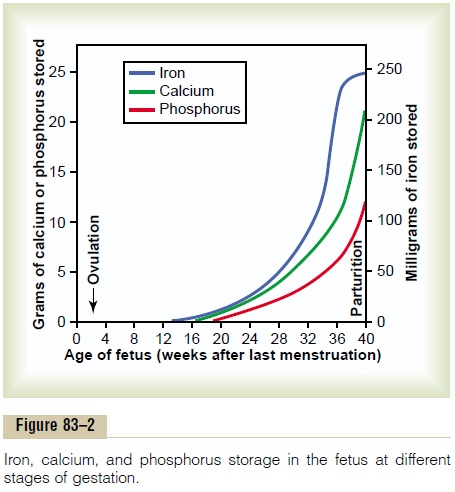 During the earlier part of fetal life, the bones are relatively unossified and have mainly a cartilaginous matrix. Indeed x-ray films ordinarily do not show any ossification until after the fourth month of pregnancy.

Note especially that the total amounts of calcium and phosphate needed by the fetus during gestation repre-sent only about 2 per cent of the quantities of these substances in the mother’s bones. Therefore, this is a minimal drain from the mother. Much greater drain occurs after birth during lactation.

Accumulation of Iron. Figure 83–2 also shows that ironaccumulates in the fetus even more rapidly than calcium and phosphate. Most of the iron is in the form of hemoglobin, which begins to be formed as early as the third week after fertilization of the ovum.

Small amounts of iron are concentrated in the mother’s uterine progestational endometrium even before implantation of the ovum; this iron is ingested into the embryo by the trophoblastic cells and is used to form the very early red blood cells. About one third of the iron in a fully developed fetus is normally stored in the liver. This iron can then be used for several months after birth by the neonate for formation of addi-tional hemoglobin.

Utilization and Storage of Vitamins. The fetus needs vitaminsequally as much as the adult and in some instances to a far greater extent. In general, the vitamins function the same in the fetus as in the adult. Special functions of several vitamins should be mentioned, however.

The B vitamins, especially vitamin B12 and folic acid, are necessary for formation of red blood cells and nervous tissue, as well as for overall growth of the fetus.

Vitamin C is necessary for appropriate formation of intercellular substances, especially the bone matrix and fibers of connective tissue.

Vitamin D is needed for normal bone growth in the fetus, but even more important, the mother needs it for adequate absorption of calcium from her gastrointesti-nal tract. If the mother has plenty of this vitamin in her body fluids, large quantities of the vitamin will be stored by the fetal liver to be used by the neonate for several months after birth.

Vitamin E, although the mechanisms of its functions are not clear, is necessary for normal development of the early embryo. In its absence in laboratory animals, spontaneous abortion usually occurs at an early stage of pregnancy.

Vitamin K is used by the fetal liver for formation of Factor VII, prothrombin, and several other blood coag-ulation factors. When vitamin K is insufficient in the mother, Factor VII and prothrombin become deficient in the fetus as well as in the mother. Because most vitamin K is formed by bacterial action in the mother’s colon, the neonate has no adequate source of vitamin K for the first week or so of life after birth until normal colonic bacterial flora become established in the newborn infant. Therefore, prenatal storage in the fetal liver of at least small amounts of vitamin K derived from the mother is helpful in preventing fetal hemorrhage, particularly hemorrhage in the brain when the head is traumatized by squeezing through the birth canal.