Question tags are short questions at the end of the statements.

Look at the following pictures

i) Father asks his son to confirm whether he wants a chocolate. He needs confirmation.

ii) Suganya asks her friend to confirm that she has a test tomorrow.

That’s how tags are used to confirm that something is true or not and to encourage a reply from the person we are speaking to.

Tags are formed with the auxiliary or modal verb, from the given statement with the appropriate subject (Pronoun)

Negative auxiliaries and verbs in tags are usually in the contracted form ‘n’t.

A. Positive statement is followed by a negative question tag.

* The books are interesting, aren't they?

* We should obey the elders, shouldn't we?

* Once the car was costly, wasn't it?

B. A negative statement is followed by a positive question tag.

* You were not listening, were you?

* Chandini hadn't seen you before, had she?

* Children shouldn't watch TV too much, should they?

C. If the sentence has no auxiliary verb

When the statement is in simple present, we form the question tag with do/does. 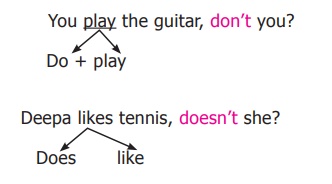 When the statement is in simple past, we form the question tag with did.

D) Statements using barely, hardly, rarely, scarcely, neither, no, nobody, none, nothing and seldom are treated as negative statement.

* He hardly works, does he?

* She rarely comes late, does she?

* They seldom speak, do they?

* Let's type sentences has the tag shall we

Let's go home, shall we?

* Affirmative Imperative has the tag will you / won't you

Read the book, will you?

* Everyone / Everybody / nobody / somebody / anybody take plural verb in tag Everyone is perfect, aren't they?

* Negative imperative has the tag will you

Don't come late tomorrow, will you?

* Nothing has the tag 'it' in the affirmative

This article is very good, isn't it?

* There is / They are have the tag isn't here - aren't there

There are some books on the table, aren't there?

a. Fill in the blanks with suitable tags.

1. She is collecting stickers, Isn’t she?

2. We often watch TV in the afternoon, don’t we?

3. You have cleaned your bike, haven’t you?

6. They are going home from school, aren’t they ?

7. Mary didn't do her homework last Monday, did she ?

b. Fill in the blanks with suitable tags.

A Simple sentence is one which has only one Subject and one Predicate.

Example:- His courage won him honour.

He must work very hard to win the first prize.

With a great effort he lifted the box.

Hearing their father's footsteps, the boys ran away.

The man, being very hungry, ate too much.

A Compound sentence is one made up of two or more Principal or Main Clauses.

Example:- The moon was bright and we could see our way.

Night came on and rain fell heavily and we all got very wet.

I shall do it now or I shall not do it at all.

He threw the stone but it missed the dog.

I both thanked him and rewarded him.

You must hurry, or you will miss the train.

Give me the book and I will read it.

I ran all the way to the station but I missed the train.

A Complex sentence consists of one Main Clause and one or more Subordinate Clauses.

Example:- They rested when evening came.

If he is at home, I shall see him.

I have found the book that I had lost.

We selected this bicycle after we had tried several times.

Once upon a time a man owned a hen which laid every day a golden egg.

The evil that men do lives after them.

A. State which of the following sentences are Compound, and which are Complex.

2. I went because I was invited. [Answer: Compound sentence]

3. Jancy returned home because she was tired. [Answer: Compound sentence]

4. Whatever you do, do well. [Answer: Complex sentence]

6. I called him, but he gave me no answer. [Answer: Compound sentence]

7. The town in which I live is very large. [Answer: Complex sentence]

9. We must eat to live, but we should not live to eat. [Answer: Compound sentence]

10. Govern your passions or they will govern you. [Answer: Compound sentence]

A. State which of the following sentences are simple, compound, complex :

1. The baby cried for food.

2. They spoke to him in Spanish, but he responded in English.

3. Hearing their cries, we came out.

4. They ate too much yesterday.

5. As we won the match, we were appreciated by the committee.

6. He was poor but helped everyone.

7. After reaching home, he rang to his friend.

8. Open the door and close the windows.

9. He was the man who met us yesterday.

10. You must hurry or you will be late to school.