The subject and verb of a sentence should be in agreement with each other. A verb agrees with the subject in number and person. A singular subject takes a singular verb and a plural subject takes a plural verb. (English Book back answers and solution for grammar questions)

The subject and verb of a sentence should be in agreement with each other.

E.g. for singular verb in a sentence

E.g. for plural verb in a sentence

1. Two or more singular subjects joined by “and” take a plural verb

E.g. You and I love music

2. When two subjects are joined by “as well as”, the verb agrees with the first subject

E.g. Her cousins as well as she are hard working

3. Either, neither, each, every and everyone are followed by a singular verb

E.g. Each of them is lovable

4. When two singular nouns refer to the same person or thing, the verb must be singular

E.g. My sister and friend has come

5. When two subjects express one idea, the verb is in the singular

6. When a plural noun expresses some specific quantity or amount considered as a whole, the verb is in singular

E.g. Thirty litres of milk is too much for payasam

7. When two or more singular subjects are connected by “with”, “together with”, “and not”, “besides”, “no less than”, the verb is in singular

E.g. He and not she is to blame

8. The verb agrees with the number of the nouns that follow the verb

E.g. There are ten students in the crowd

9. Some nouns that are plural in form but singular in meaning, take a singular verb

E.g. Tamil is my mother tongue

10. A plural noun which is in the name of a country, province, a book, is followed by a singular verb

E.g.Human values is of great importance

E.g. The whole class is attentive.

12. A relative pronoun must agree with its gender, number and person

A. Fill in the blanks appropriately

B. Fill in the blanks with the appropriate verb:

10.      Fifteen minutes is allowed to read the question paper. 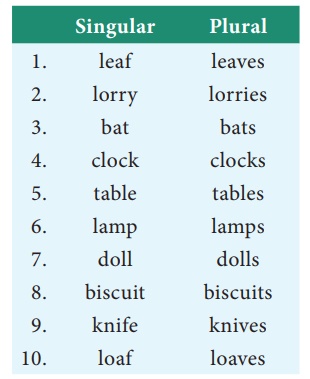 Verbs are action words. They are divided into two: Finite and Non Finites.

On the other hand, Non Finite verbs

The different kinds of Non Finites are:

Example: Pushpa eats lunch with me.

‘eats’ is a third person

2. Bare infinitives - It is a verb without ‘to’

Example: Reena will help me.

A gerund has the same form as a present participle.

Gerunds are used in the following ways.

a) Reading is a good habit.

b) Learning a language is always useful.

Her liking is cooking.

bath tub {a tub to bathe}

Participles come after an object to describe it and express the state the object is in. A present participle indicates an activity that is continuing and is in progress. A present or past participle can function as an adjective phrase to describe a noun placed before it.

Example- 1.The baby singing in the room is my child.

2. The bird flying in the sky is the lark.

The different forms of Participles are:

Participles are used as a verb  Example Sita is sleeping.

It is used as an adjective          Example She is a retired Principal.

D. Identify the non-finites in the following sentences and underline them

E. Replace the underlined words by a participle in the following sentences:

Climbing the stairs, sudha tripped and fell down

Having prayed, my grandmother went to the temple.

Being a king, he can order everybody

Having taken the last wicket, they walked back to the pavillion.

Seeing the train on the platform, he rushed.

F. Fill in the blank with the correct alternative:

4. Bravery is not picking a quarrel.