Chapter: 10th English: UNIT 2 : Prose: The Night the Ghost Got In

A, An and The are called Articles.

We use a or an with singular nouns only.

We use a with singular nouns and adjectives which begin with a consonant sound.

We use an with singular nouns and adjectives which begin with a vowel sound.

Similarly words beginning with vowel letters do not always begin with vowel sounds.

We use the when a person, an animal, a plant, a place, a thing is mentioned for a second time.

(e.g.) I bought a book this morning. I am reading the book now.

We use the when it is clear to the listener or reader which person, animal, place, or thing we are referring to.

(e.g.) The judge found him not guilty.

We use the when there is only one such thing.

We usually use the before ordinal numbers.

We use the before some proper nouns such as :

We use the before names of most buildings, landmarks, monuments and natural wonders. (e.g.) The Park Hotel, The Taj Mahal

We use the before names of places containing of

The names of places ending in plurals.

(e.g.) The Andaman and Nicobar Islands, The Netherlands.

Some proper nouns are not preceded by an article.

We use a or an only before countable nouns.

Rain can cause flooding (uncountable)

(e.g.) The rice in this super market is good. Rice is the staple food of Asians.

The word some can be used with both countable and uncountable nouns in the following ways.

I want some papers.

Nagarajan and Dhanalakshmi want to buy a new house. They have come to see a house for sale. Complete the conversation below by adding a, an or the.

Nagarajan : Well, here we are, No.8, Kaveri Street. I think this is the house we saw online. What do you think of the location?

Dhanalakshmi : It is in a nice neighbourhood. And it’s close to the railway station.

Nagarajan : And the bus stop is not too far away.

Dhanalakshmi : How many rooms are there?

Nagarajan : There are three rooms, a kitchen and a balcony.

Dhanalakshmi :  There is a lawn behin the house, right?

Nagarajan   :That’s right the lawn is actually quite large. Did you see any photos of the living room, online? What does it look like?

Dhanalakshmi : The living room looks great. It looks bright and airy. It has a nice view of the hills. But the kitchen looks a little small.

Dhanalakshmi :  No, but there is an attic, where we can store things.

Dhanalakshmi :  Lets wait for the real estate agent. She said, she would be here at three o’clock.

Nagarajan : Look there she is!

Few articles are missing in the given passage. Edit the passage given below by adding suitable articles where ever necessary.

My neighbourhood is very interesting place. My house is located in apartment building downtown near many stores and offices. There is small supermarket across street, where my family likes to go shopping. There is also post office and bank near our home. In our neighbourhood there is small, Green Park where my friends and I like to play on weekends and holidays. There is small pond near park and there are many ducks in park. We always have great time. In addition there is elementary school close to our home where my little brother studies in third grade. There are so many things to see and do in my neighbourhood that’s why I like it. It’s really great place.

Answer: My neighbourhood is a very interesting place. My house is located in an apartment building downtown near many stores and offices. There is a small supermarket across the street, where my family likes to go shopping. There is also a post office and a bank near our home. In our neighbourhood there is a small, Green Park where my friends and I like to play on weekends and holidays. There is a small pond near the park and there are many ducks in the park. We always have a great time. In addition there is an elementary school close to our home where my little brother studies in the third grade. There are so many things to see and do in my | neighbourhood that’s why I like it. It’s really a great place.

These prepositions are formed by two-word or a three- word combination such as according to, along with, at the time of, because of, owing to, instead of etc. These kinds of prepositions are used frequently in our day to day life. 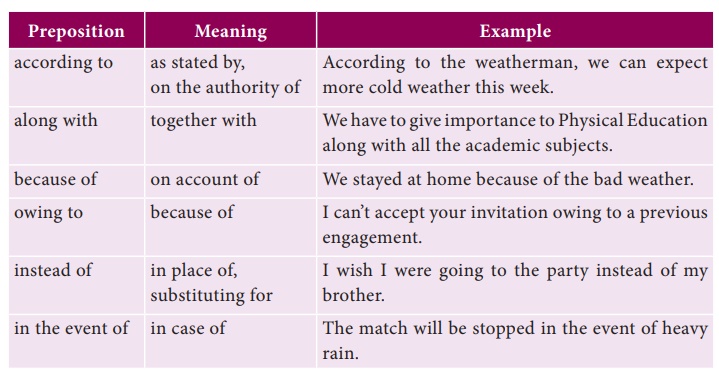 C. Refer to the dictionary to find out the meaning of the following prepositions and match them with the correct meaning. 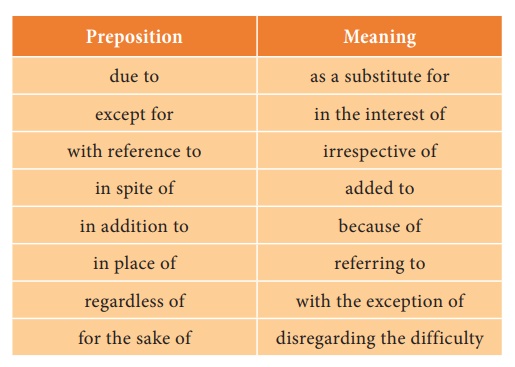 D. Fill in the blanks by choosing the most appropriate prepositional phrase from the given options.

1.    Everything falls to the ground because of earth’s gravitational pull.

a. in addition to

2.    The trial was conducted in accordance with the procedure of law.

a. in accordance with

c. in front of

5.    Failure is often the effect of negligence.

6.    Children are given toys in addition to sweets on Children’s day.

b. in addition to

7.    The parents must be informed in case of any indiscipline conduct of their wards.

c. in spite of

9.    Global warming is an effect of the green house emission.

a. an effect of

b. in spite of

c. in addition to

10. in spite of several warnings, he continued to swim.

b. in spite of

Janu is studying in class X. In the event of the teachers according to

she is a disciplined student. In addition to her poverty, she  inspite of

is always neat. Many students like her in case of  because of

her simplicity. According to her studies, she also  besides /in addition to

participates in sports. She gets on with everyone in case of regardless of/irrespective of

age and gender in the school. In opposition to taking leave, she ensures in case of

that she completes the work given before she goes to school next day.