Rocks may be broadly divided into two categories in relation to tunnelling: 1.consolidated and 2. unconsolidated or soft ground.

Rocks may be broadly divided into two categories in relation to tunnelling: 1.consolidated and 2. unconsolidated or soft ground. Only a brief accounts is given below.

It has already been mentioned that information regarding mineralogical composition, textures and structures of the rocks through which the proposed tunnel is to pass is of great importance in deciding

the method of tunneling

the strength and extent of lining and, thus the cost of the project.

Ï     In the blasting method, full face or a convenient section of the face is selected for blasting up to a pre-selected depth

Ï     These are loaded with predetermined quantities of carefully selected explosives of known strength.

Ï     The loaded or charged holes are ignited or triggered and the pre-estimated rocks get loosened as a result of the blast.

Ï     The blasting round is followed by a mucking period during which the broken rock is hauled out of the excavation so created.

supporting so that these could be left unlined and next round of blasting in the new face created is undertaken, ensuring better advance rate.

Ï     Rocks falling in this group include granites, diorites, syenites, gabbros, basalts and all the related igneous rocks, sandstones, limestones, dolomites, quartzites, arkose, greywackes and the like from sedimentary group and marbles, gneisses, quartzites, phyllites and slates from the metamorphic groups.

Ï     When any one of these rocks is stressed, such as during folding or fractured as during faulting, tunnelling in these rocks proves greatly hazardous.

Ï     Rock bursts which occur due to falling of big rock blocks from roofs or sides due to release of stresses or falling of rock block along fractures already existing in these rocks often cause many accidents.

and phyllites with high degree of cleavage and also decomposed varieties of igneous rocks.

Ï     Their excavation cost, volume for volume, might be lower than those in hard rocks.

Rocks like clays, shales, argillaceous and ferruginous sandstones, gypsum bands and cavernous limestones have to be viewed specially with great caution during tunnelling

Ï Fissured Rocks form a category in themselves and include any type of hard and soft rock that has been deformed extensively due to secondary fracturing as a result of folding, faulting and metamorphic changes of shearing type. (b)

These two quantitative properties of rocks determine the attitude (disposition in space) of the rocks and hence influence the design of excavation (tunnel) to a great extent.

Three general cases may be considered.

When encountered for small tunnels or for short lengths of long tunnels, horizontally layered rocks might be considered quite favourable.

In massive rocks, that is, when individual layers are very thick, and the tunnel diameter not very large, the situation is especially favourable because the layers would then over bridge flat excavations by acting as natural beams

But when The layers are thin or fractured, they cannot be depended upon as beams; in such cases, either the roof has to be modified to an arch type or has to be protected by giving a lining.

Sides of tunnels, however, could be left unsupported except when the rocks are precariously sheared and jointed.

Such layers that are dipping at angles up to 45 o may be said as moderately inclined.

In the first situation, that is, when the tunnel axis is parallel to the dip direction the layers offer a uniformly distributed load on the excavation.

The arch action where the rocks at the roof act as natural arch transferring the load on to sides comes into maximum play.

Even relatively weaker rocks might act as self-supporting in such cases. It is a favourable condition from this aspect. 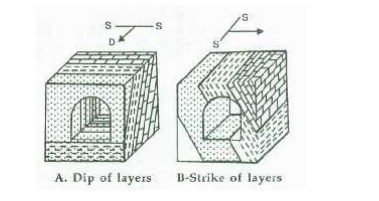 Ï    In the second case, that is, when the tunnel is driven parallel to strike of the beds (which amounts to same thing as at right angles to the dip),

Ï     the pressure distributed to the exposed layers is unsymmetrical along the periphery of the tunnel opening; one half would have bedding planes opening into the tunnel and hence offer potential planes and conditions for sliding into the opening.

Ï     The bridge action, though present in part, is weakened due to discontinuities at the bedding planes running along the arch

sides and along the roof and might necessitate remedial measures.

Ï     In the third case, when the tunnel axis is inclined to both the dip direction and the strike direction, weak points of both the above situations would be encountered.

Ï     In rock formations dipping at angles above 45 o , quite complicated situations would arise when the tunnel axis is parallel to dip or parallel to strike or inclined to both dip and strike directions.

Ï     In almost vertical rocks for example, when the tunnel axis is parallel to dip direction, the formations stand along the sides and on the roof of the tunnel as massive girders.

Ï     An apparently favourable condition, of coarse, provided all the formations are inherently sound and strong 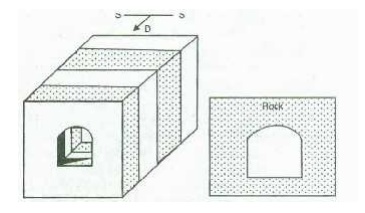