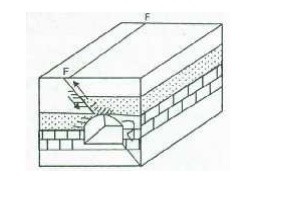 Inclined fault planes and shear zones over the roof and along the sides introduce additional complications in computation of rock pressure on the one hand and of rock strengths on the other.

This discussion leads to a general conclusion:wherever tunnel is intersected by fault planes or shear zones, it is to be considered as passing through most unsafe situations and hence designed accordingly by providing maximum support and drainage facilities.

Joints are cracks or fractures developed in rocks due to a variety of causes. although all types of joints tend to close with depth (due to load of overburden), their presence and orientation, has to be investigated.

Joints are planes of weakness and must always be suspected when the rocks are folded and faulted.

Even originally closed joints may become reactive and open up in the immediate vicinity of tunnel excavation.

Determination of ground water conditions in the region of tunnel project is not to be under-estimated at any cost.

In fact ground water level vis-ŕ -vis tunnel axis is a major factor governing computations of overhead loads on tunnels and also in the choice of method of tunnelling.

Firstly, through its physico-chemical action, it erodes and corrodes (dissolves) the susceptible constituents from among the rocks and thereby alters their original properties constantly with the passage of time.

It might have already done much of this type of job when the tunnel is excavated through such water-rich rocks.

Secondly, it effects the rock strength parameters by its static and dynamic water heads.

Such an action may become highly pronounced when an artesian acquifer is actually intercepted by tunnel excavation.