General examination of the ante-natal patients

The general examination of the ante-natal patient is embarked upon after the routine examinations have been completed.

General examination of the ante-natal patients

The general examination of the ante-natal patient is embarked upon after the routine examinations have been completed. These are as follows:

The blood pressure is checked and recorded, the weight and height are estimated and documented, the urinalysis is checked and findings are noted and recorded. Any abnormal finding is reported to the doctor and investigation of such abnormality is done and necessary treatment accorded.

Ensure patient empties her bladder, Create some privacy by screening the patient, Explain procedure to the patient, Patient removes all her clothes and underwears, she then covers up with a wrapper or a sheet, the patient lies on the couch in a dorsal position, the midwife communicates with her in an understanding language and friendly approach that promotes adequate relaxation.

Examination is done by observing the patient from head to toes =appearance, gait, posture, complexion.

The Eyes: are observed for inflammation, discharge, pallor,abnormal growth, and infection.

They are examined for: the location, the number, equality, cleanliness, abnormal discharge and abnormal contour.

The nose is observed to note the size and shape and to detect:

The lips are examined for pallor: dryness, cracks and sores.

The mouth is observed for bad breath and angular stomatities. The teeth  are  examined  for  the  shape.  dental  hygiene  or  sores,  the tongue is examined for pallor dryness, coatedness, sores

The countenance of the face is examined for puffiness which may be due to anemia, malnutrition, chronic nephritis, nephrotic syndrome, pre-exlampsia.

This is observed for previous scar. It is palpated for any growth, distended jugular veins, enlarged lymph glands

The patient now assumes a sitting up position for the examination of the breasts.

These are first inspected for Shape, size, equality, cleanliness, abnormality, changes due to pregnancy such as enlargement, pigmentation of primary areola, Montgomery tubercules, appearance of secondary areola, visible engorged veins, The nipples are examined for the shape, size,protactility.

The ducts are tested for patency by expressing the breast fluid

The breast are each palpated. Any feeling of undue lump or irregular mass should be reported to the doctor.

(a) The Diet: The type of food she should take must be rich inprotein such as eggs, beans, fish meat, melon. minerals and vitamins such as green vegetables, carrots eggs, fruits with plenty of fluids. The quality of breast milk produced will depend on the quality of good intake.

(bBreast Hygiene: She is advised to pay particular attention to breast care during bath times. The nipples should be washed with soft cloth or cotton wool and mild soap.

They are pulled out and later rolled between the thumb and index finger to get them toughened the nipples are then dried firmly with a soft towel and little oil such as kernel oil or olive oil is rubbed on them to soften them and prevent crust formation.

(c)Expression of colostrums: Colostrums is expressed from thebreasts from the 34th week of pregnancy in order to maintain the potency of the ducts and thereby preventing breast engorgement in the puerperium.

(d)Breast Support: She is educated on the need to keep thebreasts well supported with good, adjustable, firm, cotton material, wide strapped brassier which is large enough to accommodate the breasts during the progressive enlargement of the breast.

The Back: While the woman is still in a sitting up position, herback is examined for detection of – curvature of sp ine e.g. scoliosis kyphosis, abnormal swelling e.g. lymphoma, lateral protrusion of the abdomen as in case of multiple pregnancy. Sacral oedema and other abnormalities such as spinal bifida occur.

The patient is later told to lie back on the couch with the midwife assisting her, so as to examine the abdomen.

These are examined for cleanliness: Athlete’s foot and foot drop, equality of legs and toes, curvature of legs, pallor of the soles of feet, varicosity of the legs.

Each leg is lifted up the fingers of the right hand are run under the posterior aspect of the leg and thigh to confirm or exclude varicosity. Simultaneously, the vulva is viewed quickly to note. Oedema, Varicose veins, excessive and unhealthy vaginal discharge, warts, hair follicle infection, bleeding.

The patient is then interviewed if she has any undue vaginal irritation or purulent vaginal discharge.

To demonstrate the presence of oedema in the ankle, the right thumb is pressed against the pre-tibial area and quickly run over the pressed area to elicit any pitting.

The general examination is now completed and the woman dresses up. She is commended where necessary and she enquires for clarification of any existing problem.

Patients with abnormal findings are referred, All findings are recorded in the patients ante-natal notes, Routine drugs are given e.g. (haematinics and antimalaria), Appointment is given for the next visit and a thorough explanation is outlined to this effect.

Blood test – Hb estimation at booking, 28 – 32 weeks and after 36weeks before labour. More frequently if there is abnormality. PCV, FBC are also checked. Rhesus factor genotype and blood group are determined. Others are wasser man’s Khan test. VDRL, HIV.

Urinalysis: Test urine for glucose, albumin, acetone. Furtherlaboratory test may be done if there are abnormalities detected.If Rhesus positive antibody titre is checked at booking, 28, 32, 36 and before labour starts.

Vaginal Examination is done at book or at least once during pregnancy. May be done early for the following, - to diagnose pregnancy, exclude pelvic tumor, to determine gestational age before 16 weeks.

X-ray may be required to ascertain maturity Ultrasound scan

Doctor may do pelvic assessment on all primigravidae between 36-38 weeks.

2.           Let the patient lie in the supine position on the couch, with one pillow under her head. Her arms should be by her sides to prevent traction of abdominal muscles.

Inspection: note the size and shape of the abdomen

a. Size: Should correspond with the supposed period of gestation.

If much larger or smaller:-

·              Note the size of the patient. If dates are correct but uterus is large, possibilities are: multiple pregnancy, polyhydramnios, a large fetus, a fetus plus uterine fibroid.

b. Shape: Should be longitudinally ovoid. This is clear in mostprimigravidae.

Round: is due to multiparity, transverse lie, obesity,polyhydramnios.

In addition to the above, note on inspection: Pigmentation, scars, striae gravidarum, The quality of the muscles of abdomen and the contour.

c. Fetal Movement: This is evidence that the fetus is alive. It alsoaids in the diagnosis of position as the back will be on the opposite side where movement is seen.

·              To observe signs of pregnancy. To determine fundal height Size and growth of the fetus. This should correspond with the period of gestation.

·              Relationship of presenting part to the pelvis: how to palpate the uterus. Detect any deviation from normal.

The hands should be clean and warm, cold hands do not have necessary acute sense of touch and tend to induce contraction of the abdominal muscles. Arms and hands should be relaxed and the pads NOT THE TIPS of the fingers are used with delicate precision moving smoothly over the abdomen without lifting them. Erratic and sudden pressure and rough manipulation are irritating and can cause contractions making detection of fetal parts impossible.

Abdominal palpation is done by the following maneuvers: (though not by mean the order)

Using MC Donald’s technique – A measuring tape tha t has centimeter is used. After locating the fundal height, the zero end of the tape is paced on the symphysis pubic and stretched to the height of fundus. The measurement on the tape is recorded as the fundal height. It is more accurate between 20-31 weeks gestation.

Lateral Palpation: This maneuver is useful to locate thefetal back as an aid to diagnosis of position.

Method: while still facing the patient’s head or feet, thehands are placed on both sides of the uterus at about umbilical level. Pressure is applied with the palms of alternate hands to differentiate the degree of resistance between the two sides of the uterus. One hand is used to steady the uterus and press the fetus over towards the examining hand which determines the presence of the broad resistant back or the small parts that slip under the examining fingers.

By using a rotary movement of the fingers:

Pelvic palpation: This is the most important maneuver inabdominal palpation because of its value in the diagnosis of presentation of the fetus, engagement of its fetal head and disproportion between head and pelvis. It should not cause discomfort to the women.

Method: The midwife stands on the patient’s right with herthighs against the couch, her body, turned at the waist, facing towards the women’s feet. Using both hands, the midwife finds out what is in the lower pole of the uterus as follows:

The sides of the uterus, just below the umbilical level are grasped snugly between the palms of the hands, the fingers held close together, pointing downwards and inwards. What ever is in the lower pole can then be held between both hands. In most cases it is the head that is in the lower pole and is recongised as follows:

Occasionally it is the breech; which is

This method of palpating the lower pole of the uterus is most effective when the head is not engaged.

Method: The midwife, standing on the patient’s right, faces thewoman’s head and using the right hand, grasps the lower pole of

the uterus with the thumb on the woman’s right side and the fingers on the left side of the uterus. Fingers and thumb must be sufficiently far apart to accommodate the fetal head.

Engagement of the head

Engagement means when the widest diameter of the presenting part has passed through the pelvic brim. In some women engagement does not take place before term. In some African women it occurs during the first stage of labour.

The fetal heart sounds are like the ticking of a watch under a pillow. The rate may be double that of the mother’s heart beast observed at the wrist. About 140 beat per minute.

Place Pinard’s stethoscope over the back of the fetus and support with the pinna of the ear while the right hand feels maternal pulse at her wrist.

NOTE: All information obtained must be considered in making diagnosis. If any information does not correspond, repeat and think again. 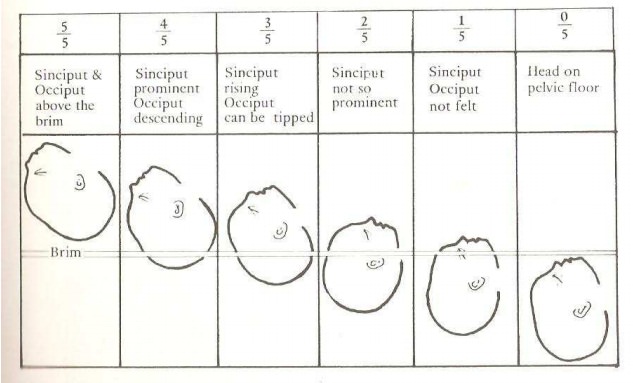 From the 36 week onwards, it is essential to assess the pelvic capacity in every pregnant woman. In a normal pelvic brim inclination of 600 the head should engage from 36 week, but in some African women with pelvic inclination of over 80 the head does not engage until labour has been in progress for some hours.

The following methods of assessments are considered

1. Sitting the patient up.

Ensure that the bladder is empty while patient lies on the couch, grasp the fetal head with the right hand as in pawlik’s grip. Rest the ulna border of the examining hand, with the 4th and last fingers on the symphysis pubis. The woman is asked to sit up without assistant and to lean forwards for a short time. Her diaphragm and abdominal muscles tend to press the fetus downwards. The thumb, index and middle fingers feel the head go through the pelvis. Any overlap (which is suggestive of cephalo – pelvic disproportion will be felt by the fingers on the symphysis pubis)

2. With the Patient Standing: Let the patient stand up with herfeet slightly apart. Face her and grasp fetal head gently. Let her lean forward slightly holding the edge of the couch with both hands. Push the head backward and downward gently. The titled pelvis makes the entry through the pelvic brim ‘direct’ in the absence of cephalo -pelvic disproportion.