General biology of the Fungi

Fungi range in form and size from unicellular yeasts to large mushrooms and puffballs. Yeasts are unicellular, do not have flagella and reproduce asexually by budding or trans-verse fission, or sexually by spore formation.

General biology of the Fungi

Fungi range in form and size from unicellular yeasts to large mushrooms and puffballs. Yeasts are unicellular, do not have flagella and reproduce asexually by budding or trans-verse fission, or sexually by spore formation. Multicellular forms such as moulds have long, branched, threadlike filaments called hyphae, which aggregate together to form a tangled mycelium (Figure 8.1a). In some fungi the hyphae have crosswalls or septa (sing: septum) separating cells, which may nevertheless be joined by one or more pores, which permit cytoplasmic streaming, a form of internal transport. Such hyphae are said to be septate; others have no crosswalls and are therefore coenocytic(i.e. many nuclei within a single plasma membrane, Figure 8.1b). 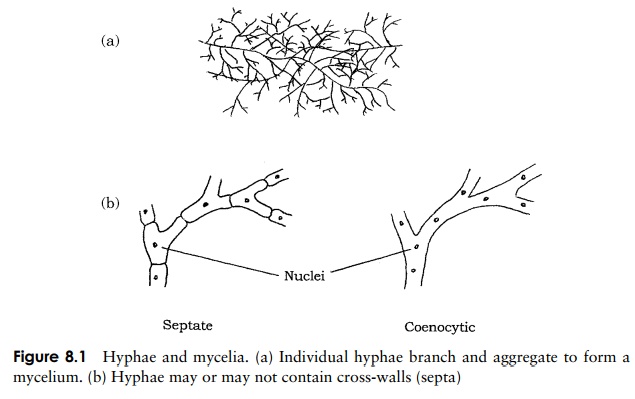 Many fungi are dimorphic, that is, they exist in two distinct forms. Some fungi that cause human infections can change from the yeast form in the human to a mycelial form in the environment in response to changes in nutrients, and environmental factors such as CO2 concentration and temperature. This change in body form is known as theYMshift; in fungi associated with plants, the shift often occurs the other way round, i.e. themycelial form exists in the plant and the yeast form in the environment.

One of the features that caused taxonomists finally to remove fungi from the plant kingdom was the distinctive chemical nature of the fungal cell wall. Whereas plant and algal cells have walls composed of cellulose, the cell wall of fungi is made up principally of chitin (Figure 3.17b), a strong but flexible polysaccharide that is also found in the exoskeleton of insects. It is a polymer whose repeating subunit is N-acetylglucosamine, a compound we encountered when discussing peptidoglycan structure.Nutrition

Most fungi are saprobic  (although some have otherThe  term  saprobe  de- modes  of  nutrition),  that  is,  they  obtain  their  nu-          scribes an organism that trients from decaying matter, which they grow over and through, frequently secreting enzymes extracellu- feeds on dead and de- larly  to  break  down  complex molecules  to  simplercaying  organic  materi- forms that can then be absorbed by the hyphae. Most als. The older term sapro- fungi  are  able  to  synthesise  their  own  amino  acidsphyte is no longer used, and proteins from carbohydrates and simple nitroge-    since the name perpet- nous compounds. Although fungi are unable to move,uates the idea of fungi they can swiftly colonise new territory as a result ofbeing plants (phyton = the rapid rate at which their hyphae grow. All energy a plant). Saprobes con- is  concentrated  on  adding  length  rather  than  thick- tribute greatly to the re- ness; this growth pattern leads to an increase in sur- cycling  of  carbon  and face area and is an adaptation to an absorptive way other elements. of life. Carbohydrates are stored mainly in the form of  glycogen  (c.f.  starch  in  higher  plants,  green  al- gae). Metabolism is generally aerobic, but some yeasts can function as facultative anaerobes.

Although, as we will see, there is a good deal of variety among the patterns of reproduc-tion among the fungi, all share in common the feature of reproducing by spores; these are non-motile reproductive cells that rely on being carried by animals or the wind for their dispersal. The hyphae that bear the spores usually project up into the air, aiding their dispersal. One of the main reasons that we have to practise aseptic techniques in the laboratory is that fungal spores are pretty well ubiquitous, and will germinate and grow if they find a suitable growth medium. Spores of the common black bread mould, Rhizopus,  have been found in the air over the North Pole, and hundreds ofmiles out to sea. In some fungi the aerial spore-bearing hyphae are developed into large complex structures called fruiting bodies. The most familiar example of a fruiting body is the mushroom. Many people think that the mushroom itself is the whole fungus but it only represents a part of it; most is buried away out of sight below the surface of the soil or rotting material, a network of nearly invisible hyphae.