Classification of the Fungi

The Fungi are arranged into four major phyla on the basis of differences in their sexual reproduction.

Classification of the Fungi

The Fungi are arranged into four major phyla on the basis of differences in their sexual reproduction. These are: 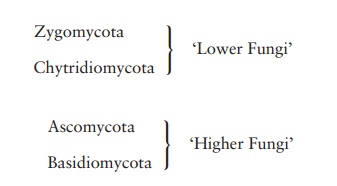 The designation ‘higher’ and ‘lower’ Fungi, is an unof-ficial distinction based on the fact that the latter two (much larger) groups possess septate hyphae. In some books, you may come across references to a group called the Deuteromycota or Fungi Imperfecti. This is not a taxonomic grouping, but a ‘holding area’ for species in which only an asexual stage has been recognised, and which cannot therefore be as-signed to any of the above groups. It is now possible, however, by means of DNA analysis, to place such species with their nearest relatives, mostly in the Ascomycota or Basidiomycota.

In the following pages, we shall look at each of the phyla in turn, concentrating particularly on their life cycles.

The Zygomycota is a relatively small phylum, comprising less than a thousand species. Its members are typically found in soil, or on decaying organic matter, including animal droppings. Some members of the group are of great importance in the formation of a mutualistic association with plant roots known as a mycorrhiza.

Members of the Zygomycota are characterised by the formation of a dormant form, the zygospore, which is resistant to unfavourable environmental conditions. Hyphae are coenocytic, with numerous haploid nuclei, but few dividing walls or septa.

Familiar examples of this group are Mucor and the black bread mould Rhizopus. The life cycle of Rhizopus is shown in Figure 8.2. Hyphae spread rapidly over the surface of the substrate (bread, fruit etc.) and penetrate it, absorbing soluble nutrients such as sugars. Upright hyphae develop, carrying at their tip sporangia, full of black haploid spores. The spores give the characteristic colour to the mould; they are the asexual reproductivestructures, and are released when the thin wall of the sporangium ruptures. When conditions are favourable, Rhizopus reproduces in this way; each spore, upon find-ing a suitable substratum for growth, is capable of germinating and initiating a new mycelium. 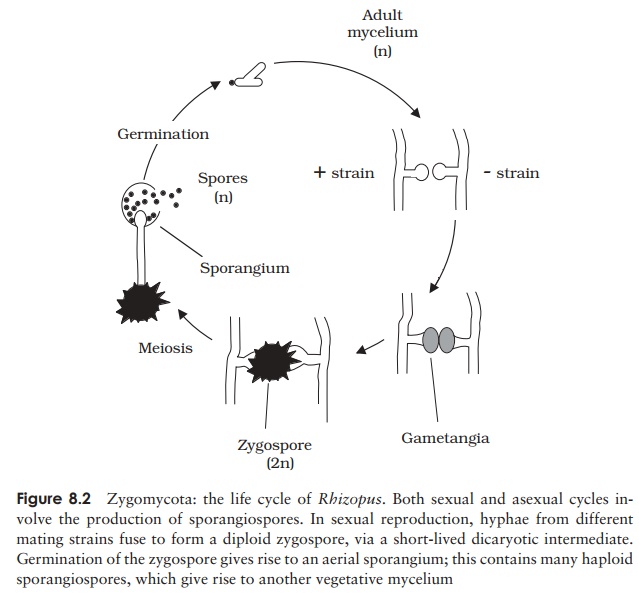 Sexual reproduction occurs when environmental con-ditions are unfavourable. Most species of Rhizopus are heterothallic; that is, there exist two distinct matingstrains known as + and −. Sexual reproduction is only possible between a member of the + -strain and a mem-ber of the − -strain. Although reproductively distinct, 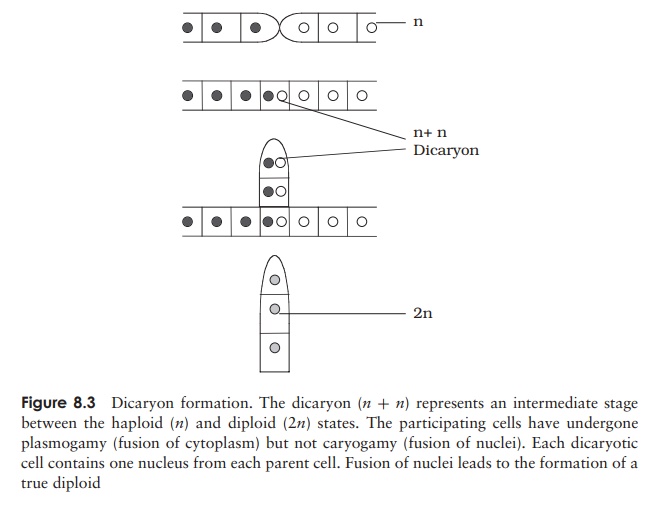 these two types are morphologically identical; because of this it is not appropriate to refer to them as ‘male’ and ‘female’. When hyphae of opposite mating types come into contact, a cross-wall develops a short distance behind each tip, and the regions thus isolated swell to produce gametangia (Figure 8.2). These fuse to form a single large multinucleate cell. Note that at this stage, the nuclei from each parent have paired up but not fused, forming a dicaryon. Dicaryon formation is found in all fungal phyla apartfrom the chytrids, and may be regarded as an intermediate stage between the haploid and diploid conditions (Figure 8.3). The proportion of the life cycle it occupies varies considerably. A thick protective covering develops around the dicaryon in Rhizopus, forming the zygospore, which can survive extremes of draught and temperature and may remain dormant for months. When conditions are favourable again, the nuclei from each strain fuse in pairs, to give a fully diploid zygote. Just before germination, meiosis occurs, then an aerial sporangiophore emerges, terminating in a sporangium. Production and dispersal of haploid spores then occur as in the asexual life cycle and a new mycelium forms when a spore germinates.

In Rhizopus, therefore, we have a life cycle in which the haploid form predominates (the zygospore is the only diploid stage), and we have sexual reproduction without the involvement of motile gametes.

The chytrids are believed to have been the first of the fungal groups to diverge from a common ancestor many millions of years ago. They differ from all other fungal groups by possessing flagellated zoospores. At one time, the Fungi were defined by their lack of flagella, so the chytrids were assigned to the Protista. However, molecular evidence, including the possession of a chitinous cell wall, suggests that it would be more appropriate to place them among the Fungi.

Some members of the chytrids may live saprobically on decaying plant and animal matter, while others are parasites of plants and algae. Another group live anaerobically in the rumen of animals such as sheep and cattle. In recent years there has been evidence that a parasitic species of chytrid is at least partially responsible for the dramatic decline in frog populations in certain parts of the world. Some chytrids are unicellular, while others form mycelia of coenocytic hyphae. Reproduction may be asexual by means of motile zoospores or sexual. The latter may involve fusion of gametes to produce a diploid zygote, but there is no dicaryotic stage in the life cycle.

The Ascomycota are characterised by the production of haploid ascospores through the meiosis of a diploid nu-cleus in a small sac called an ascus. For this reason they are sometimes called the sac fungi or cap fungi. Many of the fungi that cause serious plant diseases such as Dutch elm disease and powdery mildew belong to this group. They include some 30 000 species, among them yeasts,food spoilage moulds, brown fruit rotting fungi and truffles. Note that the latter, of-ten regarded as the most prized type of mushrooms by gourmets, are assigned to a completely different group to the true mushrooms, which belong to the Basidiomycota. Around half of ascomycote species exist in associations with algae to form lichens;. Most ascomycetes produce mycelia that su-perficially resemble those of zygomycetes, but differ in that they have distinct, albeit perforated cross walls (septa) separating each cell.

Asexual reproduction in most ascomycetes involves the production of airborne spores called conidia. These are carried on the ends of specialised hyphae calledconidiophores, where they may be pinched off as chains or clusters (Figure 8.4). Note that the conidia are not contained within sporangia; they may be naked or protected by a flask-like structure called the pycnidium. Asexual reproduction by conidia formation is a means of rapid propagation for the fungus in favourable conditions. The characteristic green, 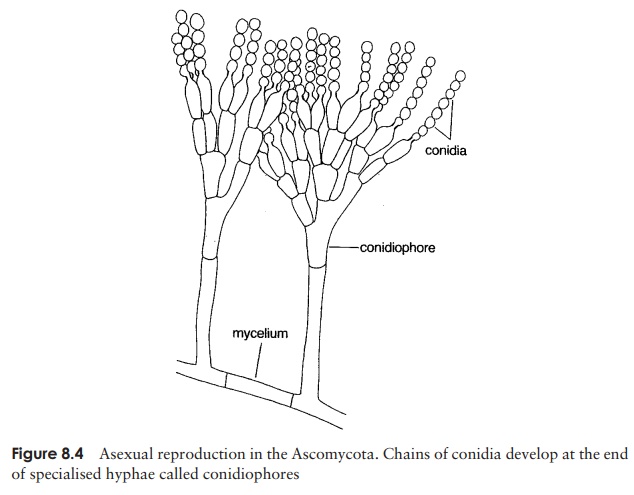 pink or brown colour of many moulds is due to the pigmentation of the conidia, which are produced in huge numbers and dispersed by air currents. The conidia germinate to form another mycelium (haploid).

In the case of the unicellular yeasts, asexual reproduction occurs as the result of budding, a pinching off of a protuberance from the cell, which eventually grows to fullsize (Figure 8.5).

Sexual reproduction in some ascomycetes involves separate + and − mating strains similar to those seen in zygomycetes, whilst in other cases an individual will be self-fertile, and thus able to mate with itself.When there are separate strains, the hyphae involved in reproduction are termed the ascogonium (− -strain) and antheridium (+ -strain). In either case, two hyphae grow together and there is a fusion of their cytoplasm (Figure 8.6). Withinthis fused structure, rather like the zygospore of Rhizopus, nuclei pair, but do not fuse; thus the resulting structure is a dicaryon. Following cytoplasmic fusion (plasmogamy), branching hyphae develop. These hyphae are septate, i.e. partitioned off into separate cells, but each cell is dicaryotic, having a nucleus from each parental type. 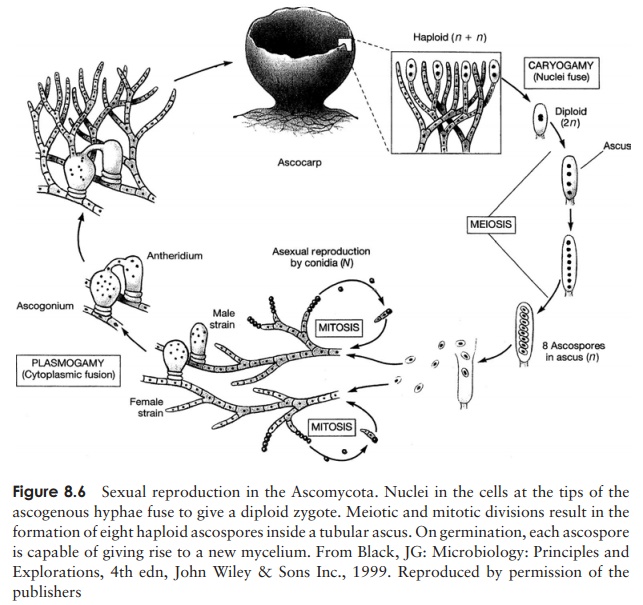 As we have seen, a key characteristic of ascomycetes is the production of sexual spores in sac-like structures called asci. These develop in distinct macroscopic fruiting bodies called ascocarps, which arise from the aggregation of dicaryotic hyphae (Figure 8.6). At the tip of each dicaryotic hypha, pairs of nuclei fuse to give a diploid zygote; this is followed by one meiotic and one mitotic division, giving rise to eight haploid ascospores. An ascocarp may contain thousands of asci, each with eight ascospores. Tetrad analysis of ascospores has proved a valuable technique in genetic mapping.

When the ascus is mature, it splits open at its tip and the ascospores are released. They are dispersed, often over long distances, by air currents. If a mature ascocarp is disturbed, it may release smoke-like puffs containing thousands of ascospores. The germinating ascospore forms a new mycelium. Frequently there are many rounds of asexual reproduction between successive rounds of sexual reproduction by ascospore production.

As with the zygomycetes, the diploid stage in ascomycetes is very brief. The life cycles of the two groups differ, however, in the greater role played by the dicaryotic form in ascomycetes.

This large group of some 25 000 species contains the true mushrooms and toadstools as well as other familiar fungi such as puffballs and bracket fungi. In fact the great majority of the fungi that we see in fields and woodlands belong to the Basidiomycota. They are of great economic importance in the breakdown of wood and other plant material. The group derives its common name of the club fungi from the way that the spore-bearing hyphae involved in reproduction are swollen at the tips, resembling clubs (the basidia: Figure 8.7).

Asexual reproduction occurs much less frequently in basidiomycetes than in the other types of fungi. When it does occur, it is generally by means of conidia, although some types are capable of fragmenting their hyphae into individual cells, each of which then acts like a spore and germinates to form a new mycelium.

Sexual reproduction in a typical mushroom involves the fusion of haploid hyphae belonging to two compatible mating types to produce a dicaryotic mycelium in which each cell has two haploid nuclei (Figure 8.8). The most striking feature of this secondary mycelium is the clamp connection; this is unique to the Basidiomycota and is a device for ensuring that as growth continues, each new cell has one nucleus from each of the parent mating strains. This dicaryotic secondary mycelium continues to grow, overwhelming any remaining haploid hyphae from the parent fungi. 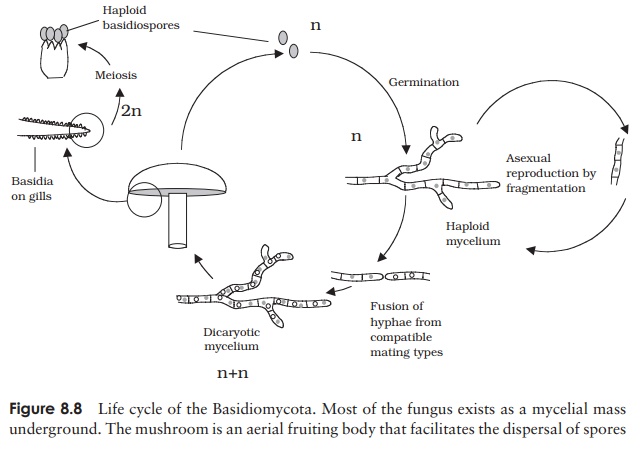 When the secondary mycelium has been developing for some time, it forms a dense compact ball or button, which pushes up just above the surface and expands into abasidiocarp; this is the mushroom itself. Stalk formation and upward growth is ex-tremely rapid; a stalk or stipe of 10 cm can be formed in only about 6–9 hours. The growth is initially towards light (positive phototropism) and then upward (negative geotropism). As the cap expands, fleshy flaps radiating from the centre of its underside open up. These are the gills, made up of compacted hyphae with numerous basidia arranged at right angles. As each basidium matures, its two nuclei finally fuse, and then undergo meiosis to produce four haploid basidiospores. A single large mushroom can produce millions of basidiospores in the space of a few days. They are discharged from the end of the basidia and then fall by gravity from the gills. Air currents then carry them away for dispersal. Upon finding a suitable substratum, the spores germinate into a haploid mycelium just below the surface of the soil, thus completing the life cycle.