The autonomic nervous system is activated mainly by centers located in the spinal cord, brain stem, and hypothalamus.

The autonomic nervous system is activated mainly by centers located in the spinal cord, brain stem, and hypothalamus. Also, portions of the cerebral cortex,especially of the limbic cortex, can transmit signals to the lower centers and in this way influence autonomic control.

Figure 60â€“1 shows the general organization of the peripheral portions of the sym-pathetic nervous system. Shown specifically in the figure are (1) one of the two paravertebral sympathetic chains of ganglia that are interconnected with the spinalnerves on the side of the vertebral column, (2) twoprevertebral ganglia (the celiac and hypogastric), and (3) nerves extending from the ganglia to the different inter-nal organs. 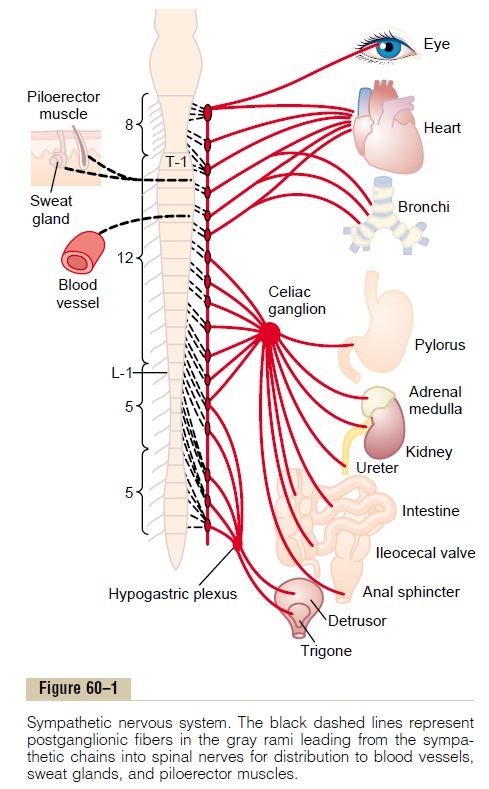 The sympathetic nerves are different from skeletal motor nerves in the following way: Each sympathetic pathway from the cord to the stimulated tissue is composed 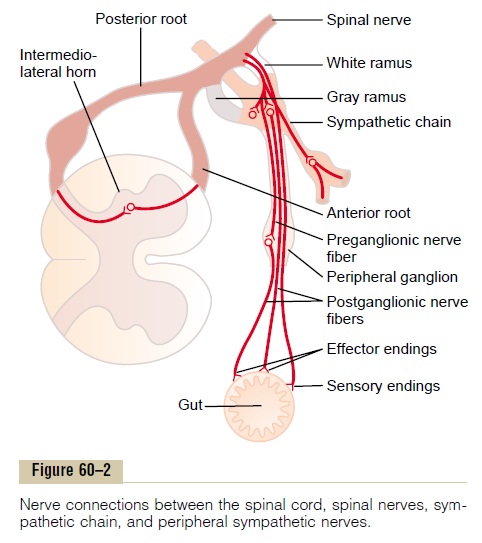 of two neurons, a preganglionic neuron and a postgan-glionic neuron, in contrast to only a single neuron in theskeletal motor pathway. The cell body of each pregan-glionic neuron lies in the intermediolateral horn of the spinal cord; its fiber passes, as shown in Figure 60â€“2, through an anterior rootof the cord into the corre-sponding spinal nerve.

Sympathetic Nerve Fibers in the Skeletal Nerves. Some of thepostganglionic fibers pass back from the sympathetic chain into the spinal nerves through gray rami at all levels of the cord, as shown in Figure 60â€“2. These sym-pathetic fibers are all very small type C fibers, and they extend to all parts of the body by way of the skeletal nerves. They control the blood vessels, sweat glands, and piloerector muscles of the hairs. About 8 per cent of the fibers in the average skeletal nerve are sympathetic fibers, a fact that indicates their great importance.

Segmental Distribution of the Sympathetic Nerve Fibers. Thesympathetic pathways that originate in the different segments of the spinal cord are not necessarily distrib-uted to the same part of the body as the somatic spinal nerve fibers from the same segments. Instead, the sym-pathetic fibers from cord segment T-1 generally pass up the sympathetic chain to terminate in the head; from T-2 to terminate in the neck; from T-3, T-4, T-5, and T-6 into the thorax; from T-7, T-8, T-9, T-10, and T-11 into the abdomen; and from T-12, L-1, and L-2 into the legs.

This distribution is only approximate and overlaps greatly.

The distribution of sympathetic nerves to each organ is determined partly by the locus in the embryo from which the organ originated. For instance, the heart receives many sympathetic nerve fibers from the neck portion of the sympathetic chain because the heart orig-inated in the neck of the embryo before translocating into the thorax. Likewise, the abdominal organs receive most of their sympathetic innervation from the lower thoracic spinal cord segments because most of the prim-itive gut originated in this area.

Special Nature of the Sympathetic Nerve Endings in the Adrenal Medullae. Preganglionic sympathetic nerve fibers pass,without synapsing, all the way from the intermedio-lateral horn cells of the spinal cord, through the sympathetic chains, then through the splanchnic nerves, and finally into the two adrenal medullae. There they end directly on modified neuronal cells that secrete epi-nephrine and norepinephrine into the blood stream.These secretory cells embryologically are derived from nervous tissue and are actually themselves postgan-glionic neurons; indeed, they even have rudimentary nerve fibers, and it is the endings of these fibers that secrete the adrenal hormones epinephrine and norepinephrine. 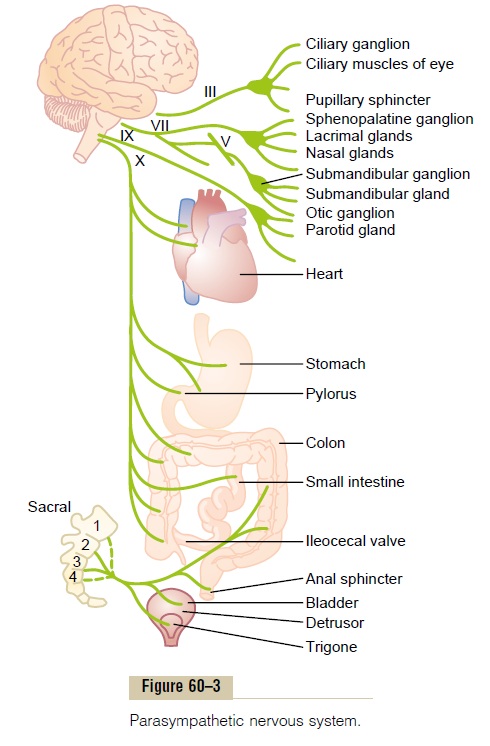 The sacral parasympathetic fibers are in the pelvicnerves, which pass through the spinal nerve sacralplexus on each side of the cord at the S-2 and S-3 levels. These fibers then distribute to the descending colon, rectum, urinary bladder, and lower portions of the ureters. Also, this sacral group of parasympathetics sup-plies nerve signals to the external genitalia to cause erection.