Oxygen enters the blood at the respiratory surfaces and is transported via the circulatory system to tissues and released .

Oxygen enters the blood at the respiratory surfaces and is transported via the circulatory system to tissues and released(see Cardiovascular system). Some oxygen simply is dissolved in the blood plasma. This is not enough, however, to support the level of the metabolism of most large organisms, except in some Antarctic icefishes (Channichthyidae). The red blood cells of most fishes and other vertebrates contain hemoglobin, an oxygen-carrying protein that increases the overall capacity of the blood to transport oxygen. Each hemoglobin molecule has four subunits, each of which can bind a single molecule of oxygen. The packaging of hemoglobin within red blood cells permits intracellular biochemistry to optimize thebinding and releasing of oxygen without affecting molecules carried in the plasma or in other cells in the bloodstream.

For hemoglobin to work well as an oxygen-transporting protein it must alter its oxygen-binding ability so that it can bind oxygen at the respiratory surface and release it at the tissues elsewhere in the body. Like many proteins, hemoglobin’s sensitive to the physical and chemical conditions of its environment, such as temperature and pH. At the tissues, blood pH tends to be lowered by the presence of carbon dioxide because it combines with water to form carbonic acid (H2CO3). At the respiratory surfaces, however, carbon dioxide is released to the environment, thereby decreasing the level of carbonic acid in the blood and raising the pH. Hemoglobin’s structure is affected by the changing pH conditions such that it has a higher affinity for oxygen (can bind more easily) at higher pH but has a lower affinity when pH decreases (Fig. 5.5A). This phenomenon, known as the Bohr effect, is caused by changes in the structure of the hemoglobin subunits that alter oxygen’s

access to the binding sites. In some cases, the structure of hemoglobin can become altered so much that oxygen cannot bind to all potential binding sites and the total capacity of the blood to carry oxygen is decreased (the Root effect, Fig. 5.5B). These phenomena become very important in understanding the function of the teleost gas bladder, discussed later. 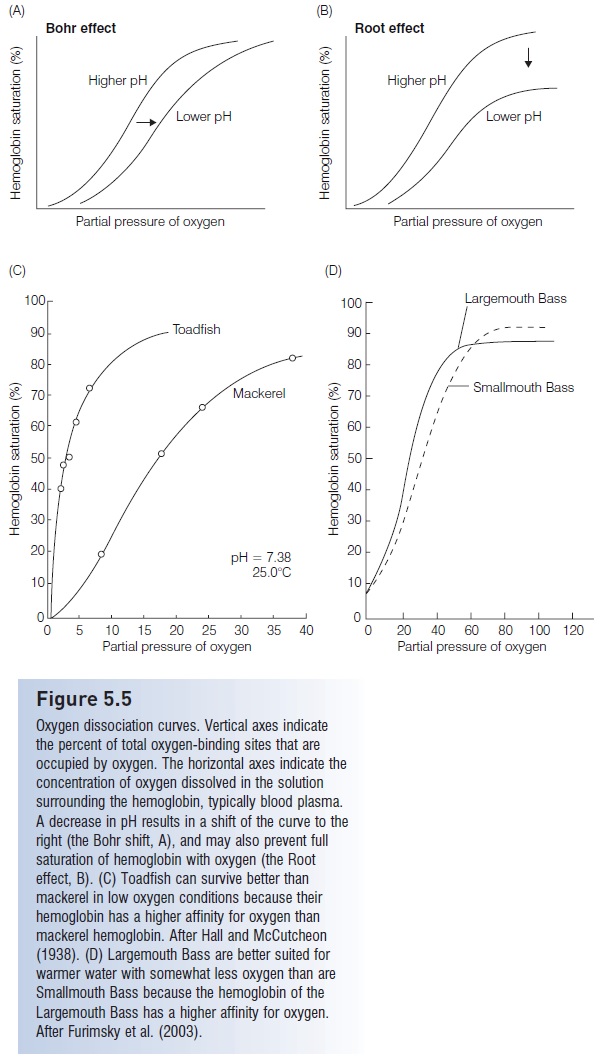 Oxygen dissociation curves. Vertical axes indicate the percent of total oxygen-binding sites that are occupied by oxygen. The horizontal axes indicate the concentration of oxygen dissolved in the solution surrounding the hemoglobin, typically blood plasma. A decrease in pH results in a shift of the curve to the right (the Bohr shift, A), and may also prevent full saturation of hemoglobin with oxygen (the Root effect, B). (C) Toadfish can survive better than mackerel in low oxygen conditions because their hemoglobin has a higher affinity for oxygen than mackerel hemoglobin. After Hall and McCutcheon (1938). (D) Largemouth Bass are better suited for warmer water with somewhat less oxygen than are Smallmouth Bass because the hemoglobin of the Largemouth Bass has a higher affinity for oxygen.

Hemoglobin can be affected by changes in temperature also, with affinity for oxygen decreasing as temperatureincreases. This is one reason why cold water fishes often cannot survive at higher temperatures, even if the oxygen content of the water is increased. At these higher temperatures, the structure of the fish’s hemoglobin may be altered to the point where the fish simply cannot pick up enough oxygen at its gills, and could therefore suffocate even though sufficient oxygen was present in the water. The blood of acoelacanth, for example, has its highest affinity for oxygen at 15°C, and the fish suffers from hypoxic stress at temperatures above 25°C (see Fricke & Hissmann 2000).

Hemoglobin’s of different fish species may have different affinities for oxygen. For example, the higher affinity of toadfish hemoglobin makes it better adapted for low oxygen environments. Mackerel (Scombridae), however, require more oxygen in their environment for their hemoglobin to become saturated enough to support their active lifestyle (Hall & McCutcheon 1938) (Fig. 5.5C). The higher affinity for oxygen of hemoglobin of the Largemouth Bass (Micropterussalmoides, Centrarchidae) makes this species better adapted to somewhat warmer, lower oxygen environments, and less sensitive to hypoxia than its close relative the Smallmouth Bass (M. dolomieu; Furimsky et al. 2003)(Fig. 5.5D). Different fish hemoglobin’s also may show different temperature sensitivities. Antarctic fishes (Nototheniidae) possesshemoglobin’s that are effective at temperatures well below the effective temperature range of hemoglobin of temperate fishes (Hochachka & Somero 1973). Thehemoglobins of the warm-bodied tunas and lamnid sharks are less sensitive to temperature changes than are hemoglobin of many other species. This is adaptive because blood temperatures in these fishes may increase as much as10°C or more as blood travels from the gills to the warm swimming muscles. If the hemoglobin’swere not thermally stable, arterial blood might unload its oxygen as it warmed in the countercurrent heat exchanger, resulting in loss of oxygen to venous blood and depriving the highly active swimming muscles that need the oxygen most (Hochachka & Somero 1984).

Some fishes, such as trout’s (Salmonidae) and suckers (Catostomidae) have more than one type of hemoglobin. The different hemoglobin’s exhibit different degrees of sensitivity to decreased pH, therefore providing a “backup” system to ensure some oxygen transport even if bloodpH drops considerably. If all of the hemoglobin’s were sensitive to the Bohr effect, a substantial drop in blood pH, perhaps due to a burst of swimming activity, might inhibit oxygen loading at the gills (Brunori 1975; Hochachka &Somero 1984).

In addition to transporting oxygen, the blood must pick up the carbon dioxide that is produced in cellular metabolism and transport it back to the gills for release to the environment. If excess carbon dioxide is not removed, blood and tissue pH will drop and interfere with normal metabolic processes. Because of this link between carbon dioxide levels and pH, the transport of carbon dioxide and oxygen are linked. 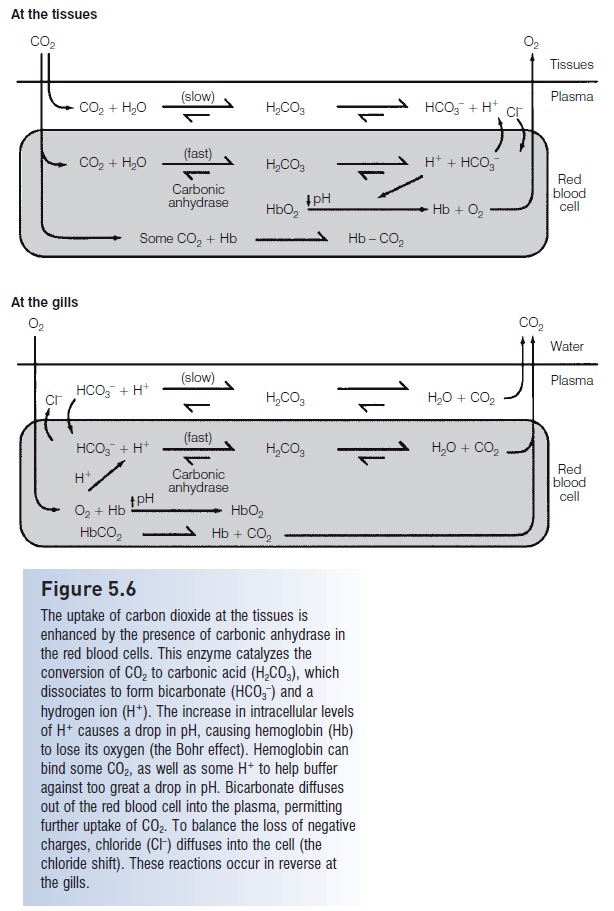 The uptake of carbon dioxide at the tissues is enhanced by the presence of carbonic anhydrase in the red blood cells. This enzyme catalyzes the conversion of CO2 to carbonic acid (H2CO3), which dissociates to form bicarbonate (HCO3–) and a hydrogen ion (H+). The increase in intracellular levels of H+ causes a drop in pH, causing hemoglobin (Hb) to lose its oxygen (the Bohr effect). Hemoglobin can bind some CO2, as well as some H+ to help buffer against too great a drop in ph. Bicarbonate diffuses out of the red blood cell into the plasma, permitting further uptake of CO2. To balance the loss of negative charges, chloride (Cl–) diffuses into the cell (the chloride shift). These reactions occur in reverse at the gills.

The dissociating carbonic acid also causes the concentration of bicarbonate (HCO3–) inside the red blood cell to increase. Much of this HCO3– diffuses across the membrane of the red blood cell and into the plasma, keeping intracellular HCO3– levels from getting so high that they would inhibit further carbon dioxide uptake. In response to this loss of negative ions from inside the cell, chloride (Cl–)from the plasma diffuses into the red blood cell, thereby balancing the distribution of charges (Cameron 1978). The net result of all of these reactions is that the blood has taken up carbon dioxide and become slightly acidified, oxygen has been released from hemoglobin, the hemoglobin molecule itself has helped buffer against too much of a pH drop by taking up some carbon dioxide and H+, and the bicarbonate level in the plasma has increased.

When blood gets to the respiratory surface where carbon dioxide levels are low and oxygen levels are high, these reactions occur in the opposite direction, resulting in the release of carbon dioxide, a slight increase in blood pH,and the binding of oxygen to hemoglobin within the red blood cells.