At least 370 extant species of fishes in 49 families have some capacity to obtain oxygen from the air, and the numbers are likely to increase with further study. .

At least 370 extant species of fishes in 49 families have some capacity to obtain oxygen from the air, and the numbers are likely to increase with further study (Graham1997a; Graham & Lee 2004) (Table 5.1). Most air-breathing fishes remain in water all of the time (aquatic airbreathers). Among these some only supplement gill respiration when necessary (facultative air breathing), whereas others must have access to air or they will drown (obligate air breathing). Although there are some temperate airbreathingfishes, such as the Bowfin (Amia), gars (Lepisosteus),mud minnow (Umbra), and Tarpon (Megalops), most live in tropical habitats where high temperatures dramatically reduce dissolved oxygen levels in water. Many of these tropical air-breathing fishes live in freshwater habitats in which high rates of decomposition further decrease the amount of oxygen available and a thick forest canopy inhibits aquatic photosynthesis, which would add some oxygen to the water. 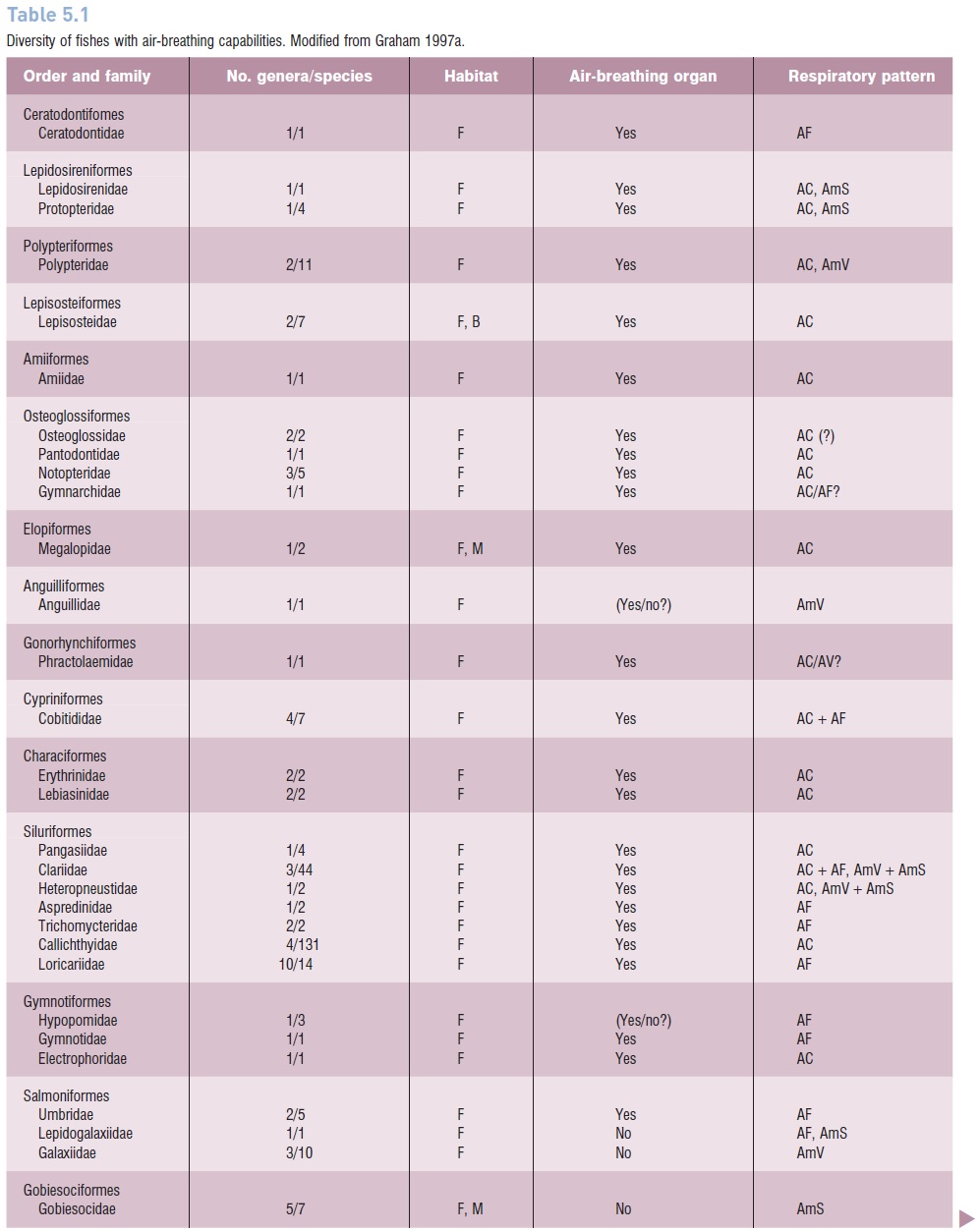 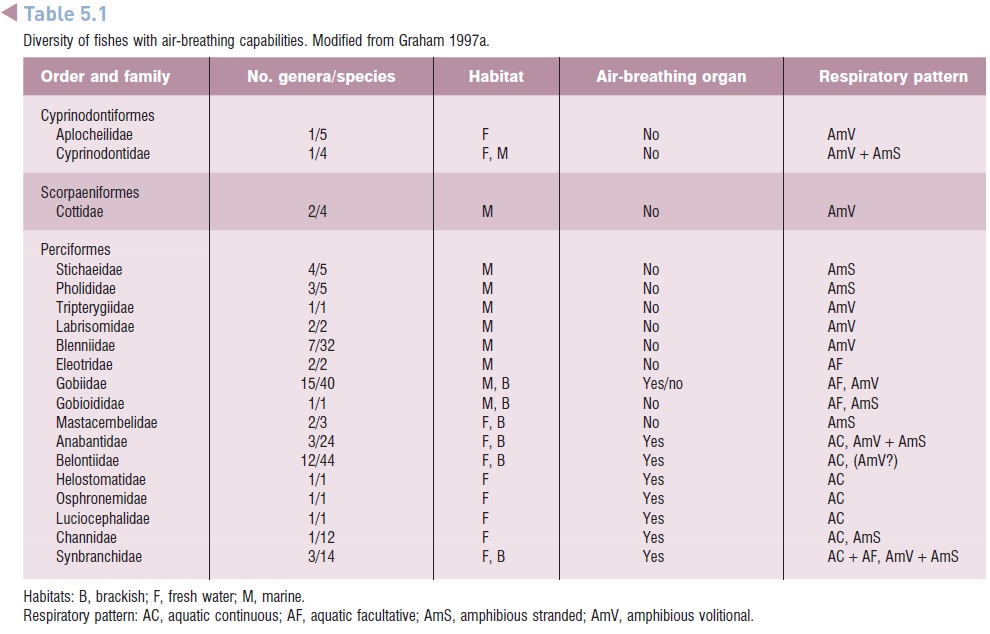 Diversity of fishes with air-breathing capabilities.Modified from Graham 1997a.

Some fishes also have the ability to survive, and even remain active, while out of the water due to their ability to breathe air (amphibious air breathers). These include some tropical freshwater species in habitats that may become dry seasonally (providing additional selective pressure for aerial respiration) and marine intertidal species that leave the water to forage. Air breathing in these fishes is not a mechanism to survive low oxygen in the water, but instead provides a means to take advantage of a habitat not available to other fishes.

Air breathing evolved among fishes over 400 million years ago, and at least some members of extinct groups suchas the placoderms and acanthodians may have been air breathers (Graham 1997a). Early sarcopterygians gave rise to early tetrapod’s, which have since successfully colonized terrestrial habitats. But long after the tetrapod’s began their invasion of the land, air breathing continued to develop independently in many other groups of fishes. Although the high salinity and temperatures of tropical oceans could create low oxygen levels and lead to the origins of air breathing, it is more likely that tropical freshwater habitats with persistent low oxygen and periodic drying provided the long-term evolutionary pressure to drive this adaptation(Graham & Lee 2004). Air-breathing organs of fishes today fall into three broad categories: (i) those that are derived from the gut, such as the lungs, gas bladder, stomach, or intestine; (ii) structures of the head and pharynx, such as modifications of the gills, mouth, pharynx, or opercles; and(iii) skin, which can be very effective for gas exchange if itis well vascularized and kept moist.

An analysis of the relationships among the known airbreathing fishes led Graham (1997a) to conclude that air breathing probably evolved independently at least 38 times, and quite possibly over 65 times. Air-breathing fishes are found in 18 orders, 49 families, and in freshwater, brackish, and marine ecosystems (Graham 1997a). Most are aquatic air breathers, including those that continuously breathe air and those that only do so occasionally, but some are amphibious species that regularly breathe air during seasonal aestivation, occasional stranding’s, or intentional excursions onto land. Air-breathing fishes show great diversity in size, from as small as 3 cm up to some that may exceed 2 m, including Arapaima gigas, one of the largest freshwater fishes in the world.

Despite the great diversity of air-breathing fishes, 39%of known species are found in just seven families (Graham1997a) – the Callichthyidae and Clariidae (both in the order Siluriformes), and the five families of anabantoids (inthe order Perciformes). Among the anabantoids, changes inthe jaws and branchial region that allow for air breathing also provide enhanced capabilities for sound reception and production, bubble-nest construction, and mouth brooding. There also is evidence of evolutionary regression as members of the anabantoid genus Sandelia have less well-developed air-breathing organs than other members of their highly specialized family who are obligatory air breathers. This regression may be due to radiation of members of an ancestral group into habitats with more oxygen available (Graham 1997a).

Two main factors probably have driven the evolution of air breathing: (i) persistent or occasional low oxygen levelsin freshwater habitats; and (ii) emergence during low tides among littoral and intertidal marine and brackish water habitats (Graham 1997a). In both habitats, the ability to make excursions onto land provides access to resources that on air breathers cannot reach.

Lungs were present in many primitive fishes, and became more specialized and efficient among the sarcopterygiansas they evolved and one lineage became the modern tetrapod’s. As the actinopterygians evolved and became more advanced, the lung lost its respiratory function and became the gas bladder, which functions for buoyancy control and, in some fishes, enhances hearing (see  Hearing).Subsequently, some of the more advanced fishes developedalternative mechanisms to once again take advantage of the oxygen available in air.

Freshwater air-breathing fishes show a wide array of adaptations for aerial gas exchange. Gills are not well suitedfor aerial respiration because they collapse and stick together when not supported by the buoyancy of water. There are, however, a few fishes that have modified gill structures that assist with aerial respiration, such as the modified treelike branches found above gill arches two and four of the Walking Catfish (Clariidae) or the complex plate likeoutgrowths of the gill arches of anabantoids such as the Giant Gourami (Osphronemidae) and several other Asian perciforms(Fig. 5.4). Other respiratory structures include highly vascularized surfaces such as the skin, mouth, and opercula cavity, or modifications of the gut, such as the stomach, intestine, modified gas bladder, or lungs. Gas bladders of most fishes are not well vascularized except in the regions designed for gas deposition or removal, but several air breathers have highly vascularized and subdivided gas bladders designed for gas exchange. These include the very large South Americanosteoglossiform Arapaima (Osteoglossidae), as well as the North American Bowfin (Amiidae) and gars (Lepisosteidae).The gills of these aquatic air breathers are still important for getting rid of metabolic wastes, such as carbon dioxide and ammonia, and for regulating ionic and acid–base balance. 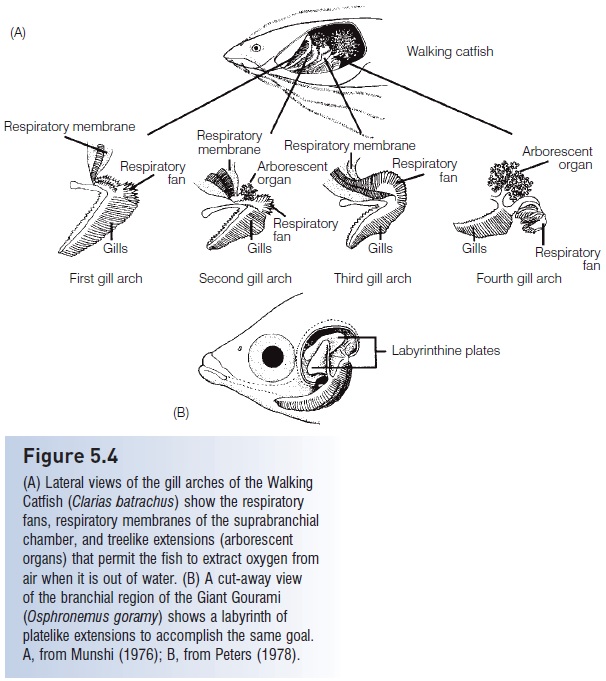 (A) Lateral views of the gill arches of the Walking Catfish (Clarias batrachus) show the respiratory fans, respiratory membranes of the suprabranchialchamber, and treelike extensions (arborescent organs) that permit the fish to extract oxygen from air when it is out of water. (B) A cut-away view of the branchial region of the Giant Gourami(Osphronemus goramy) shows a labyrinth ofplate like extensions to accomplish the same goal. A, from Munshi (1976); B, from Peters (1978).

The lungfishes (Dipnoi) have true lungs. The Australian Lungfish (Ceratodontidae) is a facultative air breather witha single lung, whereas the African and South American lungfishes (Protopteridae and Lepidosirenidae, respectively)are both obligate air breathers with bilobed lungs (see Subclass Dipnoi, Order Ceratodontiformes:the lungfishes). The gills of the South American Lungfish(Lepidosiren paradoxa) are of so little value for gas or ion exchange that the respiratory physiology of this species is more similar to that of an amphibian than to most otherfishes (de Moraes et al. 2005).

A strong reliance on air breathing among some freshwater fishes aids survival in oxygen-poor habitats, but it also helps some cope with drought. When rivers and ponds dry up, African lungfishes burrow into the sediment, dramatically slow their metabolism, and can remain in this torpid state for years. When the rains return and water levels rise, they leave their mud cocoons and become active. When the Walking Catfish is confronted with drought conditions, it “walks away” to find another pond, using a side-to-side lurching action supported by its stout pectoral spines.

Many intertidal fishes also demonstrate some air breathingcapability, so this should not be seen as an anomaly but rather a part of the broad range of capabilities of fishes in this extreme habitat. Oxygen can become limited in tide pools due to increasing temperature and salinity and the ongoing respiration of animals and plants. Most marine air-breathing fishes evolved from relatively advanced fishes, so they do not have lungs and instead rely onmodification of existing aquatic breathing structures such as gills and skin (Martin & Bridges 1999). Gills often are modified with structural support to prevent collapsing in air, and the skin often is well vascularized, has few scales, and is kept moist. Zhang et al. (2003b)provideevidence that mudskippers (Periopthalmidae) rely on cutaneous respiration to support their amphibious lifestyle. Some emergent intertidal species decrease their oxygen consumption rate by using anaerobic respiration to support activity,

whereas other species simply reduce their activity until the next high tide (Martin & Bridges 1999). Although most marine air-breathing fishes are emergent or amphibious and rely on their skin for respiration while in air, notable exceptions include the Long jawMud sucker (Gillichthysmirabilis), which has a highly vascularized mouth and pharynx (Martin & Bridges 1999), and the PacificTarpon(Megalops cyprinoides), which uses its gas bladder to augment respiration when oxygen levels in the water are low (Seymour et al. 2004).

Although aquatic air breathers rely on gills for the release of carbon dioxide, ion regulation, and nitrogen excretion,the capability of some air-breathing fishes to tolerate extended periods of low oxygen availability, and in some cases aestivation, would require some biochemical means of either preventing or tolerating low blood pH (due to elevated carbon dioxide) and elevated levels of nitrogen wastes. Ip et al. (2004a) found several different adaptations for protecting against ammonia toxicity among five tropical air-breathing fishes, with most fish utilizing at least two mechanisms. These included reducing ammonia production by reducing amino acid catabolism, converting ammonia toless toxic compounds such as urea or glutamine, excreting ammonia through the skin or digestive tract by increased volatilization, and increasing tolerance to ammonia at the cellular and subcellular level. Slender Lungfish (Protopterusdolloi) apparently convert ammonia to urea when exposed to air for 21–30 days (Wood et al. 2005). The Swamp Eel (Monopterus alba) converted ammonia to glutamine when exposed to air for 6 days, but suppressed ammonia production during aestivation in mud for 6 or 40 days (Chewet al. 2005). However, the African Sharp toothCatfish (Clarias gariepinus) survived 4 days of air exposure by tolerating very high levels ammonia in its tissues (Ip et al.2005). When exposed to elevated ammonia levels, the Giant Mudskipper (Periopthalmodon schlosseri) increased levels of cholesterol and saturated fatty acids in its skin, thereby decreasing skin permeability (Randall et al. 2004).In addition, exposure to the low oxygen or high sulfidefound on mudflats induces an enzyme system in some mudskippers to detoxify the sulfur (Ip et al. 2004b). There is still much more to learn about the physiological specializations of these amphibious fishes.

Because some air-breathing fishes can tolerate low oxygen levels and poor water quality, they are good species for high-density, low-maintenance aquaculture in warm climates (Graham 1997a). Understanding more about their physiology, therefore, would not only be intellectuallyinteresting, but also has the potential of being economically valuable.