Frequency Shit Keying (FSK) modulation is a popular form of digital modulation used in low-cost application for transmitting data at moderator or low rate over wired as well as wireless channels.

The binary scheme uses two carriers and for special relationship between the two frequencies one can also define two orthonormal basis functions as shown below.

A binary FSK Transmitter is as shown, the incoming binary data sequence is applied to on-off level encoder. The output of encoder is √   volts for symbol 1 and 0 volts for symbol “0‟. When we have symbol 1 the upper channel is switched on with oscillator frequency f1, for symbol “0‟, because of inverter the lower channel is switched on with oscillator frequency f2. These two frequencies are combined using an adder circuit and then transmitted. The transmitted signal is nothing but required BFSK signal. The detector consists of two correlators. The incoming noisy BFSK signal x(t) is common to both correlator. The Coherent reference signal ᶲ1(t)&ᶲ2(t) are supplied to upper and lower correlators respectively.

The correlator outputs are then subtracted one from the other and resulting a random vector “l” (l=x1 - x2). The output “l” is compared with threshold of zero volts.

l > 0, the receiver decides in favour of symbol 1.

l< 0, the receiver decides in favour of symbol 0.

• Not susceptible to noise as much as ASK 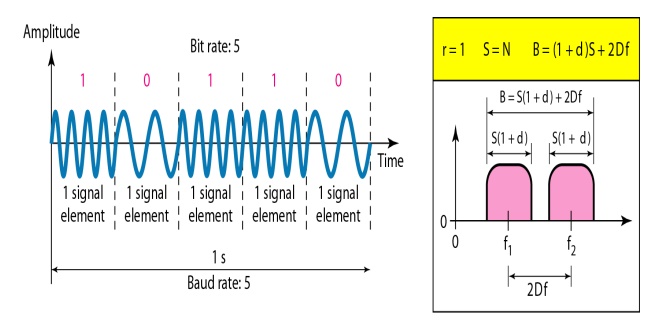 – used at higher frequencies on LANs that use coaxial cable. 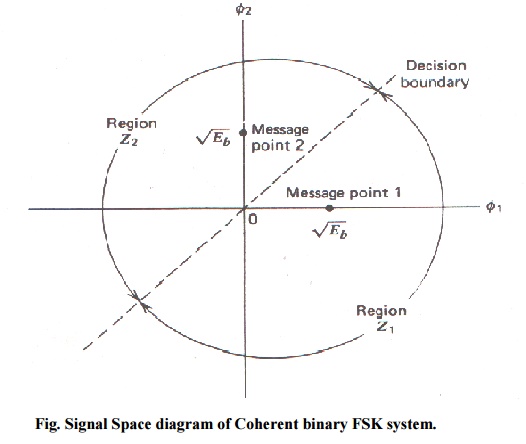