Free and Forced Convection During External Flow Over Plates

Dimensionless Parameters and their Significance: The following dimensionless parameters are significent in evaluating the convection heat transfer coefficient:

FREE AND FORCED CONVECTION DURING EXTERNAL FLOW OVER PLATES

Dimensionless Parameters and their Significance

The following dimensionless parameters are significent in evaluating the convection heat transfer coefficient:

(a) The Nusselt Number (Nu)-It is a dimensionless quantity defined as hL/ k, where h = convective heat transfer coefficient, L is the characteristic length and k is the thermal conductivity of the fluid The Nusselt number could be interpreted physically as the ratio of the temperature gradient in the fluid immediately in contact with the surface to a reference temperature gradient (Ts - T inf) /L. The convective heat transfer coefficient can easily be obtained if the Nusselt number, the thermal conductivity of the fluid in that temperature range and the characteristic dimension of the object is known.

inf< Tw). The temperature distribution is shown ill Fig. 2.4. Newton's Law of Cooling says that the rate of heat transfer per unit area by convection is given by 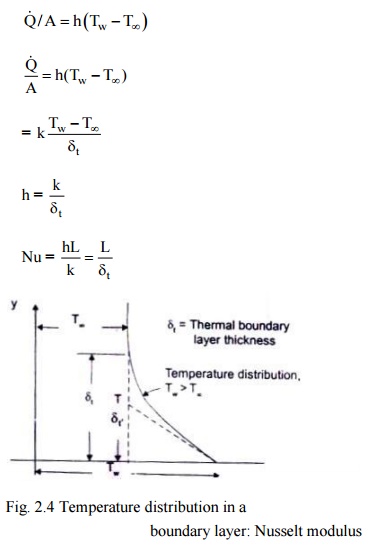 The heat transfer by convection involves conduction and mixing motion of fluid particles. At the solid fluid interface (y = 0), the heat flows by conduction only, and is given by

Since the magnitude of the temperature gradient in the fluid will remain the same, irrespective of the reference temperature, we can write dT = d(T - Tw) and by introducing a characteristic length dimension L to indicate the geometry of the object from which the heat flows, we get

(b) The Grashof Number (Gr)-In natural or free convection heat transfer, die motion of fluid particles is created due to buoyancy effects. The driving force for fluid motion is the body force arising from the temperature gradient. If a body with a constant wall temperature Tw is exposed to a qui scent ambient fluid at T inf , the force per unit volume can be written as

the acceleration due to gravity. 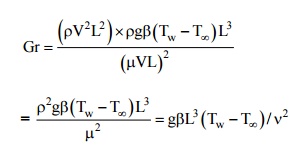 where mis the dynamic viscosity of the fluid, v = kinematic viscosity and a = thermal diffusivity.