The age of the embryo or foetus (fig 4.1) is important in determining for example criminal abortion, viability and maturity. 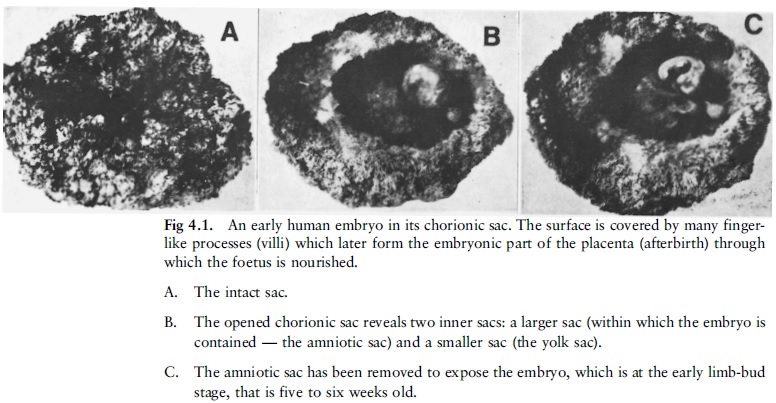 The limb buds appear at about the fifth week and before then it is impossible to assess the age accurately without making special studies. At eight weeks the embryo measures about 25 mm, and a hand lens is required to examine it at this or at slightly earlier stages. The approximate lengths and also the appearance of the embryo at the stages of five, six, seven and eight weeks are shown in fig 4.2. The period of the seventh to the eighth week marks the transition from embryo to foetus. 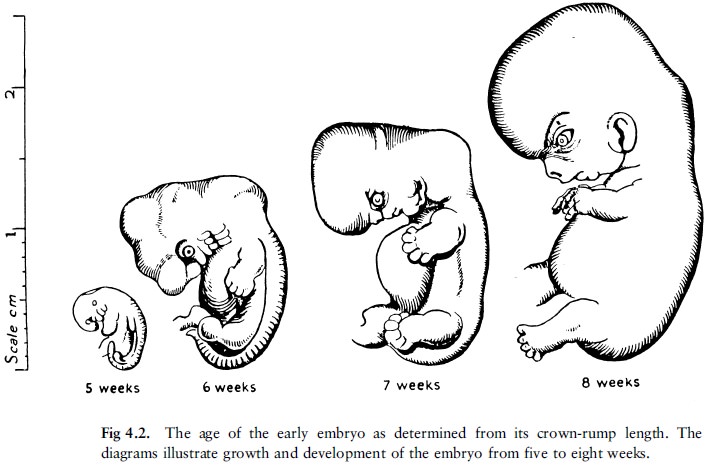 In measuring the embryo or foetus one usually gives the crown-rump length, that is the distance from the top of the head (the vertex) to the buttocks.

After the eighth week the foetus grows rapidly and its length is the best guide to its age; for practical purposes one gives the age in calendar months rather than in weeks. The signs by which the age of the foetus between the third month and full term can be assessed are set out in table 4.1. 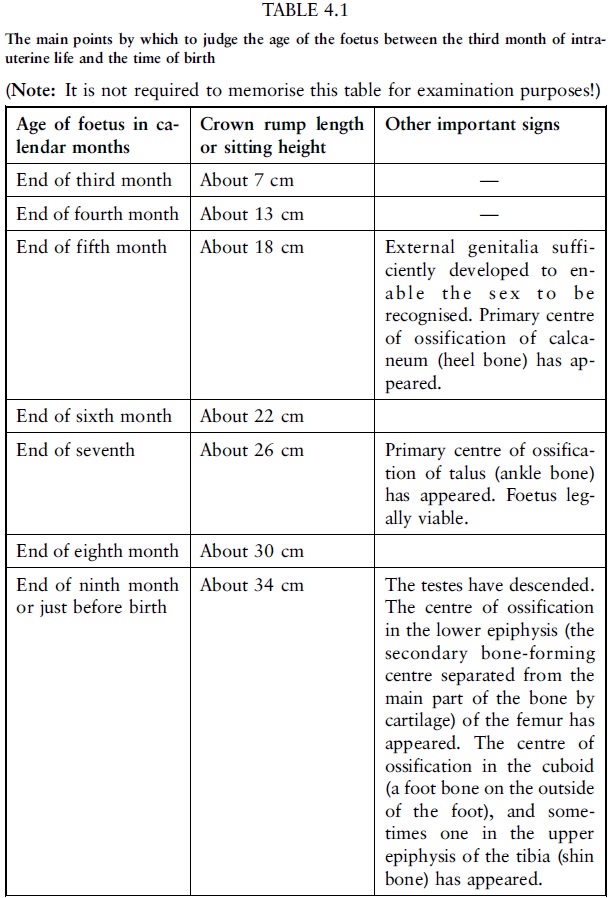 The primary centres of ossification in the long bones, scapulae (shoulder blades), hip bones, bodies of the vertebrae and in the skull bones begin to appear about the eighth week. However, up to the end of the third month the foetus is too small for this to be of great importance. By the sixteenth week, that is during the fourth month, parts of the foetal skeleton can be shown on a good X-ray of the mother's abdomen. From that time onwards the vertebral column of the foetus becomes well defined, the approximate sitting height can be determined from the X-ray, and the age judged by reference to table 4.1. If the remains of a pregnant uterus are removed from the pelvis, parts of the foetal skeleton can be shown by X-ray somewhat earlier than the sixteenth week. 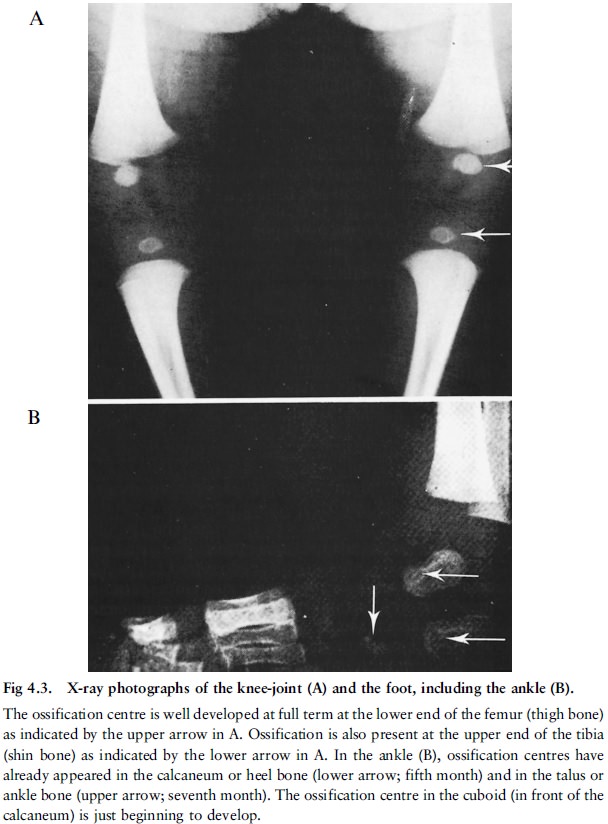 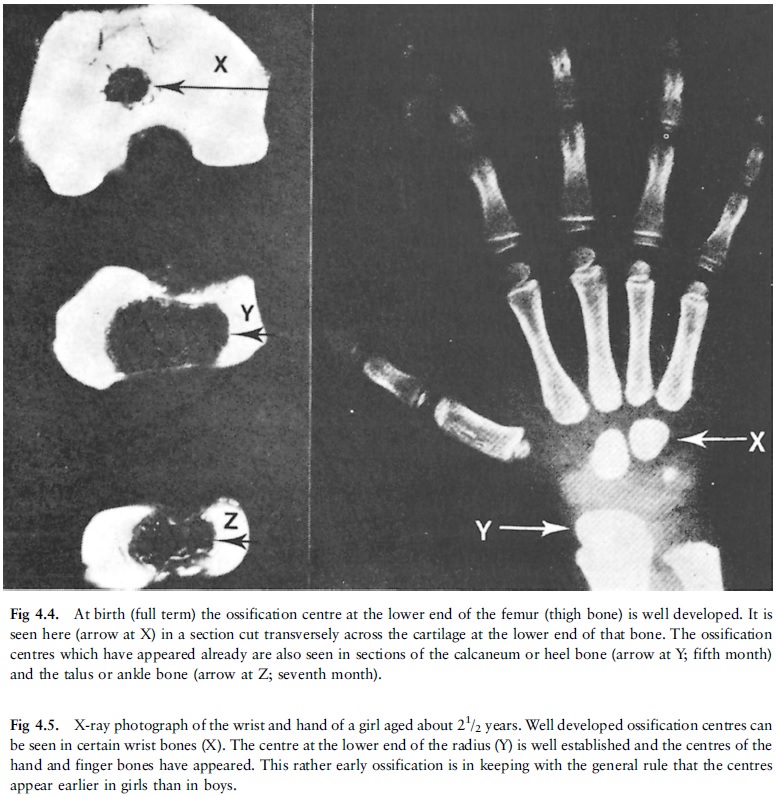 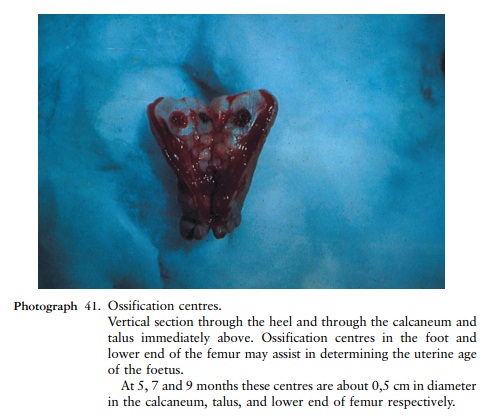 During infancy and childhood a fairly accurate estimate of age can be made from the teeth and the time at which epiphyses of the long bones appear. (Special textbooks should be consulted for this information.) During adolescence, until the growth is completed, age is judged by the time at which the epiphyses unite with the shafts of the long bones. This combined data allows one to determine the age to within about two years, because it is necessary to allow for individual variations, the range of variation being about one year in either direction. Further, the skeleton of the female matures about two years earlier than that of the male.

The centres of ossification of the small bones of the carpus (wrist) and those for most of the epiphyses of the long bones appear during infancy and childhood (fig 4.7).

The fusion of the epiphyses with the shafts to form the adult bone takes place as a rule between the ages of 18 and 22 years; at an earlier age for certain epiphyses, and at a later age for others where the growth in the length of the bone continues for a longer period. The periods of the fusion of epiphyses which have been established through anatomical evidence or from X-rays may differ by as much as three years, X-ray studies giving earlier times of fusion. The fact that individual variations may occur is of particular importance in estimating the age of living persons for legal purposes by X-ray examinations. Allowance must also be made for sex differences when calculating the periods of fusion.

The role of the skull in determining age (fig 4.8)

The skull is usually only used for age determination after the twenty-third year because the sutures (interlocking lines of fusion of the separate skull bones) close in a specific sequence. In addition, the skull gives two important indications of age:

·              The closure of the anterior fontanelle (the diamond-shaped space on top at the front of the skull of the newborn infant). This space closes completely from about 18 to 24 months.

After the age of 23 the only guide is the gradual disappearance of the cranial (skull) sutures. At the age of about 60 all the parts of the skull sutures will show signs of bony union, except in the temporal region, which may not unite until extreme old age. Note that the age-periods are given in decades because the periods during which the bony bridges across the sutures appear, vary from person to person. Due to this overlap assessment must be done by an expert in this field, and not be too dogmatic. 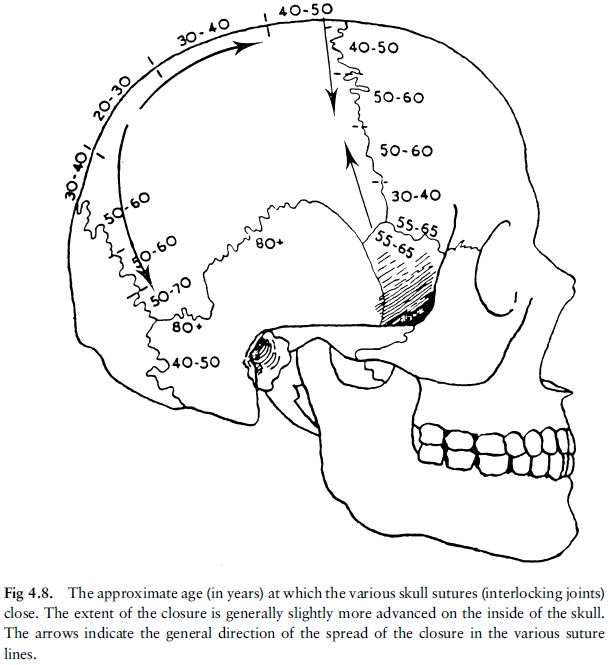 To determine the age of someone younger than 21 years, two elements of tooth development are used, namely calcification and formation, and eruption. Although determining the stage of eruption is a popular method of calculating age, it is not always accurate since there are meaningful differences in the eruption times of teeth. The eruption time can be influenced by, for example, genetic and environmental factors, socio-economic status, hormonal imbalance and chronic diseases. Stages of tooth eruption can be used as a general guideline, but must always be confirmed by the developmental stage of the teeth. The development of the teeth is generally reflected in their state of calcification and this can be observed in roentgenological photos (X-rays). Published charts giving the stages of tooth development assist in determining age precisely. The stage of development of the first permanent molar, for example, is a good indication of age up to about nine years. Between the ages of 14 and 20 years it is difficult to be accurate and therefore the development stages of the second and third molars are also taken into account. According to a study by NortjeÂ in which the ages of patients were compared with the radiographic appearances of the developmental stage of the root of the third mandibular molar, the age of an unknown person of between 15 and 21 years can be determined to within an accuracy of 2 to 4 years.

It is even possible to determine the age of a foetus by studying the development stage of the milk teeth roentgenologically and histologically. By seven months the dentine of the top front milk teeth, for example, is 3 mm thick. At birth there is a short period when the hard tissue of the teeth is formed, and this is shown in the dentine and enamel as a clear neonatal line. The quantity of dentine formed before birth thus gives an indication of the age, since 4 micrometer dentine is formed daily until the tooth is fully formed. The easiest method is, however, to take good roentgen photos of the root areas of teeth and to use these to investigate the age.

When teeth formation has ended (by 21 years) a series of additional changes in the teeth is used in the calculation of age. Some of these changes are the wearing-away of the masticatory areas of the crowns, pulling away of the gums, deposits of secondary dentine in the pulp, deposits of cement at the point of the root, resorption at the point of the root, and an increase in the translucency of the root as a result of intensified calcification in the dentine of the root (fig 4.15). These changes are measured according to a detailed chart and points are allocated. The total is then an indication of the person's age. This technique has the advantage that age can be determined even when all the bony sutures have closed and no other method remains than an examination of the teeth. 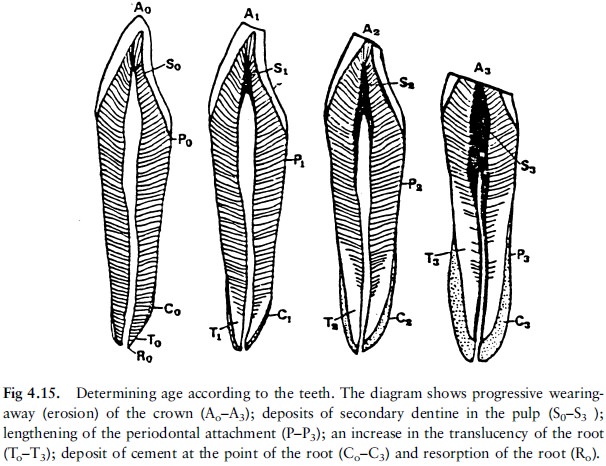