Food-borne parasitic diseases are a major public health problem affecting millions of people, predomi-nantly in nonindustrialized countries. The incidence of parasitic disease associated with the consumption of foods of animal origin has declined in industrial-ized countries in recent years, where improvements in animal husbandry and meat inspection have led to considerable safety and quality gains. The situation in nonindustrialized countries is very different, in that these diseases are associated with poor standards of sanitation and hygiene, low educational standards, and extreme poverty.

Parasites are organisms that live off other living organisms, known as hosts. They may be transmitted from animals to humans, from humans to humans, or from humans to animals. Food-borne parasitic disease occurs when the infective stages of parasites are eaten in raw or partially cooked protein foods, or in raw vegetables and fruits that are inadequately washed before consumption. These organisms then live and reproduce within the tissues and organs of infected human and animal hosts, and are often excreted in feces. The parasites involved in food-borne disease usually have complex life cycles involving one or two intermediate hosts (Figure 14.1). The food-borne parasites known to cause disease in humans are broadly classified as helminths (multicellular worms) and protozoa (single-celled microscopic organisms). These include the major helminthic groups of trema-todes, nematodes, and cestodes, and some of the emerging protozoan pathogens, such as cryptospo-ridia and cyclospora. The illnesses they can cause range from mild discomfort to debilitating illness and possibly death. 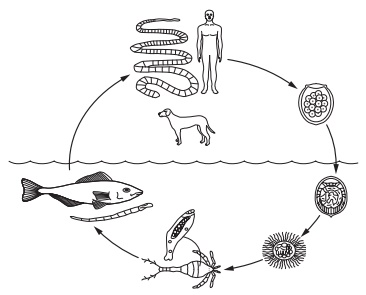 These infections occur endemically in some 20 countries, where it is estimated that over 40 million people worldwide, mainly in eastern and southern Asia, are affected. Of major concern are the fish-borne trematode infections. The trematode species con-cerned all have similar life cycles involving two inter-mediate hosts. The definitive host is man and other mammals.

Food-borne infection takes place through the consumption of raw, undercooked, or otherwise underprocessed freshwater fish or crustaceans con-taining the infective stages (metacercariae) of these parasites. Table 14.4 summarizes the distribution, the principal reservoirs, and freshwater fish or crus-taceans involved in the transmission of these parasites in the food chain. The most important parasites with respect to the numbers of people affected are species of the genera Clonorchis, Opisthorchis, and Paragoni-mus. The diseases caused by food-borne trematodes include cholangiocarcinoma, gallstones, severe liver disease, and gastrointestinal problems. 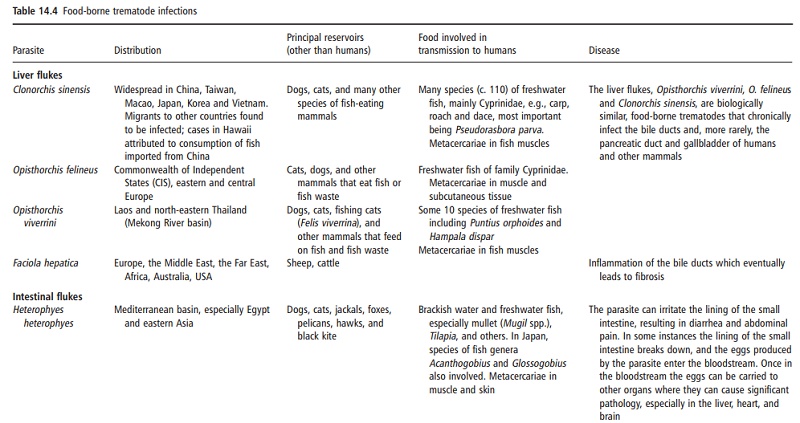 The food-borne roundworms of primary importance in humans belong to the phylum Nematoda and are known as nematodes. Undercooked or raw fishery products and pork meat are the usual foods involved.

Where fishery products are the food vector, the definitive hosts of roundworms causing disease in humans are piscivorous marine mammals such as seals. Marine invertebrates and fish are the two inter-mediate hosts and humans are infected when they consume raw or minimally processed products. Fish are the secondary hosts and are infected when they consume the invertebrate primary host or fish that are already infected. There are many species of nematodes and a very large number of species of fish, worldwide, that are known to act as intermediate hosts. The most common species of nematode causing disease in humans is Anisakis simplex, sometimes referred to as the herringworm. The other species involved in anisa-kiasis in North America, Europe, and Japan is Pseudo-terranova decipiens (the codworm or sealworm).

Nematodes are commonly present in fish caught in the wild, most frequently in the liver and belly cavity, but can also occur in the flesh. Anisakiasis is an uncommon disease because the parasite is killed by heating (55°C for 1 min), and by freezing (−20°C for 24 h). There is a risk of illness from fishery products consumed raw, for example sushi, or after only mild processing, such as salting at low concentrations or smoking. Many countries now require that fish used for these mildly processed products be frozen before processing or before sale.

Trichinella spiralis is the cause of trichinosis in humans. This most commonly results from the con-sumption of contaminated raw or undercooked pork or pork products. Since the mid-1980s outbreaks have been associated with raw and undercooked horse-meat. Isolated cases have been reported from the con-sumption of bear meat and ground beef in the USA. The incidence of trichinosis can be controlled by avoiding feeding infected waste foods to pigs or by fully cooking pig swill. Freezing pork products (−15°C for 20 days) or thorough cooking (78°C at the thermal center) before human consumption will destroy tri-china larvae.

Cestodes are tapeworms and the species of major concern associated with consumption of fish is the fish tapeworm, Diphyllobothrium latum. Humans are one of the definitive hosts, along with other fish-eating mammals. Freshwater copepods and fish are the intermediate hosts. The plerocercoid is present in the flesh of the fish and infects humans following the consumption of raw or minimally processed fish. The recorded epidemiology of D. latum shows it to be prevalent in many countries worldwide. The inci-dence is relatively high in Scandinavia and the Baltic region of Europe. Diphyllobothriasis in humans can be prevented by cooking or freezing fish before con-sumption. Infections with tapeworms are also associ-ated with eating undercooked or raw pork and beef.

Taenia saginata (the beef tapeworm) and Taenia solium (the pork tapeworm) are unique among para-sites in that they have no vascular, respiratory, or digestive systems. Humans are their definitive hosts and they rely solely on the human body for all of their nourishment. Infections can be prevented by sanitary disposal and treatment of human waste and by thorough cooking and freezing of contaminated pork and beef.

The protozoal human parasites are unicellular organ-isms that colonize the intestinal epithelium and form cysts. These are excreted and may survive for long periods in the environment. There are five genera of concern in foods: Giardia, Entamoeba, Toxoplasma, Cyclospora, and Cryptosporidium.

Table 14.5 summarizes the distribution, principal reservoirs and route of transmission of these parasites in the food chain. 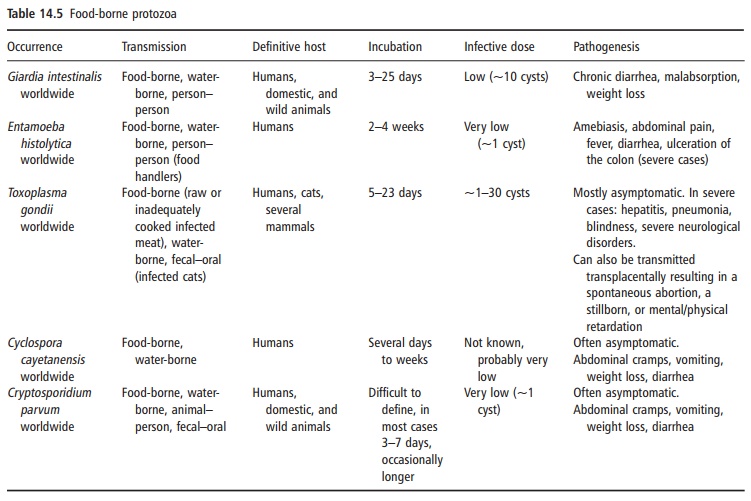