Some herbs are used extensively as seasoning. These are often imported in the form of dried powdered plant parts, usually rhizomes, roots or leaves.

Some herbs are used extensively as seasoning. These are often imported in the form of dried powdered plant parts, usually rhizomes, roots or leaves. Again it would be easy to introduce useless or sometimes even poisonous adulterants which would be difficult to detect with the naked eye. We have examined samples of dried mint, Mentha species, for purity, only to find considerable quantities of Corylus (hazel) leaf fragments included! Ailanthus leaf has also been used as a mint adulterant.

With the advent of the Trade Descriptions Act in the UK, manufactur-ers must state the contents of food products. It is essential for them to have adequate quality control, and to be able to identify all the materials they use.

Foreign bodies sometimes get into food by accident. Often these are small and fragmentary and can be identified only with the microscope. A splinter of wood in butter was found to come from a species ofPinus. The importer and packers hoped to be able to determine if the splinter could have come from the country of origin of the butter, or whether it might have been introduced during the packing stages. Buns and cakes containing sul-tanas periodically also contain other fruits which have become mixed with the sultanas during the drying process, when the sultanas are laid out in the sun. Medicago fruits are often involved. Some of these are prickly and un-pleasant to eat! We have examined an object from a tin of baked beans which looked remarkably like a piece of a mouse. It turned out to be a piece of rhi-zome from the parent plant. It is often the case that odd-looking inclusions in food are only pieces of the parent plants.

Vitis, grape vine, stems have been found in currant buns, an Avena cole-optile, looking like a mouse tail, was present in a meat pie, and so on. Figure 9.3 shows an unsavoury looking shoot from a potato which occurred in a meat pie. 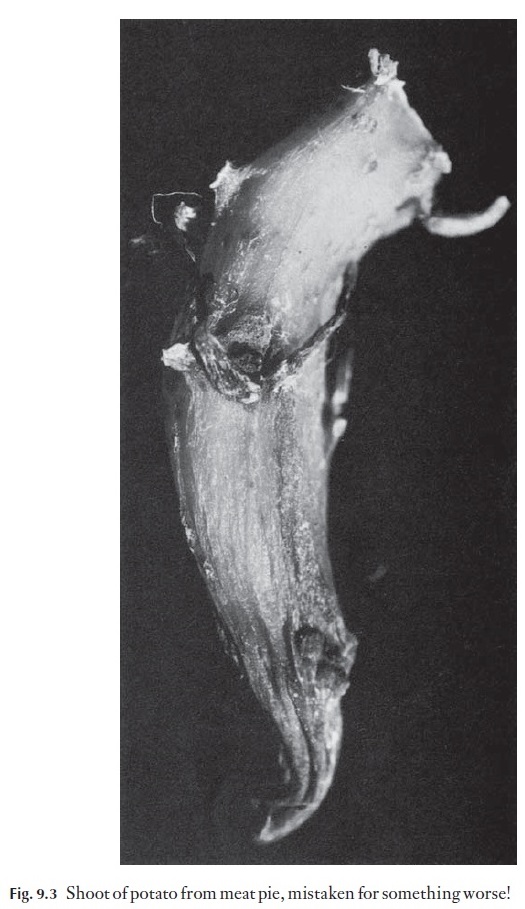 Starches from various plants have quite distinctive grain or granule fea-tures, so it is often possible to see if the stated materials have been used in a product unless the grains have become too hydrolysed (Fig. 9.4).

Animal feeds are made from the byproducts of other food manufactur-ing processes, or from seeds and fruits grown especially for the purpose. 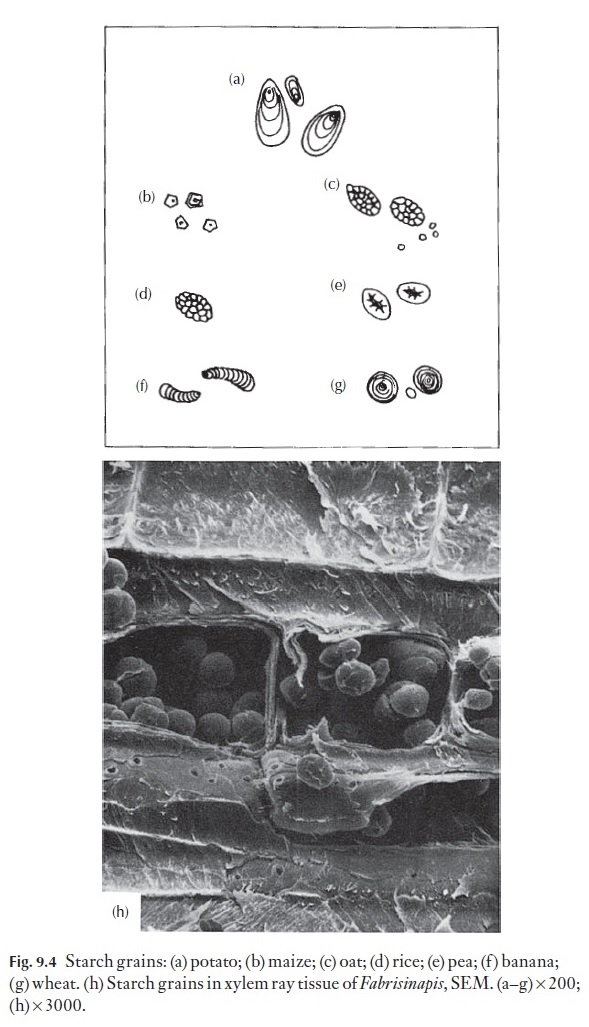 When ground as a powder the constituents are difficult to detect by meth-ods other than microscopy. There is plenty of scope for adulteration in feeds, and careful microscopical quality control is essential.

There are also examples of marjoram being adulterated with Cistus. These impurities were readily spotted, because some hairs did correspond to the species labelled while others corresponded to the adulterant, thus revealing a mixture.

Mucuna hairs, from the fruit pods, are very sharp and brittle, and containan oil that is irritant. We came across them being used by a landlord who wished to evict a tenant. He had sprinkled them liberally in the blankets of a bed, causing the tenant to come out in a rash! A sample of the fine powder composed of hairs was sent to the New York Botanical Garden for identifi-cation because it was used as an irritant in mail to a judge. The sample turned out to be the specialized hairs, glochids, of the cactus genus Opuntia, which traditionally were used as itching powder. Hedera helix (ivy) hairs on a garment have been valuable in helping identify the scene of a crime in a re-cent murder case. In another murder case, fragments of partly decomposed oak (Quercus) leaves on shoes could be identified on a range of anatomical characters, including hairs. This with other evidence showed that a suspect had been near the place that a body had been found.

Tobacco (Nicotiana), together with other members of the Solanaceae, have rather characteristic glandular hairs. Some small cigars are enclosed in a paper made from macerated tobacco plant. In Great Britain, the law states that such cigars must be made entirely of tobacco. At Kew, we once looked at some so-called tobacco papers to ensure that only Nicotiana had been used. The presence of glandular hairs of the correct type was quickly established, and epidermal cells with sinuous walls were also found. However, we also discovered some hardwood vessel elements and softwood tracheids, and obviously other pulp had been added to strengthen the paper.