Foods can be preserved by a variety of methods. It is vital to eliminate or reduce the populations of spoilage and disease – causing microorganisms and to maintain the microbiological quality of a food with proper storage and packaging.

Foods can be preserved by a variety of methods. It is vital to eliminate or reduce the populations of spoilage and disease – causing microorganisms and to maintain the microbiological quality of a food with proper storage and packaging. Contamination often occurs after a package or can is opened and just before the food is served. This can proved an ideal opportunity for growth and transmission of pathogens, if care is not taken. Preservation of food is the process by which food is stored by special methods. Cooked or uncooked food can be preserved in different ways to be used later Table 5.2. 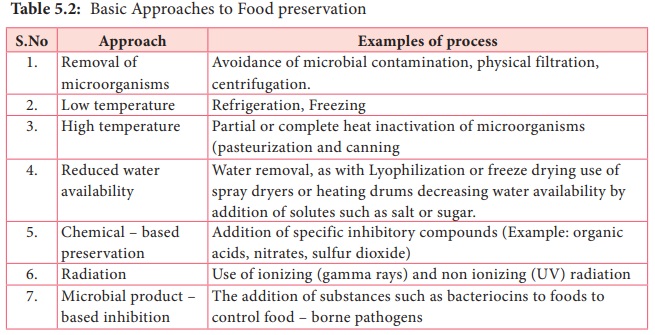 Some methods of preservation are:

Food kept in a refrigerator remains fresh for some day. Germs do not grow easily in cool places. We preserve food items, like milk, fruit, vegetable and cooked food by keeping them in a refrigerator.

By this method, we can preserve food for a short period of time. Germs in milk are killed by pasteurization. It is done by boiling milk for sometimes and then cooling it quickly.

Sugar act as a preservative when added in large quantities. For example, food can be stored for a long time in the form of jams, jellies and murabbas (Figure 5.2) by adding sugar. 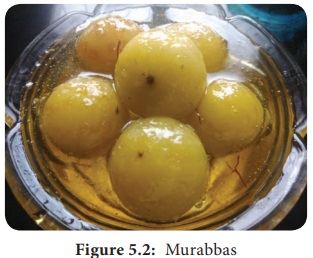 In this method, the food items are dried in sun to stop the growth of bacteria in them. Certain foods, like raw mangoes, fishes, potato chips and papads are preserved by this method.

In this method, food is processed and sealed in airtight cans. Food items like vegetables, seafood, and dairy product are preserved through this method.

• Germs do not grow easily in preserved food and make it safe to eat.

• Preservation enables us to enjoy seasonal fruits like strawberries and mangoes even during the off season.

• Excess salt and sugar are used in the preservation of food which is not good for health.

• Some methods of food preservation may lead to loss of nutrients

7. Microbial product – based inhibition: The addition of substances such as bacteriocins to foods to control food – borne pathogens

Minor errors in canning have led to major typhoid outbreaks. In 1964 canned beef produced in South America was cooled, after sterilization with non chlorinated water. The vacuum created when the cans were cooled drew Salmonella typhi into some of the cans, which were not completely sealed. This contaminated product was later sliced in an Aberdeen, Scotland, Food store and the meat slicer became a continuing contamination source the result was a major epidemic that involved 400 people. The Salmonella typhi was a South American strain and eventually the contamination was traced to the contaminated water used to cool the cans. This emphasizes the importance of careful food processing and handling to control the spread of disease during food production and preparation.

In accomplishing the preservation of foods by the various methods, the following principles are involved.

1. Prevention or delay of microbial decomposition.

a. By keeping out microorganism (asepsis)

b. By removal of microorganism. Example: Filtration

d. By killing the microorganism Example: Heat or radiation

2. Prevention or delay of self – decomposition of the food.

a. By destruction or inactivation of food enzymes Example: Blanching

b. By prevention or delay of purely chemical reactions Example: Prevention of oxidation by means of antioxidants.

3. Prevention of damage because of insects, animals, mechanical causes, etc.