There are about 2000 varieties of cheese made from mammalian milk.

There are about 2000 varieties of cheese made from mammalian milk. Cheese is thought to have originated in south western Asia some 8000 years ago. The Romans encouraged technical improvements and stimulated the development of new varieties during their invasion in Europe between 60 B.C and A.D. 300. The cheese name is derived from Latin name caseus (Figure 5.5). 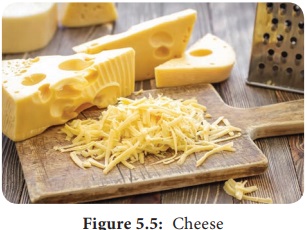 They are two groups of cheese, fresh cheese and ripened cheese. The fresh cheese are made up of milk coagulated by acid or high heat. Example: cottage cheese. Ripened cheese are made through lactic acid bacterial fermentation and coagulated by an enzyme preparation. The curd is removed and salted and whey is separated. The salted curd is held in controlled environment. During this process, various physical and chemical changes occur to give a characteristic flavour and texture. So the mammalian origin of milk influences the flavour and aroma of a natural ripened cheese.

A large number of microorganisms plays a role in the ripening process. On the first day of cheese making process, the microbial number in the starting material ranges from one to two billion. Therefore, the production declines because of insufficient oxygen, high acidity and the presence of inhibitory compounds that are produced as the cheese ripens. It is mainly the action of their cellular enzymes on lactose, fat and proteins that creates the ripened cheese flavour. The gas forming culture of Propionibacterium shermanii is essential for giving swiss cheese its eye, or holes and flavour (Figure 5.6). 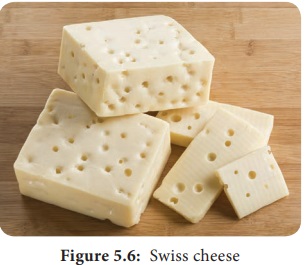 The specificity of cheese depends upon the varieties of microorganisms used. The process of cheese making, involves nine steps:

a. Preparing the milk

b. Forming a curd.

i. Ripening the young cheese

Cheese can be divided among different categories or types, according to their firmness. There are various system for classifying cheese and there are variations within each system (Table 5.6). 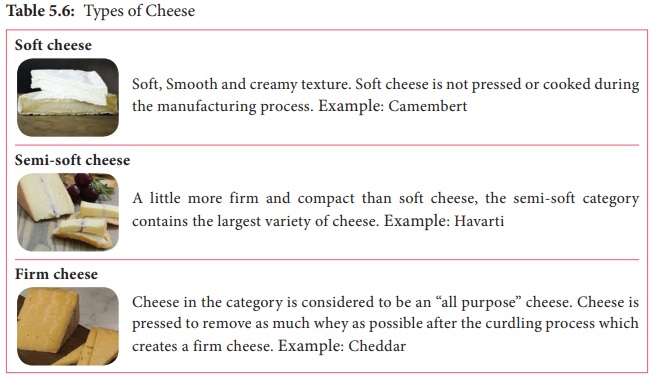 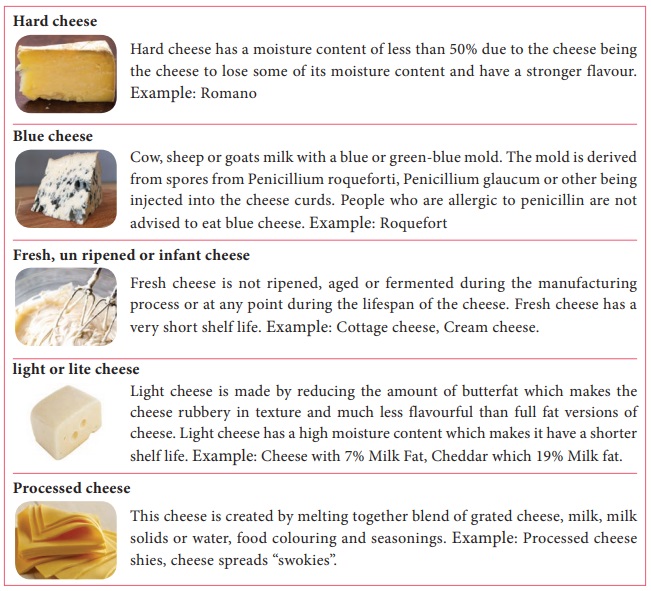 Soft, Smooth and creamy texture. Soft cheese is not pressed or cooked during the manufacturing process. Example: Camembert

A little more firm and compact than soft cheese, the semi-soft category contains the largest variety of cheese. Example: Havarti

Cheese in the category is considered to be an “all purpose” cheese. Cheese is pressed to remove as much whey as possible after the curdling process which creates a firm cheese. Example: Cheddar

Cow, sheep or goats milk with a blue or green-blue mold. The mold is derived from spores from Penicillium roqueforti, Penicillium glaucum or other being injected into the cheese curds. People who are allergic to penicillin are not advised to eat blue cheese. Example: Roquefort

Fresh cheese is not ripened, aged or fermented during the manufacturing process or at any point during the lifespan of the cheese. Fresh cheese has a very short shelf life. Example: Cottage cheese, Cream cheese.

Light cheese is made by reducing the amount of butterfat which makes the cheese rubbery in texture and much less flavourful than full fat versions of cheese. Light cheese has a high moisture content which makes it have a shorter shelf life. Example: Cheese with 7% Milk Fat, Cheddar which 19% Milk fat.