The area of dairy microbiology is large and diverse. The bacteria in dairy products may cause disease or spoilage.

The area of dairy microbiology is large and diverse. The bacteria in dairy products may cause disease or spoilage. Some bacteria may be specifically added to milk for fermentation to produce products like yoghurts and cheese (Figure 5.3). 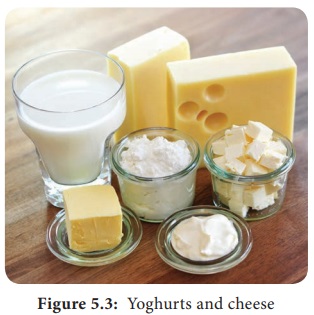 Milk is the fluid, secreted by mammals for the nourishment of their young ones. It is in liquid form without having any colostrum. The milk contains water, fat, protein and lactose. About 80–85% of the protein is casein. Due to moderate pH (6.4–6.6), good quantity of nutrients and high water content, milk an excellent nutrient for the microbial growth. (Flowchart 5.2). 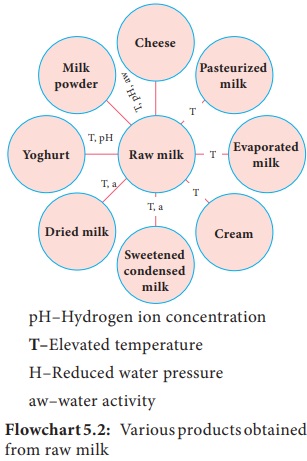 Milk is considered to be the “Most nearly perfect” food for man and hence is one of the most important ingredients of the diet. It is an extremely complex mixture and usually contains (Table 5.3). 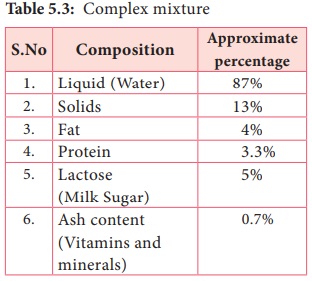 Sources of Microorganisms in Milk

• Three sources contribute to the microorganism found in milk the udder interior, the teat exterior and its immediate surroundings, and the milking and milk handling equipment.

• Bacteria that get on to the outside of the teat may be able to invade the opening and hence the udder interior. The organisms most commonly isolated are Micrococcus, Streptococci and the diptheroid Corynebacterium bovis. Aseptically taken milk from a healthy cow normally contains low number of organisms, typically fewer than 102–103 cfu ml-1

• The udder exterior and its immediate environment can be contaminated with organisms from the cow’s general environment. Heavily contaminated teats have been reported to contribute up to 105 cfu ml-1 in the milk. Contamination from bedding and manure can be source of human pathogens such as E.Coli, Campylobacter, Salmonella, Bacillus spp. and Clostridia spp.

• Milk – handling equipment such as teat cups, pipe work, milk holders and storage tanks is the principal source of the microorganisms found in raw milk. Micrococcus and Enterococcus.

Microbiological Standard and Grading of Milk

• Coliforms count in raw milk is satisfactory if, coliforms are absent in 1:100 dilution.

• Coliforms count in pasteurized milk is satisfactory is coliforms are absent in 1: 10 dilution (Table 5.4)

The quality of milk is judged by certain standards and it is known as grading milk. Grading of milk is based upon regulations pertaining to production, processing and distribution. This includes sanitation, pasteurization, holding conditions and microbiological standards. The U.S public health secrine publication “Milk ordinance and code” shows the following chemical, bacteriological and temperature standards for grade A milk and milk products.

Methylene blue dye reduction test commonly known as MBRT test is used as a quick method to access the microbiological quality of raw and pasteurized milk. This test is based on the fact that the blue colour of the dye solution added to the milk get decolorized when the oxygen present in the milk get exhausted due to microbial activity. The sooner the de colorization, more inferior is the bacteriological quality of milk assumed to be MBRT test may be utilized for grading of milk which may be useful for the milk processor to take a decision on further processing of milk.

The test has to be done under sterile conditions. Take 10ml milk sample in sterile MBRT test tube. Add 1 ml Methylene Blue dye solution (dye concentration 0.005%). Stopper the tubes with sterilized rubber stopper and carefully place them in a test tube stand dipped in a serological water bath maintained at 37°C, records this time as the beginning of the incubation period. Decolourization is considered complete when only a faint blue ring (about 5mm) persists at the top (Figure 5.4). 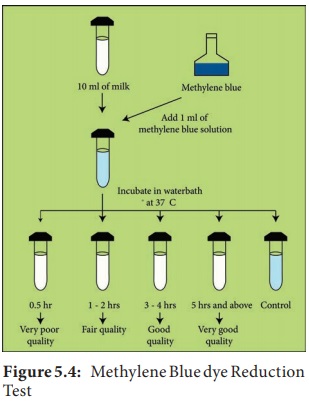 Recording of Results – During incubation, observe colour changes as follows:

a. If any sample is decolourized on incubation for 30 minutes, record the reduction time as MBRT 30 minutes.

b. Record such readings as, reduction times in whole hours. For example, if the colour disappears between 0.5 and 1.5 hour readings, record the result as MBRT 1 hour, similarly, if between 1.5 and 2.5 hours as MBRT-2 hour and so on.

c. Immediately after each, reading, remove and record all the decolourized samples and then gently invert the remaining tubes if the decolourization has not yet begun (Table 5.5).