FMEA is methodology for analyzing potential reliability problems early in the development cycle where it is easier to take actions to overcome the issues, thereby enhancing reliability through design .

FMEA is methodology for analyzing potential reliability problems early in the development cycle where it is easier to take actions to overcome the issues, thereby enhancing reliability through design .

FMEA is a procedure in operations management for analysis of potential failure modes within a system for classification by severity or determination of the effect of failures on the system. It is widely used in manufacturing industries in various phases of the product life cycle and is now increasingly finding use in the service industry. Failure modes are any errors or defects in a process, design, or item, especially those that affect the customer, and can be potential or actual. Effects analysis refers to studying the consequences of those failures. 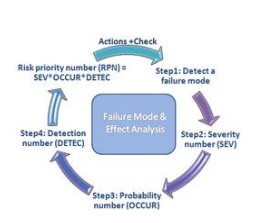 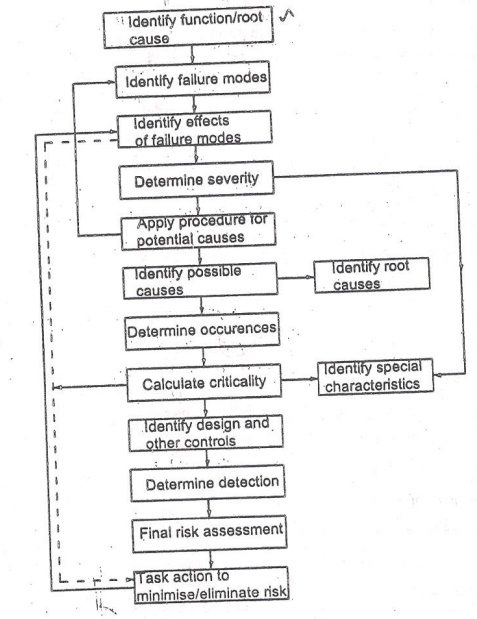 Failure mode: "The manner by which a failure is observed; it generally describes the way the failure occurs."

Failure effect: Immediate consequences of a failure on operation, function or functionality, or status of some item

Indenture levels: An identifier for item complexity. Complexity increases as levels are closer to one.

Local effect: The Failure effect as it applies to the item under analysis.

Failure cause: Defects in design, process, quality, or part application, which are the underlying cause of the failure or which initiate a process which leads to failure. Severity: "The consequences of a failure mode. Severity considers the worst potential consequence of a failure, determined by the degree of injury, property damage, or system damage that could ultimately

•        Improve the quality, reliability and safety of a product/process

•        Reduce the potential for warranty concerns

•        Catalyst for teamwork and idea exchange between functions

•        Reduce the possibility of same kind of failure in future

FMEA is effectively dependent on the members of the committee which examines product failures, it is limited by their experience of previous failures. If a failure mode cannot be identified, then external help is needed from consultants who are aware of the many different types of product failure. FMEA is thus part of a larger system of quality control, where documentation is vital to implementation. General texts and detailed publications are available in forensic engineering and failure analysis. It is a general requirement of many specific national and international standards that FMEA is used in evaluating product integrity. If used as a top-down tool, FMEA may only identify major failure modes in a system. Fault tree analysis (FTA) is better suited for "top-down" analysis. When used as a "bottom-up" tool FMEA can augment or complement FTA and identify many more causes and failure modes resulting in top-level symptoms. It is not able to discover complex failure modes involving multiple failures within a subsystem, or to FaultTree+ is a fully interactive graphics and analysis program for performing probabilistic risk assessment using integrated fault tree, event tree and Markov analyses..