Factors Influencing the Performance of Ball and Rolling Bearing

Factors Influencing the Performance of Ball and Rolling Bearing

There are many factors that affect the performance of ball and roller bearings. Some are obvious and some are not very obvious. This course starts out explaining the performance characteristics of the various ball and roller bearings. It then deals with some of the aspects affecting performance such as; how different types of bearing loads can affect expected life calculations; how the material used and different refining and heat treatment methods can improve bearing performance; how oil lube film thickness affects expected life; and what the effect of misalignment and preloading have on a machine tool bearing application. This course is intended to enhance the understanding of all the above to ensure that bearing application engineering will be a more successful venture.

Ball and roller bearings can be furnished with snap rings installed in grooves in the outer ring outside for mounting purposes.

high radial and high thrust loads and are often used in pairs (See Figures 4 and 5).

Following is a summary of Figure 6 which has a table of the characteristics of ball and roller bearings:

accuracy.  All  are  fair  for  shaft  misalignment.  Some  forms  are  good  for

mounting on both ends of a shaft. 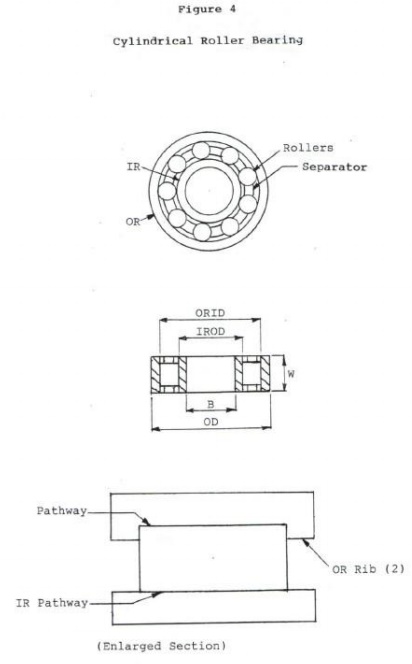 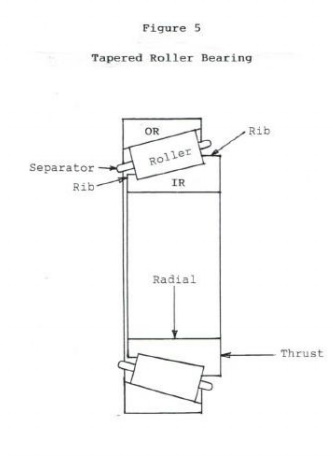 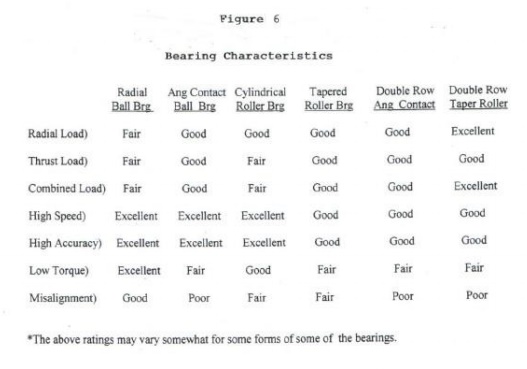 rotates with the outer ring, no factor is needed. If the load oscillates over

45o, multiply the load times 1.25. Oscillation less than 45o should be avoided because a condition called “false brinelling” can occur resulting in

damage to the bearing rings.

When there are a variety of load and speed conditions for a given application, the following equation is used

The composition, cleanliness and‐ condition of the material used to fabricate rolling contact bearings have a distinct effect on performance. The material used for most ball bearings is thru hardened AISI 52100 alloy steel. The primary

alloying elements are carbon, manganese and chrome. The high carbon content of 1.04% gives the steel responsiveness to heat treatment with corresponding very high strength and hardness. The manganese content of .35% acts as a deoxidizer (purifier) and also imparts strength and responsiveness to heat treatment. The chrome content of 1.45% increases response to heat treatment and depth of hardness penetration. An important part of steel is not only chemical composition, but its cleanliness or freedom from voids and impurities that come from the iron ore refining process. In bearing service, steel must withstand compressive stresses up to 500,000 psi. Impurities and voids in the

steel, especially if they are found in the load zone of a bearing, can cause an early failure. Many bearing manufacturers use AISI 52100 “vacuum degassed”. This

reducing the chance of an early failure. For extremely critical applications such as aircraft and aerospace bearings, “consumable electrode vacuum melt steel” is

used for even more improved cleanliness and bearing life The material used for roller bearings is case hardened AISI 8620. The primary alloying elements are .20% carbon, .80% manganese, .55% nickel, .50% chrome and .20% molybdenum. Nickel increases strength and toughness while molybdenum adds to the penetration of hardness and increases toughness. Case hardening involves heating the steel in a carbon rich atmosphere and quenching it producing a hard outer case and softer inner core. Roller bearings have a much higher spring rate than ball bearings‐. The hard outer case provides support‐of high compressive stresses while the softer inner core protects against shock loads. Tests have shown that case hardened steels perform as well as thru hardened steels. In the past, life improvements factors of 2 for AISI 52100 and 3 for AISI 8620 have been recommended because of improvements in steel cleanliness. Figure 7 shows the temperature limitation of some common bearing materials. 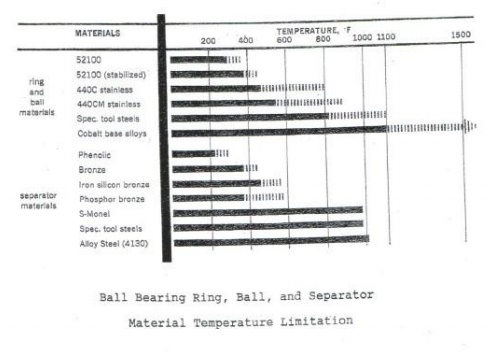 • They are machined from tubing that is of a special size to reduce cycle time.

• They are heat treated to a high hardness throughout.

• Every surface is fine ground.

• The pathways are honed to an even finer surface finish.

• Blanks are cut from steel wire.

• The blanks are cold formed into a spherical shape and heat treated.

• The spheres are ground to a fine finish.

• The spheres are then honed to a very fine super finish.

• The finished balls are separated into different diameter class sizes.

Ball bearings are assembled as follows:

end grain have a greater propensity to fail the ring than balls running on the grain itself. This is particularly true for angular contact ball bearings where the balls run higher up the pathway shoulder where end grain is more prevalent than at the center of the pathway where radial bearings run. Forging or roll forming ring blanks prior to further processing has been found to minimize exposed end grain resulting in improved bearing performance.

For normal conditions, the‐ best lubricant to use is mineral oil which is refined from petroleum. Synthetics have been developed that have good high temperature and good anti oxidation properties for special applications but they

don’t form elastohydrodynamic (EHD) films as well as mineral oils. EHD refers to the film of oil that builds up in the load zone between the rolling element and the rings of rolling contact bearings. It has been found through lab testing that there are several factors that influence the thickness of the film that builds up between

the rolling elements and rings. Oil films that are too thin compared to bearing surface finishes can result in performance less than predicted, while films that are thicker result in bearing life that exceeds calculated values.

The following equation is one that can be used to calculate bearing oil film:

Graphs of all the above factors have been developed which make it easy to calculate oil film thickness and its effect on bearing life. Use of the graphs simplified the equation down to the following: 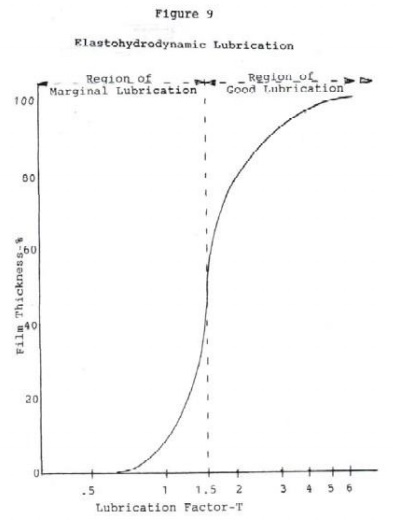 Misalignment refers to the angle made by the center line of the inner ring with respect to the centerline of the outer ring in a bearing. When the two centerlines

high amount of stress concentration which can lead to early failure. A feature called “crowning” is applied to rollers and rings to reduce edge loading under

Figure 12 has several different mounting arrangements for ball bearings. The top sketch has the left bearing fixed in the housing and the right bearing free to float. This type of mounting accommodates manufacturing tolerances and shaft thermal expansion without putting unwanted thrust load on the bearings. The middle sketch has both bearings free to float when shaft end play is not critical. The lower sketch has radial ball bearings with loading grooves which are used to load extra balls in the bearing for added capacity.

“face to face” to accommodate shaft misalignment. The lower sketch illustrates how two angular contact ball bearings can be mounted in “tandem” to 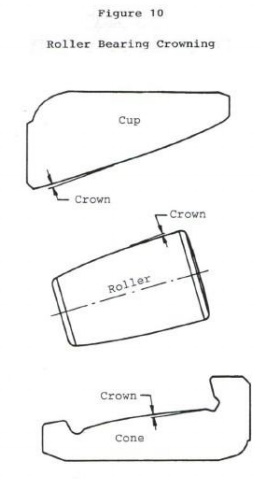 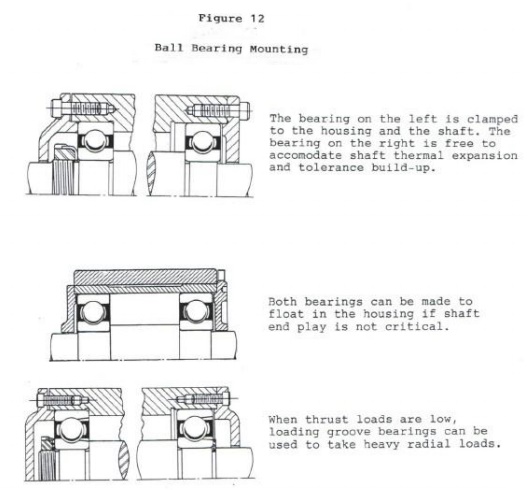 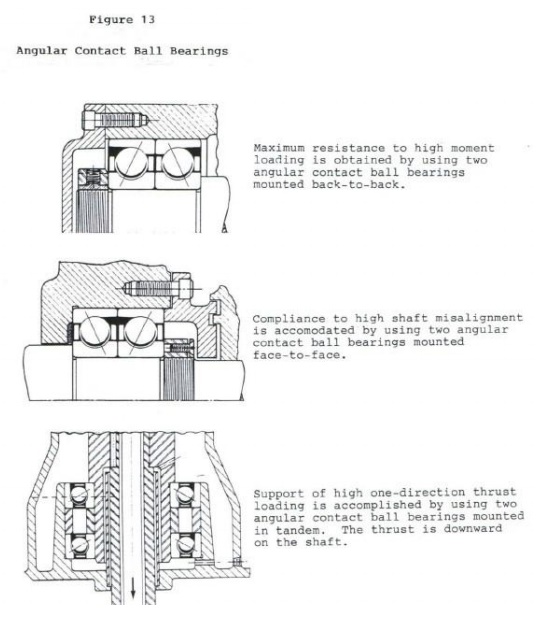 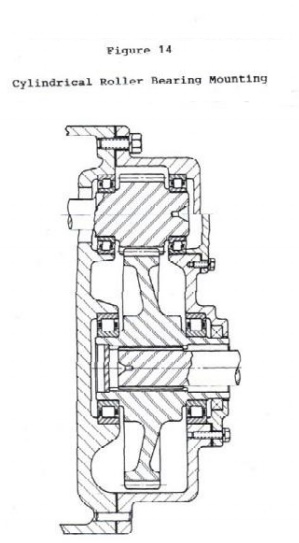 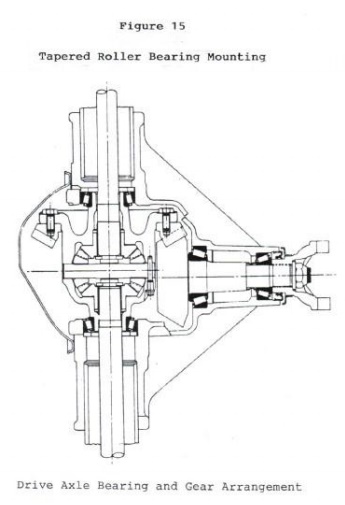 Preloading is a method of mounting bearings on a shaft, whereby one is thrust loaded against the other. On manufacturing machines, preloading is done to secure the shaft more rigidly so that the tool attached to it will machine production parts more accurately.

Figure 16 has a drawing of a machine tool spindle (small shaft) supported by two angular contact ball bearings. The inner rings of the two bearings are clamped tightly against the shaft shoulder. Each outer ring is mounted in its own sleeve. Torquing the nut N puts an axial load on the right hand bearing through sleeve B.

This load is then transferred through the clamped inner rings to the left bearing; preloading the bearings and putting the shaft in tension.

on the bearings and shaft. Then a work force of 2500 pounds is applied to the right on the front left end of the shaft. This additional force increases the load on

An analysis will show that the final load on the front bearing is 4500 pounds and the final load on the rear bearing is 2000 pounds. Both bearings are now operating above the steepest part of their load vs. deflection curve and are giving the shaft greater support. Without preload, the 2500 pound work load would have produced a shaft deflection of .003 inch while with preload, the deflection is down to .001 inch which is a big gain considering that some ball bearing components have manufacturing machining tolerances less than .0001 inch.

The calculated life of the left bearing with a 2.1654 inch bore and 4650 pound capacity under a 4500 pound thrust load equals:

The 3136 pound equivalent radial load was obtained from an industry catalog. The life of 5575 B10 hours is equivalent to operating the machine for 2.68 years at 40 hours per week. Angular contact ball bearings are an excellent choice for supporting machine tool spindles and shafts.

It then deals with some of the aspects affecting performance such as; how different types of bearing loads can affect expected life calculations; how the material used and different refining and heat treatment methods can improve bearing performance; how oil lube film thickness affects expected life; and what the effect of misalignment and preloading have on a machine tool bearing application. This course is intended to enhance the understanding of all the above to ensure that bearing application engineering will be a more successful venture. 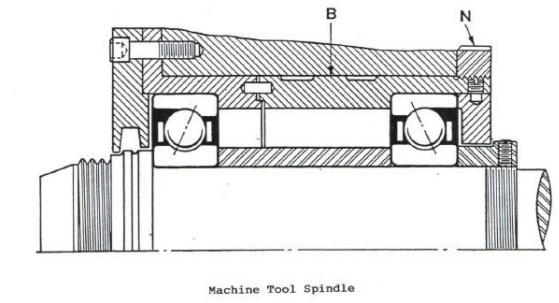