The main goal of the FMEA (Failure Mode and Effect Analysis) is to prevent failures. Therefor it belongs to the important tools of the quality planning.

The main goal of the FMEA (Failure Mode and Effect Analysis) is to prevent failures. Therefor it belongs to the important tools of the quality planning. It is assumed that the general meaning is known.

iQ-FMEA has been developed under various aspects:

it has to support the structured process of FMEA sessions through algorithms, tables and methods the history of a FMEA is to be shown for every step of improvement

experiences (knowledge base) of previous FMEAs have to be able to enter in current FMEAs. Therefor certain parts of a FMEA are emphasized as standard. They are independent of the current product or process. 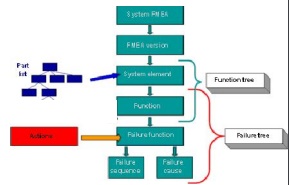 FMEA header, that contains general information for the most common standard forms FMEA versions; each version describes a segment of the FMEA-development

The structure elements in detail

entire status of the FMEA

FMEA can have several versions.

One version describes the FMEA progress from the realisation of corrective actions to the recommendation of further actions. A new version closes the predecessor.

cost input after each session; time and money investments in persons; direct costs cost cumulation over all sessions of a version and over the whole period of a FMEA divers further management data on version level

any number of system elements in a version

assignment of a system element to a SE class. This makes it possible to define arbitrarily structured search criteria (knowledge base).

SEs can be ordered hierarchically in a parts list structure

SEs within the SE hierarchy are in following relationship with each other: the function of the inferior SEs (rubberlip) builds a chain to the superior (sealing ring), the function tree

a failure can cause several consecutive failures

a failure can result from several reasons

you can assign the RPZ factor meaning to a failure sequence

you can assign the RPZ factor occurrence probability and detectability to a failure cause B, E and A from a catalogue, which can be created by the user (VDA, DGQ etc.)

structure and identification of FMEAs and SEs, which appear similar in other constructions or processes (for example bore for fit, rotation and parallel translation)

search algorithms based on class systems

adoption of already described SEs, depending on RPZ-experiences