Down lights are Spot lights when suspended.

As already brought out the components of an Illumination system are Lamp, the Radiation Source, Luminaire that directs and controls the light flux. Control Gear is the accessory that helps in controlling the requisite amount of flux on the work plane. Now we take a look at the accessories involved. First of these is Ballast. In a discharge lamp a series impedance to limit the current is required. If the current is allowed to increase there can be explosion of the lamp. This takes the form in a.c. as Inductance-w/o undue loss of power. This is called Ballast. It should have high power factor for economic use of the supply and should generate minimum harmonics. It should offer high impedance to audio frequencies. It should suppress-Electromagnetic interference (Radio interference-TV interference). It is essentially, a reactor of a wound coil on a magnetic core often called Choke and is in series with the lamp. Typical power factor is 0.5 Lag. Power factor is improved by having a capacitor connected across input lines.

Fig 1 shows the connection for a discharge lamp employing ballast formed by a reactor commonly known as choke. Fig 2 shows how the capacitor may be connected to improve the power factor. As may be seen the capacitor is placed in shunt. At times a lead circuit may result by placing a capacitor in series as shown in Fig 3. However, when a illumination system employing two lamps is used power factor may be improved by having one with a lead circuit and other with a lag circuit as shown in Fig. 4. Next important accessory is a starter that initiates the discharge in a discharge lamp. Starter is marked as ‘S’ in the Figs.1 to 4. Starter less circuit are shown in Fig 5. They employ pre-heated filament electrodes. The preheating obtained through a small portion of voltage tapped from the input source. 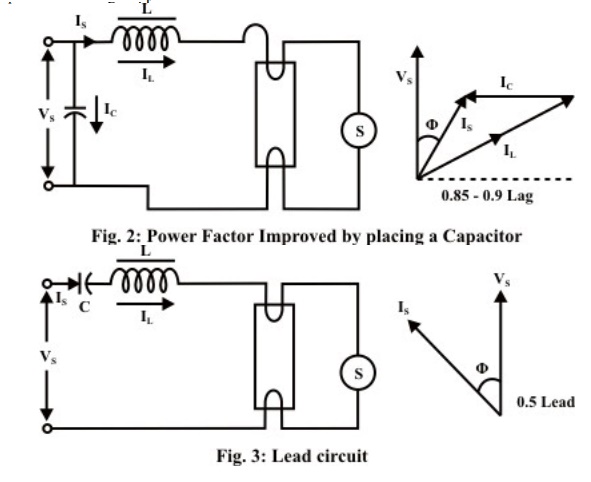 When discharge lamps are used on dc the ballast takes the form of a resistor together with associated power loss. These days they take the form of electronic ballast which converts dc to high frequency ac of around 20 kHZ.

Except high pressure mercury lamp where V > VS (starting) all lamps need a starting device. At times, it is integral part of a lamp. Switch start employs bimetallic strip that opens upon heating. Starterless, rapid start or instant starts are useful for outdoor applications. Other forms of starters employed are three electrode devices called igniters.

Visual comfort system is most common evaluation in the USA/Canada. This is expressed as percentage of people considering an installation comfortable as viewed from one end. Glare tables list various proportions and layout of room for glare free lighting. Figure of merit is based on a source of 1000 lm.from a luminaire. If VCP ≈ 70% then the system is said to be glare free. British method employs Zone of luminaire with a classification for quality of light expressed as Glare index. Luminance limit system is adopted in Australia. Standard code for Luminaire base lamp. dep. on room dimensions, mounting height and a Empirical shielding angle

Luminance limits for luminaires critical angles, γ are 45º < γ < 85º. Quality class is expressed from A to E type is based on Luminaire orientation. 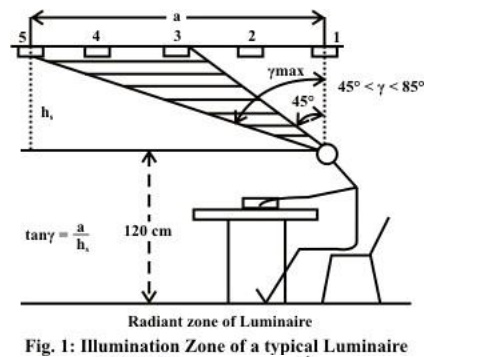 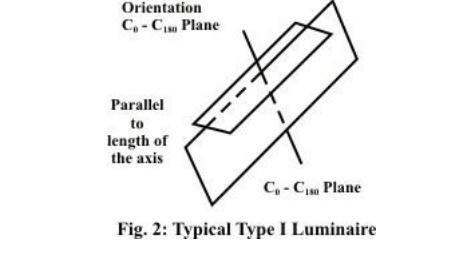 General light is predominantly light coming downwards. Typically reflectance of 0.5 for walls /ceiling and 0.25 for furniture. How is Glare evaluated?

6.        Compare luminance of one luminaire with selected part of the limiting curve.